The app is already gaining users among Kannadigas, and is available in Tamil, Telugu and Hindi with plans to add more languages. 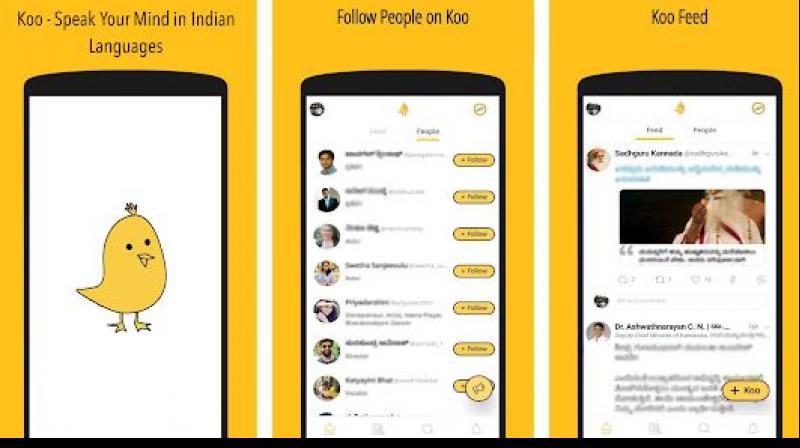 Pictured here are the Koo logo and screenshots of the app. Both the app and its logo are modelled on Twitter. Regional language users are expected to account for nearly 75% of India’s internet user base by 2021, according to a study by KPMG and Google.

Bengaluru: Following the ban on Chinese mobile applications and the Indian government encouraging the development of Made in India apps, two Bengaluru-based developers have come up with a Twitter-like microblogging site named Koo.

Available in various Indian languages, the Koo app is tailored for non-English speaking people, and is already gaining popularity as popular Kannadiga personalities such as cricketers Anil Kumble and Javagal Srinath and Karnataka Deputy Chief Minister Ashwath Narayan have taken to it.

Koo co-founder Aprameya Radhakrishnan said that he and Mayank Bidawatka developed the multilingual app as an inclusive social network for India, given that English is a major barrier to communication for most people in the country’s tier II and tier III cities.

Regional language users are expected to account for nearly 75% of India’s internet user base by 2021, according to a study by KPMG and Google. India has 22 official languages and Koo hopes to make strides in the market of a billion Indians who are left out by English-dominated social media platforms.

“The app, available in Kannada, Telugu, Tamil and Hindi, both on Android as well as iOS, has been downloaded by over half a million people,” Aprameya said. More languages will be added soon.

The name Koo itself is derived from a regional language. It is short for the Kannada word koogu meaning to call out to someone.