Technology   In Other news  16 May 2019  NaadSadhana: A Tabla-Swarmandal AI/ML jugalbandi app for classical singers, trainees
Technology, In Other news

The Swarmandal is one instrument that almost every classical singer in India needs. 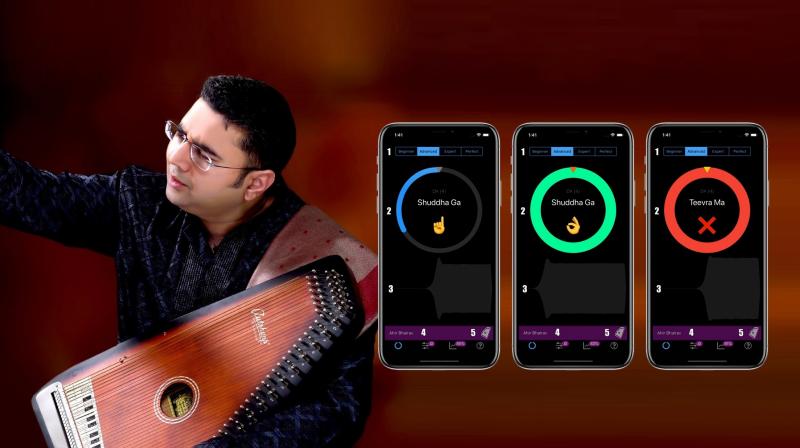 The app is presently available on the App Store for Rs 2,699, but Sandeep has other plans for its pricing. He is presently thinking of a subscription-based model which will be cheaper and also feature a trial version for newcomers. However, he hasn’t confirmed the dates for the same as yet, but has definitely said “soon”. The new app will also feature the Tabla and many more instruments in future releases and updates.

The Swarmandal is one instrument that almost every classical singer in India needs. It is an autoharp that creates a beautiful background soundscape when they perform or practice. With each of its 30+ strings tuned to the raga or scale, the background soundscape is the main ingredient that probably can be termed as salt in food, without which the Raag could sound drab. Owning a Swarmandal is not as cheap, but if you own one, you would know the painstaking time and efforts that go into tuning each of those 30+ strings. Experts too find it difficult to perfectly tune those musical strings, and it takes them an easy 30+45 minutes, if not less. Once perfected, it works magic but needs tuning time and again, which means more time wasted and effort each time.

So if you own one, you would already know the pain to maintain it. But what if we tell you that there is one remedy or alternative to owning a physical Swarmandal? Yes, your smartphone can be your Swarmandal, for dirt cheap, and with the additional benefits being tuned for a lifetime. No more wasting time and money on tuning that stringy instrument. 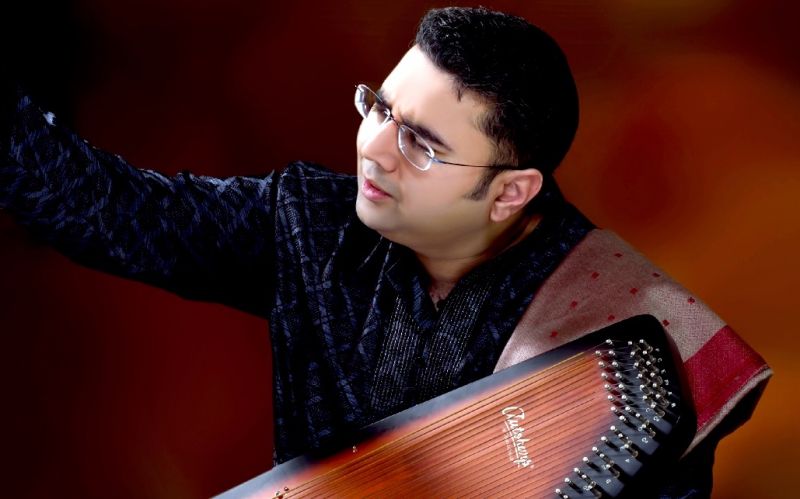 Sandeep Ranade, an experienced classical singer for 3.5 decades, is a Pune-based software engineer with a Masters Degree in Computer Science from Johns Hopkins University. He has an experience of over 15 years in tech that comprises of data storage, compression, operating system, big data and a lot more and has worked with top tech giants such as Microsoft, Citrix, VMWare and Google while living in the US. With a big hobby for classical singing and now mentored by Padma Vibhushan Sangeet Martand Pandit Jasraj, he composes and performs worldwide apart from teaching students of music across the globe. After giving up his job in the States, Sandeep has finally settled back home in Pune, Maharastra, to start his own ventures apart from being with his family. With barely year-old twins at home, the singer has been working effortlessly on something that crossed his mind that not only benefitted him but also benefits his students. 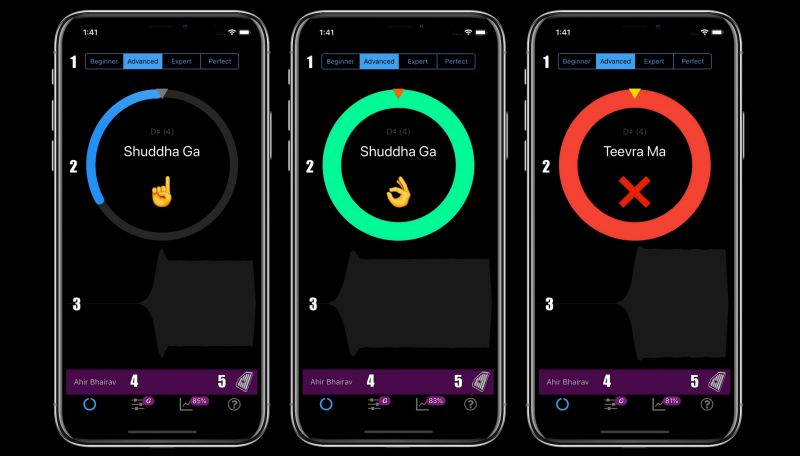 10 months later, in October 2018, he launched an iOS app that gained him attention on how he used his engineering experience to highly benefit classical singers, both practising and performing. NaadSadhana was the final name for the app and it includes a smart Swarmandal that helps singers practice and performs without actually playing it or having physical musicians seated beside him. With the app getting fine tuned and a few updates later, the app also helps him in solo performances around the globe. In short, ask Sandeep to sing you a Raaga and he will instantly pull out his iPhone and the AI-based Swarmandal on the NaadSadhana app will accompany him with his deep voice — no humans needed to pull strings.

NaadSadhana is an iOS-based app for iPhones and iPads, while the Mac version is being thought on for a later possibility. The app is an AI-based instrument player that currently has the Swarmandal in a smart form. NaadSadhana is an app that is meant for students of music and performing artists. In talks with Sandeep, the humble singer went all out to tell us why he came up with the NaadSadhana app. 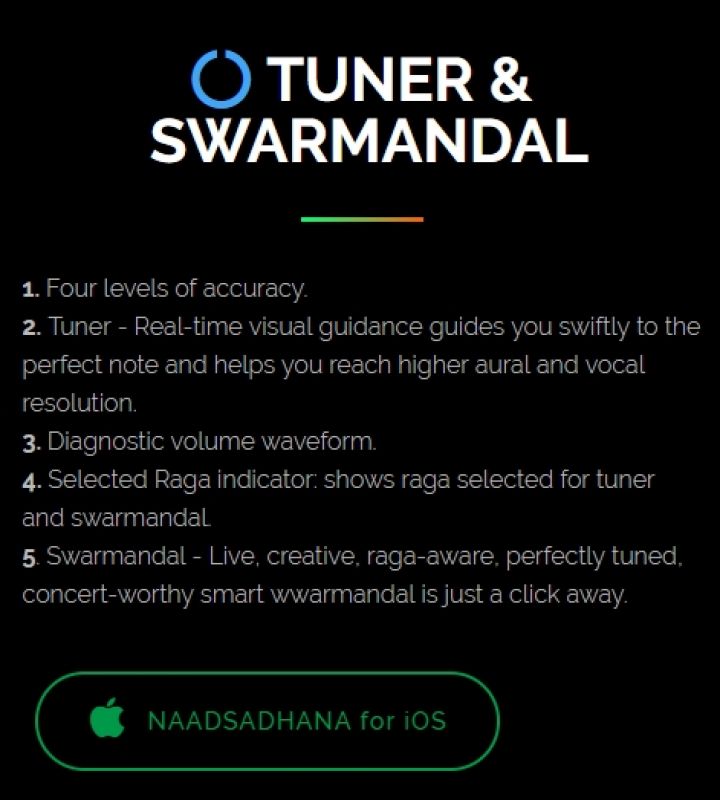 “In olden days, the guru would teach and practice with his students for at least 8 – 10 hours each day and the student would then practice around an hour back home. This leaves each student to get help from his guru with respect to correcting them when they go off tune and also with the necessary instruments when he is around. When the student is back home, he has to rely on the instruments he has at home, play it himself and practice accordingly. Today gurukuls are getting fewer and far between. Students learn for an hour or so per week and practice on their own, with no course correction from the guru, for 5-6 hours. As a result, neural pathways for inaccurate notes are being forged daily that the teacher cannot hope to fix with one hour of instruction a week. With the proliferation of teachers and students of Indian Music, we now have a massive problem at hand.” Says Sandeep. 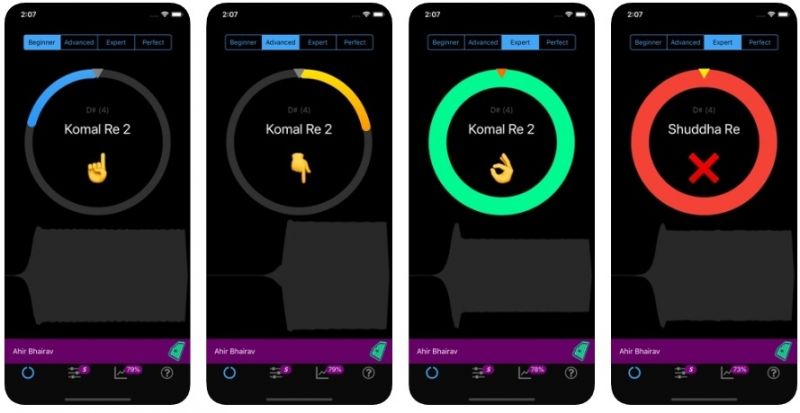 “Being a software developer myself and with the power of Apple’s iOS platform with equally powerful hardware, I was able to put myself into the app to help students self-practice on their own. My app includes a precision tuner and a smart Swarmandal instrument that gently guides students to perfect notes,” he continued. 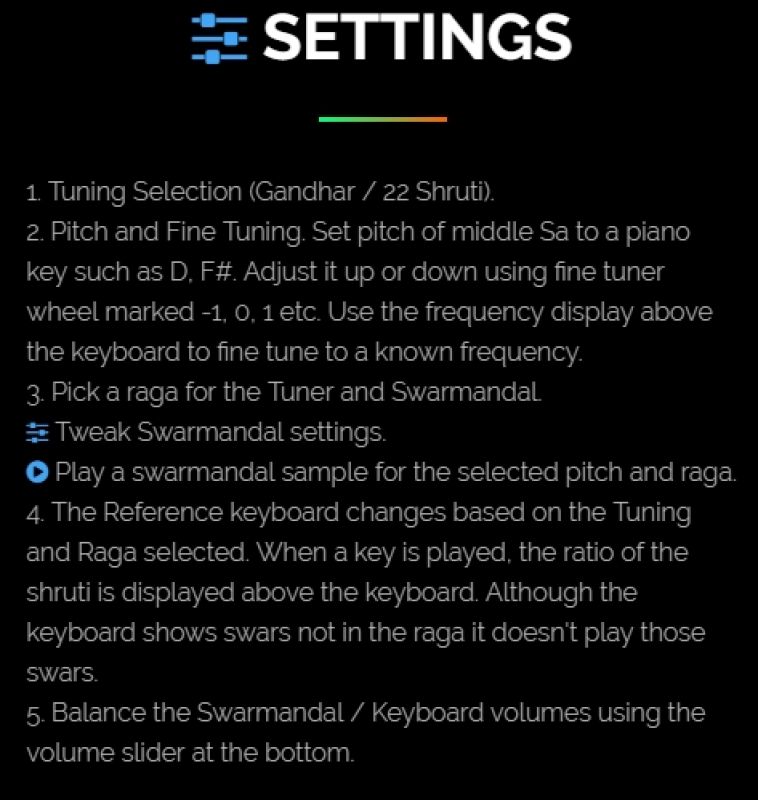 With the help of multidisciplinary techniques from the fields of yoga, combinatorial aesthetics, neuroscience, learning theory and resilient software development, Sandeep built Naadyoga, a system of vocal practice. The system helped compress a 10-hour effort into just one hour, which helps students gain more out of their one-hour practice, in an attempt to solve the issue of declining note accuracy. ‘Naad’ and ‘Sadhana’ respectively mean ‘Sound’ and ‘dedicated practice’ in Sanskrit, and hence the app was christened NaadSadhana. 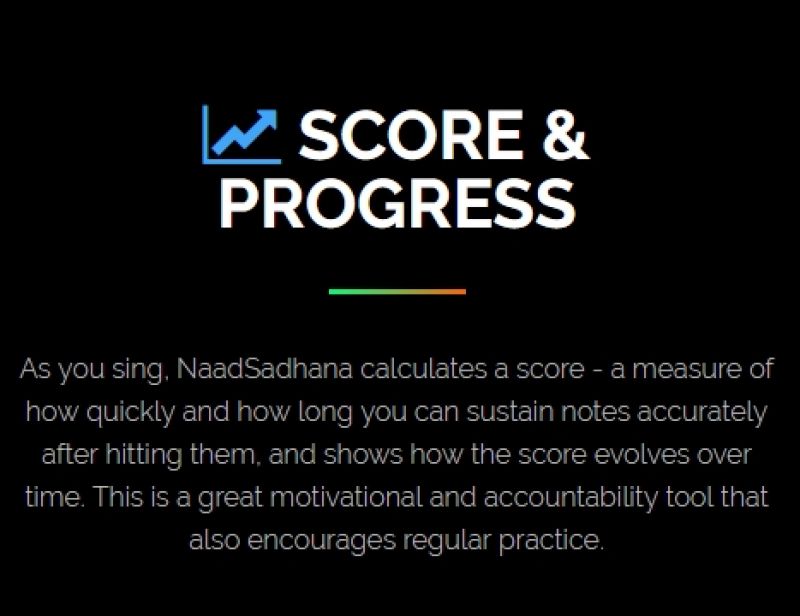 The app went to various phases to be perfected.  Parts in the initial app included ‘vocal analysis’, which turns out to be much more difficult than simple guitar/string instrument analysis. The first challenge was to create an accurate, yet energy efficient algorithm to analyse vocal frequencies. Additionally, the voice, unlike instruments has a certain wobbliness or vibration when sustaining a note. This, Sandeep says, lead down the rabbit hole of psychoacoustics to try and formulate an equation of ‘just noticeable difference’ in two frequencies for the average human ear and craft 3 different levels of mastery (beginner, advanced, expert). 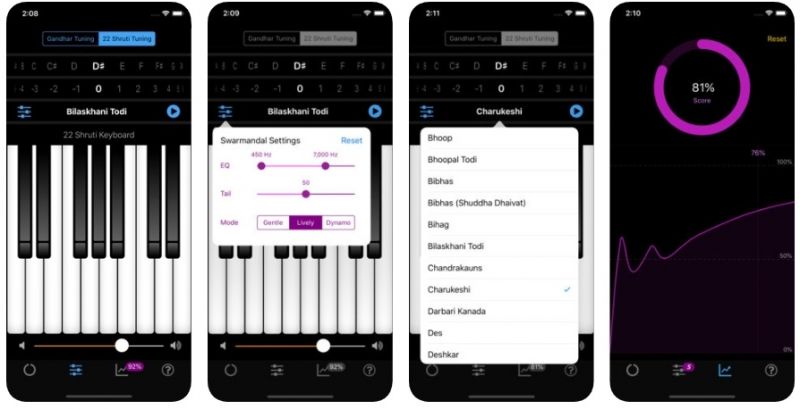 The other element was ‘Biofeedback UI’, the next UI/Neurological challenge. This layer creates a visual biofeedback interface that provides real-time feedback with maximum information content without overwhelming the senses, yet also taps into the brain’s dopamine subsystem to reward perfect notes. The UI uses the familiar ‘gauge’ pattern to show flat notes by a blue, left moving indicator, sharp notes by a yellow-orange right-moving indicator and perfect notes by a fat green, full circle gauge. The fat green circle rewards perfect notes with a small burst of dopamine, helping the brain converge to higher proficiency levels rather quickly.

Next comes ‘Score and history,’ which helps quantify progress and creates a scoring function that measures how quickly, how accurately and how stably one can sing or play notes. A second score gauge and history of how the score moves increase accountability and motivation to practice regularly — a critical habit for endless evolution and achieving mastery.

And then lastly, ‘Music detection.’ There is a great deal of interference that can occur from background noise, tanpura sounds, people speaking, wind, car horns and even falling utensils. To improve the accuracy and reduce false readings of the tuner, some form of noise reduction was needed. Sandeep said that he went one step further and decided to use machine learning and clever use of DSP to detect music and ignore everything else.

To put things in very short, simply run the app, play the Swarmandal, and sing/practice. The app on the iPhone/iPad will eagerly listen to your voice and graphically alert you if you are going astray from your notes. Additionally, the app will also help you with the AI-based Swarmandal in the background for you to practice or perform. The Swarmandal is not a simple metronome-based instrument that will play a pre-recorded tune but is an intelligent virtual musician on the string that will react and give you music according to your raaga. The app uses algorithms for vocal frequency analysis, neurology for biofeedback, motivational theory, psychoacoustics, DSP and machine learning to become one with the singer.

Here’s a sample video of what the app can currently do.

When Sandeep gave us a demo of his app, he sang “Albela Sajan Aayo Re” and our eyes were fixated on the phone’s display as to what it does and how it works. All he did was pop up the app, flick a few buttons and rest it on the table. Within a few seconds, he was singing away with the app supporting his each and every note with the Swarmandal playing automatically. The perfectly-tuned smart Swarmandal was performing a 22-Shruti tuned raga soundscape. 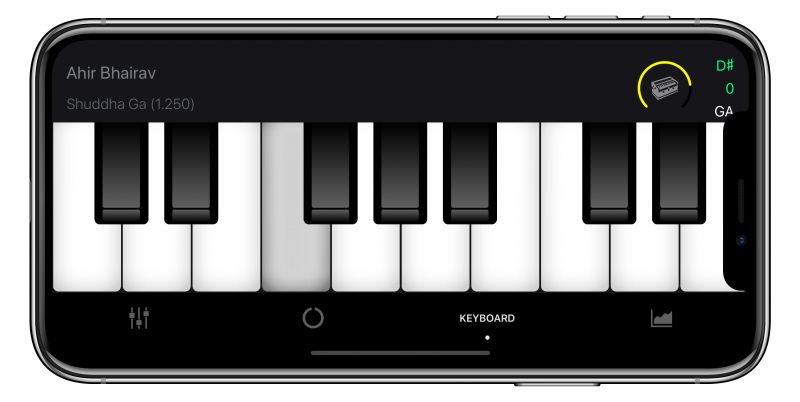 Sandeep says the iPhone’s hardware is very powerful and hence the app can only be built on the iOS platform for now as he is facing multiple issues with Android because of OS issues and limitations. Sandeep suggests that because the iPhone’s speaker does not have enough bass, an external Bluetooth or wired larger speaker is what he would recommend. In addition, Sandeep also stressed that Apple’s App Accelerator platform helped him big time to find tune his app as well guide him through the development process of the app. 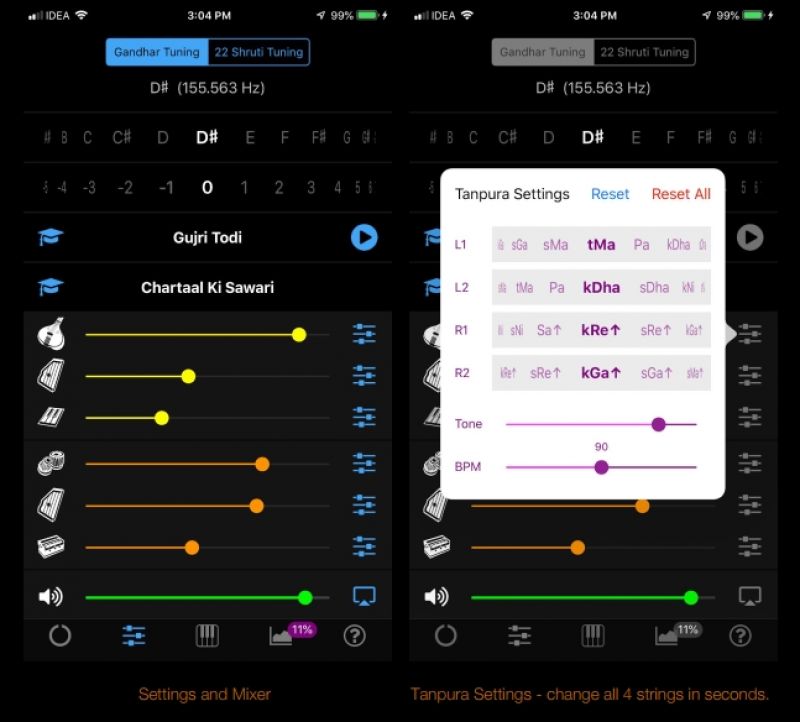 The NaadSadhana provides visual guidance almost 10 times each second. It discourages the singer from singing non-raga notes. “As a teacher, you can focus on higher aspects of music like ragadari, creativity, bandish, and presentation, rather than on note accuracy. As you sing or play, NaadSadhana calculates a score - a measure of how quickly and how long you can sustain notes accurately after hitting them, and shows how the score evolves over time. This is a great motivational and accountability tool that also encourages regular practice.” said Sandeep. 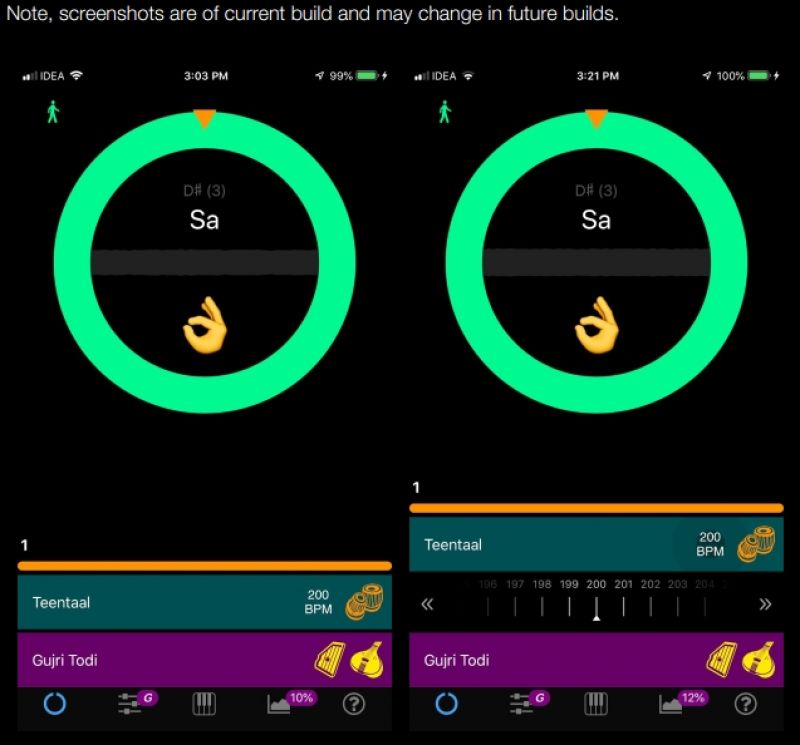 To take things further, Sandeep has now worked on a new update, which will release shortly. The new version will now feature a smart Tabla, and the next versions ahead will feature a few more instruments ahead such as the Manjira, Tanpura and more. 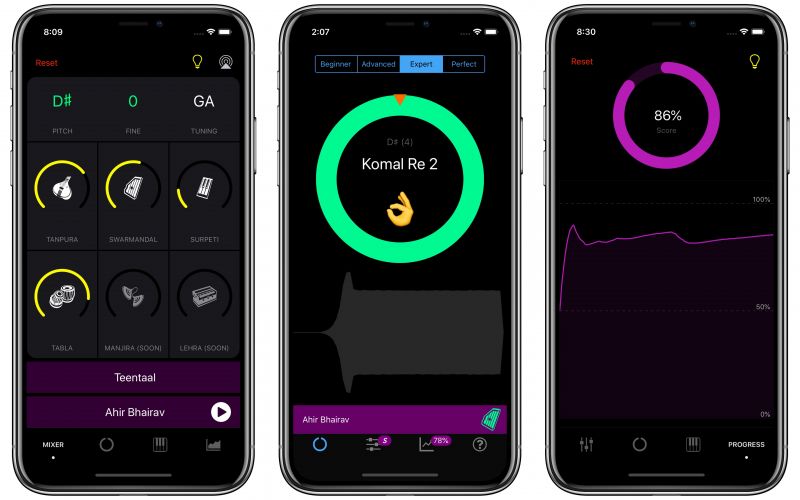 The Tabla version demo was also shown off and we were amazed. Sandeep said it took him immense time and his Tabla-playing friend to help him create and record the Tabla tones. In fact, when we were hearing him sing ‘Albela,’ we actually shut our eyes for some time and felt that he was actually performing with a few musicians sitting next to him. Check out the demo below of the next version of NaadSadhana which features the Tabla and Tanpura too.

The app is presently available on the App Store for Rs 2,699, but Sandeep has other plans for its pricing. He is presently thinking of a subscription-based model which will be cheaper and also feature a trial version for newcomers. However, he hasn’t confirmed the dates for the same as yet, but has definitely said “soon”. 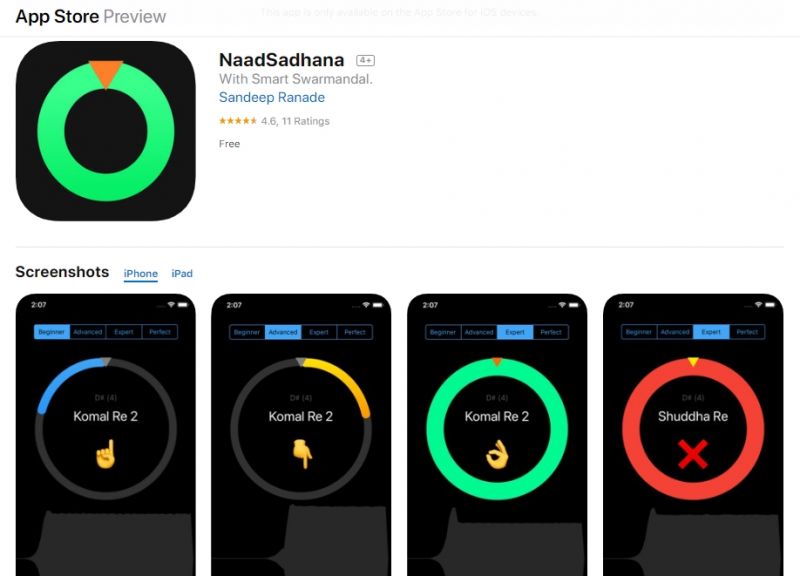 However, Sandeep has now made the app free for download and use for a limited period of time so people can use it to experience the power of his virtual instruments at work. The app, 'NaadSadhana by Sandeep Ranade' is presently available for free on the App Store and will soon be updated to the next version within a few weeks. The new version will be featuring the Tabla and a few other instruments. Download the NaadSadhana app today.