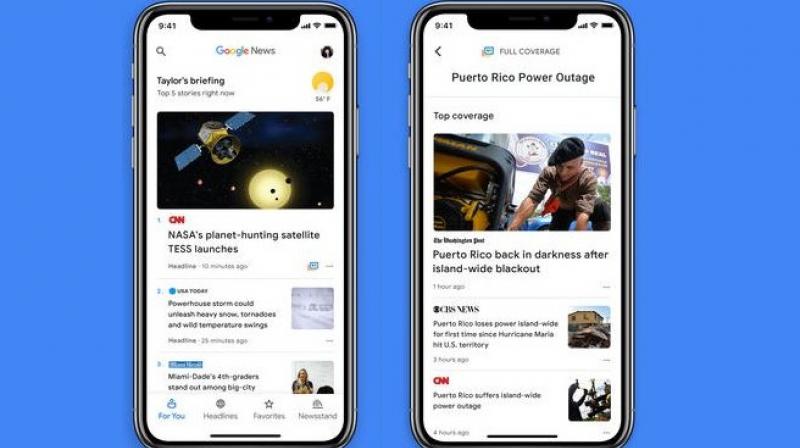 Google at the I/O event has specified that with this Google News app, a user can find quality content from a diverse set of credible publishers and can discover new genuine sources.

Last week at Google I/O, the Mountain View-based giant has introduced the new revamped artificial intelligence-powered Google News. Along with the redesign, the updated Google News app now gives users news based on Google's AI and machine learning algorithms. The company has already launched this Google News app for Android, but, now the update has officially rolled out to iOS platform replacing the old Google Play Newsstand app. Users can get the new Google News app on the Apple's App Store here.

The new Google News on iOS is technically same as the users get on their Android platforms. The news showcased on this new app focuses on using machine learning algorithms, which gathers all the news around the world and puts them in a chronological order in stories and timelines format. Google says these new algorithms also help to bring breaking news through a complex combination of all the relevant stories and arrange them in an easy-to-understand format.

Apart from the redesign, the Google News app is now categorised into four new sections. As for the first section, it is a 'For You' section, where one can find top five stories that are trending at the moment based on the location of the user. Along with the five stories, the app also features algorithmically chosen articles and local news stories.

Heading over to the next section, there's a 'Headlines' section, where it has sections categorised like latest, India, World, Business, Entertainment and sports, which is very much identical to the older Google News app. However, all the top articles in any particular section are streamlined in a stories (which Google calls it Full coverage) and autoplay videos format similar to the feed you notice on Instagram or Twitter.

Further, the app showcases 'Favourites' section, where a user can select prefered news sources, topics which the user is interested in, location-based news, can save news searches and stories (which can be read later).

Lastly, there's Newsstand, this is a section where a user can subscribe to other media publications on a monthly or yearly based subscription. After subscribing, opening the individual media publications opens up the respective media house' specific category system. Keep in mind that the publications found on the Newsstand support Google AMP standard, which technically means the pages will load way quicker without bouncing like in a normal browser.

Google at the I/O event has specified that with this Google News app, a user can find quality content from a diverse set of credible publishers and can discover new genuine sources.