Apple to host WWDC 2020 in June, will release iOS 14 and more at online-only event

Upgrades of the iPadOS, macOS, watchOS and tvOS are also expected at the developers’ conference 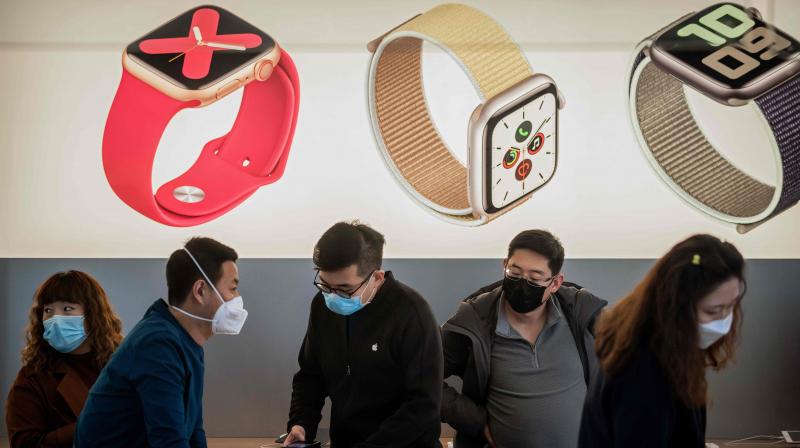 In this picture taken on March 11, 2020 an Apple staff (C) and customers wearing face masks as a preventive measure against the COVID-19 coronavirus are seen inside of an Apple shop in Beijing. (Photo | AFP)

Chennai: Waiting for the preview of iOS 14, watchOS 7, macOS 10.16, tvOS 14? Apple has announced that its annual Worldwide Developers Conference (WWDC) will be held in June. As the coronavirus spreads rapidly in the US, the event will be only online-streamed and will not host its usual 5000-strong tech crowd in person.

The WWDC is an annual conference that Apple has held for the past 30 years. Typically at the WWDC, Apple launches products, operating systems and apps, and enabled app developers to work with Cupertino engineers to add to the Apple ecosystem.

WWDC 2020 will provide Apple’s global developer community of more than 23 million registered developers in 155 countries and regions with insights and tools needed to produce technologies and frameworks that will shape the future across all Apple platforms, Apple said on its website’s newsroom.

A peek into what can be expected:  As we have already reported, Apple is building a new fitness app which will sync with the Apple Watch and give you a guided workout or guidance on other physical activity as well as track blood oxygen levels in your body. Apart from that, watchOS 7 will likely get sleep tracking too.

Other developments are the ‘PencilKit’ API for handwriting recognition in text input fields, iMessage features such as @-tagging and unsending messages, which third-party apps such as WhatsApp have had for years now.

Apple is also looking to provide improved mouse cursor support, and could allow users to set third-party web browsers and email clients as the defaults.

The full online schedule of the keynote and the sessions of WWDC 2020 will soon be released Apple’s developer website and the Apple Developer App.

The exact dates of WWDC 2020 will be announced sometime soon on the Apple Developer app and the Apple developer website.