Technology   In Other news  15 Jun 2020  Get Google, Facebook to crackdown on fake news, but keep press freedom intact, media tells EU
Technology, In Other news

Among measures urged is a “meaningful” sanctions regime so co-signatories of the 'Code of Good Practice' have an incentive to act. 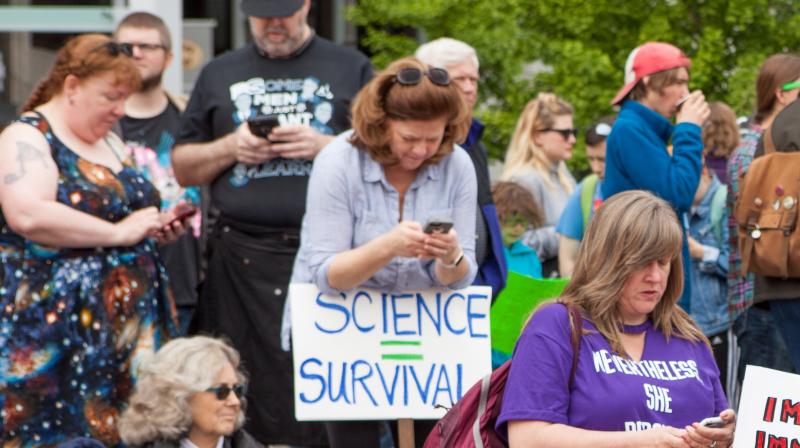 The European Federation of Journalists, the European Publishers Council and the Association of Commercial Television in Europe (ACT) say they are “alarmed by the rise in online disinformation during the pandemic”, which has had “a devastating impact on public health efforts”. (Photo | Wikimedia Commons - Pax Ahimsa Gethen)

Brussels: Broadcasters, publishers and journalists called on the European Commission on Monday to implement “much stronger measures” to combat disinformation on internet platforms such as Google and Facebook.

A joint declaration, signed notably by the European Federation of Journalists, the European Publishers Council and the Association of Commercial Television in Europe (ACT), follows a presentation on Wednesday by Brussels of new measures against disinformation, prompted by the COVID-19 pandemic.

The signatories say they are “alarmed by the rise in online disinformation during the pandemic”, which has had “a devastating impact on public health efforts”.

They say the European “code of good practice”, signed in 2018 by internet platforms, “has shown to be inadequate to address the source and drivers of disinformation propagated online”.

“There is an urgent need for effective instruments to better assess and successfully tackle the issue,” they write, saying that Europe is over-reliant on the “good will of systemic actors”.

Among the measures urged is a “meaningful” sanctions regime to ensure that the co-signatories of the code of practice have an incentive to act.

These measures should be applied in a way that “boosts rather than penalises media” and should ensure that “journalistic freedom, fundamental rights and editorial freedom are guaranteed”.

Finally, they ask that the dialogue with the online platforms be carried out in a more “structured” way, while “a certain number of commissioners” deal directly with platforms.

The EU last week called on the internet giants to do more to fight the “huge wave of disinformation” caused by the pandemic, by publishing a monthly report on the actions implemented.

The vice president of the EU commission in charge of values and transparency, Vera Jourova, said the reports would have to relate to the nature of the disinformation, the dimension of the network involved, its geopolitical origin and the target audience.

The approach is based on the good will of platforms, but she said it was in their interest to gain the “confidence” of their users.

The pandemic has already led the EU to ask platforms to put forward information from health authorities like the WHO, and to withdraw advertisements for fake medicines in particular.