Technology   In Other news  15 Apr 2017  WhatsApp is testing 'Unsend' message feature and new shortcuts
Technology, In Other news

WhatsApp is testing the 'unsend' feature in a new beta release of WhatsApp Web version 0.2.4077

WhatsApp is testing two new features in its messaging app that is going to turn sending messages more handy than before.

The messaging app has long been rumoured to be rolling out a new ‘unsend’ feature that would allow users to revoke and edit already sent messages.

According to @WABetaInfo, the firm is testing the feature in a new beta release of WhatsApp Web version 0.2.4077, which will allow users to ‘unsend’ sent messages within a five-minute time frame. 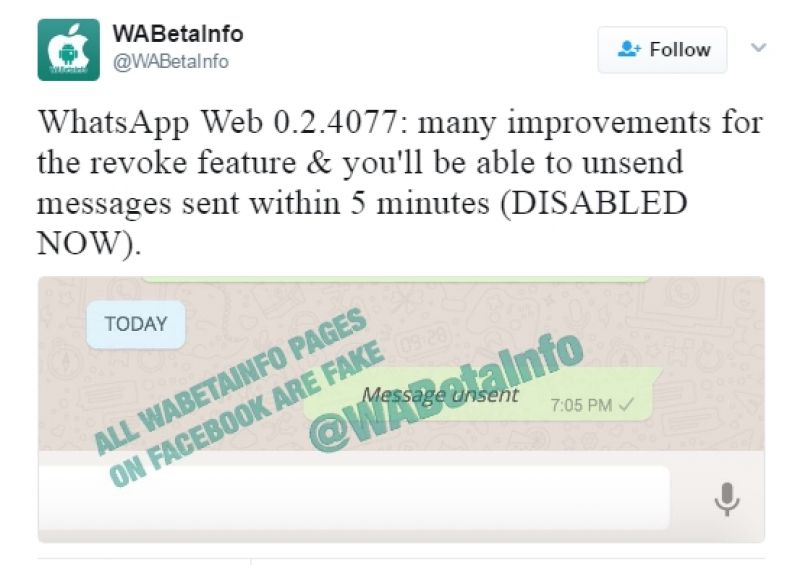 Apart from that, In the beta version, the app displays a full range of formatting options: Bold, italic, strikethrough, when an excerpt of text is selected.

Currently, all the three formatting of a text can only be obtained through selective commands.  To make bold, user needs to put text in between two asterisks (*), like *this*. To italicise underscore is used, like _this_ and to strikethrough a message, tildes are used, like ~this~.

Since both the features are currently under test, they are expected to feature in the app anytime soon with the future updates.