The electric EHang 184 can travel at 100km per hour at 300m above the ground, the Dubai transport authority says. 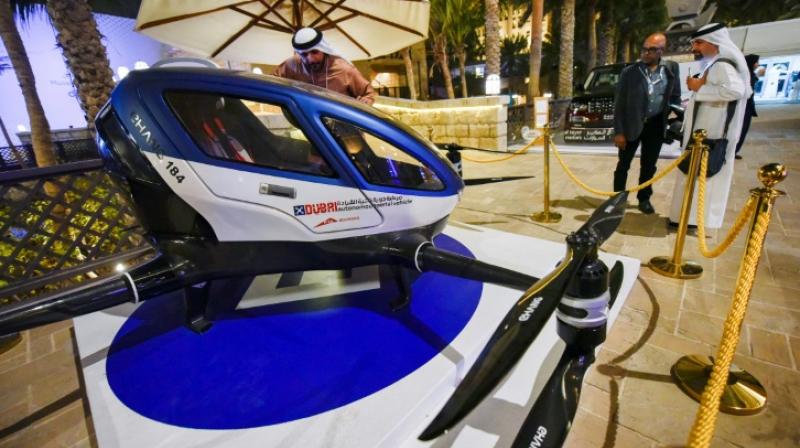 Dubai has tested a Chinese prototype of a self-driving hover-taxi, its transport authority said on Monday, with the aim of introducing the aerial vehicle in the emirate by July.

The test of the one-man electric vehicle comes as the city state in the United Arab Emirates seeks to ensure a quarter of its means of transport are self-driving by 2030.

A passenger simply needs to select a destination for the autonomous taxi to take off, fly the route and touch down in the chosen spot monitored by a ground control centre, it said.

The vehicle, made by Chinese drone manufacturer EHang, can recharge in two hours and make trips of up to 30 minutes.

"The autonomous aerial vehicle exhibited at the World Government Summit is not just a model," authority head Mattar al-Tayer said on Monday.

"We have already experimented (with) the vehicle in a flight in (the) Dubai sky," he said in English.

The authority was "making every effort to start the operation of the autonomous aerial vehicle in July 2017" to help reduce traffic congestion, Tayer said.

The quadcopter is powered by eight propellers, the authority said.

It has highly accurate sensors and can resist extreme temperatures, it said. The emirate is known for its scorching summers.

In November, Dubai agreed a deal with US startup Hyperloop One to study the construction of a near-supersonic transport link to the Emirati capital Abu Dhabi.

Home to Burj Khalifa, the world's tallest tower, Dubai is a leading tourist destination in the Gulf, attracting a record 14.9 million visitors in 2016.