The Illinois Holocaust Museum and Education Center has featured the survivors’ images in a special theatre. 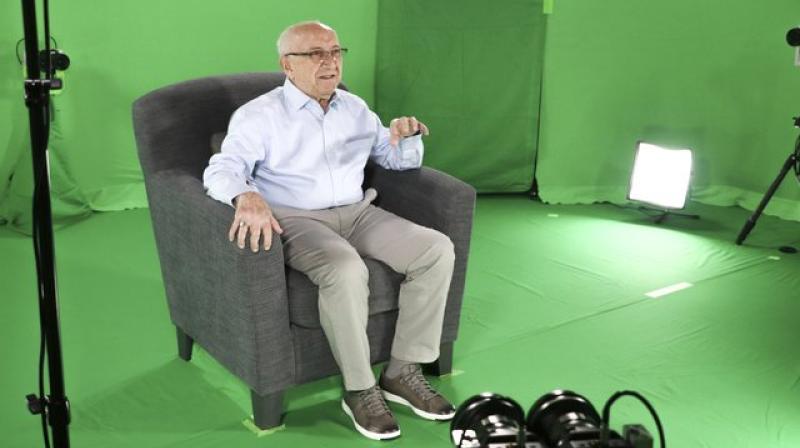 The recollections of the Dallas resident who as a Jew in Poland survived the Warsaw Ghetto and Nazi concentration camps are now being preserved in a way that will allow generations to come to ask his image questions.

Max Glauben was 17 and had already lost his mother, father and brother at the hands of the Nazis when US troops rescued him while he was on a death march from one German concentration camp to another.

The recollections of the Dallas resident who as a Jew in Poland survived the Warsaw Ghetto and Nazi concentration camps are now being preserved in a way that will allow generations to come to ask his image questions. Glauben, who turns 91 on Monday, is the latest Holocaust survivor recorded in such a way by the University of Southern California Shoah Foundation. The Los Angeles-based foundation has recorded 18 interactive testimonies with Holocaust survivors over the last several years, and executive director Stephen Smith says they’re in a “race against time” as they work to add more, seeking both diversity in experiences and testimonies in a variety of languages.

“I thought that my knowledge could cure the hatred and the bigotry and the killings in this world if somebody can listen to my story, my testimony, and be educated even after I’m gone,” Glauben said.

Smith says that while the foundation founded in 1994 by film director Steven Spielberg has about 55,000 audiovisual testimonies about genocides in dozens of languages — the majority from the Holocaust — the interactive technology stands out for allowing museumgoers to have a dialogue with survivors.

“It’s your questions that are being answered,” Smith said, adding that the replies, especially on weighty issues like forgiveness can be especially poignant. He says, “You actually see sometimes them struggling to know what to answer.”

So far, the foundation has Holocaust survivors speaking in English, Hebrew and Spanish, and the group hopes to get people speaking in even more languages.

“It’s so powerful when it’s in your mother tongue and you’re looking the person in the eye and you are hearing nuanced language coming back that’s your own language,” Smith said.

For more than a year now, the Illinois Holocaust Museum and Education Center has featured the survivors’ images in a special theatre. Museum CEO Susan Abrams says that when visitors interact with the images , the impact is often obvious: “People get teary; people laugh.”

“Our audience comes to feel that they know these survivors somewhat intimately because they’re having small group conversation, and in that moment, pretty much everything else fades away,” Abrams said.

The Illinois museum is one of four currently featuring the images. Other museums are in Houston , Indiana and New York . The Holocaust museum in Dallas will start showing them starting in September, after it opens in a new location and with a new name — the Dallas Holocaust and Human Rights Museum.

The Dallas museum currently brings in survivors to talk to students and has found that’s often the most meaningful part of their visit, according to President and CEO Mary Pat Higgins. This technology ensures that can continue, she said.

“Our survivors are aging, and so in 20 years we won’t have any survivors who are still able to do that themselves,” she said.

Smith said the images can appear on a flat screen or be projected in a way that appears to be three-dimensional. Like Illinois, Dallas is building a special theater so the image will appear three-dimensional on a stage.

Smith said the technology involved is simpler than many people think.

“It’s actually video that responds to human voice commands,” he said. “And all that’s happening is rather than you watching a linear testimony, all the bits of the testimony are broken up, and then when you ask it a question it finds that piece of video and plays it for you.”

JT Buzanga, assistant curator at the Holocaust Museum Houston, said the uniqueness of the interactive testimonies gives visitors a reason to return.

“It’s something that makes the connection that people want to remember and want to come back,” Buzanga said.

Glauben, who has made it his mission to tell people about the Holocaust, helped found the Dallas museum. He says that after he lost his family, he told himself he would “do anything possible to educate the people and let them know what kind of tragedy this was.”