The game is charming, bloody and a lot of fun to play. 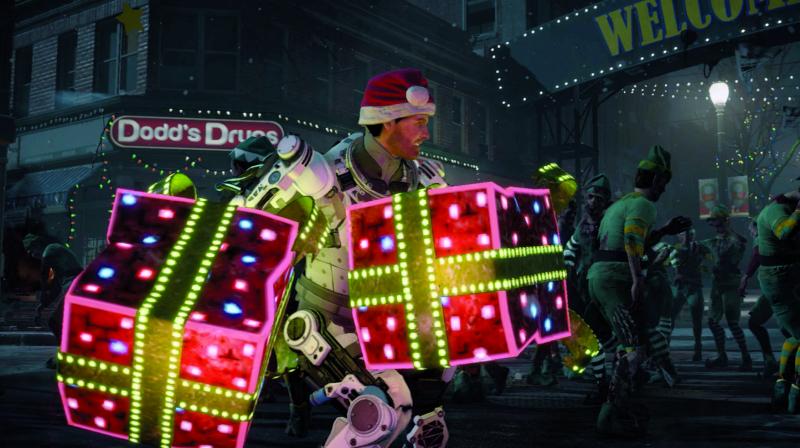 Dead Rising allows you to combine different weapons or parts to create a truly unique arsenal.

Dead Rising 4 is an open-world action game primarily focused on utilising various ways of killing hordes of zombies. Released last year on Xbox One and PC, it is now being released for the PlayStation 4 as Dead Rising 4: Frank’s Big Package.

The story mode begins with protagonist Frank West getting tricked into investigating a military compound, which happens to be a test site for research and experimentation on zombies. After being seemingly betrayed by the government, Frank goes back to Willamette in order to find conclusive evidence and clear his name.

You can use a wide variety of guns, melee weapons and projectiles to take out a massive number of enemies. After successive hits, players can unleash special moves that work similar to executions that are also unique to the weapon you’re holding.

For an over the shoulder shooter, the shooting mechanics are barely passable as the aiming feels off and the auto aim is unreliable. Guns sway way too much and you will have a hard time getting used to the responsiveness and the controls. Nevertheless, melee feels extremely satisfying and I spent most of my time only using special weapons as they did not require any sort of precision.

Dead Rising allows you to combine different weapons or parts to create a truly unique arsenal.  As an example, you can attach a grenade to your golf club that will make enemies explode upon contact. These combinations are hidden as blueprints all over town, but crafting is straightforward once they have been unlocked.

The battle system is flexible and encourages experimentation. You can beat up zombies into a bloody mess and the special executions are a delight. It only works because the game does not take itself too seriously without being overly crass or comical. Frank can take out his camera to take pictures of key events, which also comes handy during the game's simple investigation sequences.

For a game that relies so much on crafting and carrying the right items, I found inventory management to be a big hassle. You can only equip a certain number of guns, melee and throwable weapons, but you will constantly run into duplicates. Using the different directional buttons to pull up radial menus, swapping equipment and how the game handles inventory are all unintuitive.

Since this edition came out a year after the original launch, Frank’s Big Package also includes all of the game’s DLC. In Frank Rising you control a zombie, gaining all new abilities and a hunger for humans. Capcom Heroes lets you dress Frank as various Capcom characters such as Ryu and Dante, and changes your move-set to match that character while Mini-golf offers a fun distraction.

Dead Rising 4 is charming, bloody and a lot of fun to play, provided you’re not looking for a third person shooter. The over the top weapons and sense of humour kept me engaged throughout, but the uneven shooting mechanics and inventory management will constantly come in the way of your enjoyment.