A crowd of more than 40,000 people packed into the city’s Olympic Bird’s Nest stadium to watch the South Korean gaming stars Faker and CuVee. 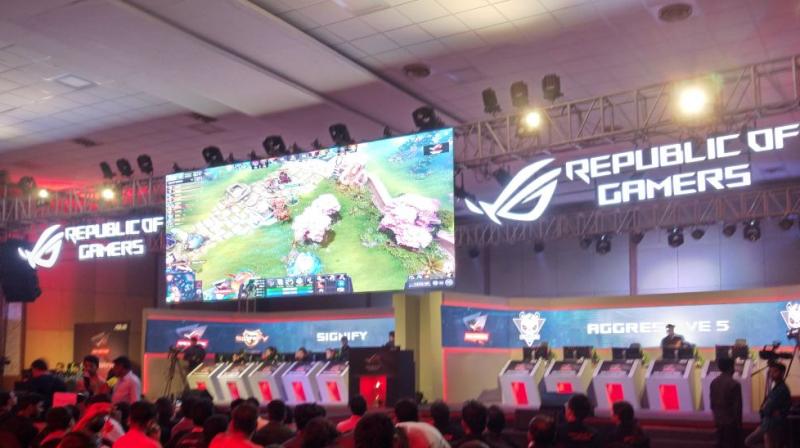 China’s craze for e-sports is being propelled by the country’s booming video game market.

In an industrial park on the edge of Shanghai, a dozen Chinese teenagers are taking a break from battling digital armies to focus on their yoga. They are members of EDG, one of China’s top electronic sports teams, who spend six days a week in a military-style training compound to become world beaters in video games.

EDG’s players - when not doing yoga to stay limber - spend most of their time at the camp wielding virtual weaponry playing multi-player battle games like “League of Legends” or Tencent Holdings Ltd’s popular “Honour of Kings.” The team’s top players can rake in up to 30 million yuan ($4.54 million) a year each from tournament prize money, commercial endorsements and payments from avid fans who spend hours watching them play online.

China’s craze for e-sports is being propelled by the country’s booming video game market, the world’s largest and one that is expected to register $27.5 billion in sales this year, according to the gaming consultancy Newzoo.

Game developers like Tencent and NetEase Inc, and others like Alibaba Group Holding Ltd, are competing to market video games, fill stadiums with fans and sell broadcast rights to the matches.

“We have found the fastest-growing and biggest demand is in e-sports, and we are following that trend,” said Wang Guan, general manager of e-sports at Alisports, an Alibaba subsidiary.

Cities around the country are looking to cash in on the market’s fast growth with video game theme-parks and e-sports venues. Some universities are even rolling out gaming degrees.

Alisports, which organizes the World Electronic Sports Games, successfully lobbied the Olympic Council of Asia to include e-sports at the 2022 Asian Games in Hangzhou.

The extent of the e-gaming boom was on display in Beijing in November at the world final of League of Legends, with a prize of over $4 million at stake. A crowd of more than 40,000 people packed into the city’s Olympic Bird’s Nest stadium to watch the South Korean gaming stars Faker and CuVee go head to head. The raucous crowd, a bigger turnout than most local soccer games, underlined how popular gaming as a hobby and spectator sport has become in China.

Jiang Ping, 17, a university student in Beijing, paid 4,000 yuan to watch the final with his aunt. They were lucky: tickets sold on the gray market reportedly rose to more than 20 times the original price due to high demand.

“When I started playing this game five years ago, there weren’t that many people,” Jiang said. “Now the numbers are huge, and even the game itself is now owned by a Chinese firm, Tencent.” Tencent owns the League of Legends developer Riot Games.

The city of Wuhu, a backwater three hours away from Shanghai, is a symbol of China’s gaming potential - as well as its risks.

Many local governments have been seeking to develop more specialized industries, and Wuhu has targeted e-sports. In May, the city signed a deal with Tencent to build an e-sports university and a stadium for events. Other cities, like Zhongxian in the municipality of Chongqing, are also building facilities to profit from the e-sports boom. Some industry participants, however, are already worried about a bubble forming, and rising debt levels as local governments jump into e-sports investment.

“Maybe some of the developers don’t have pure intentions, they are just using e-sports as an excuse to get land at a cheap price from local government,” said Tao Junyin, marketing director of VSPN, a leading e-sports content company.

Han Li, the manager of Wuhu’s e-sports association, said the city had discussed ideas including an e-sports-themed hotpot restaurant, bar and cinema, in addition to the gaming school and arena. Ultimately, though, China’s gaming giants are the ones calling the shots, he said.

“Tencent has a controlling power in the whole industry, so we have to find a way to work with Tencent. You either die or you go Tencent,” he said. Tencent declined to comment.

This year, Tencent limited the time children could play its popular Honour of Kings game after coming under fire over gaming addiction. In November it said it would bring the top-selling game “Playerunknown’s Battleground” to China but would tweak the game to fit with “socialist core values.” Tencent’s main local rival, NetEase, has already embedded banners with patriotic slogans into one of its popular battlefield games to head off official criticism.

“In China, you have to follow the government’s decree,” said Tao of VSPN. “But you can always make moderations to the games so that it will pass the censor.”

Nonetheless, China’s youth seem enthralled, prompting some universities to start offering e-sports degrees, from professional gaming to e-sports commentating and graphic design. Liu Xuefeng, a freshman from Anhui province, applied for a gaming degree program in the western city of Chengdu - despite facing push-back from his concerned parents.

“I am very interested in this program, and they couldn’t stop me, so they had to cave in the end,” he said, adding that he wanted to be an e-sports commentator. “There is great potential in the development of the gaming business.”

The allure of becoming the next big gaming star is already sparking fierce competition to get into the market, said David Ng, head of Super Generation Investment, which owns the EDG e-sports team.

“Sometimes we will have a thousand application letters in our mailbox to join our team on a single day.”