Technology   In Other news  12 Mar 2020  Tech that could be useful in Indian agriculture: Supercomputer helps track locust attacks in East Africa
Technology, In Other news

Tech that could be useful in Indian agriculture: Supercomputer helps track locust attacks in East Africa

The computer, a donation from Britain, uses satellite data to track locust swarms and predict their next destination 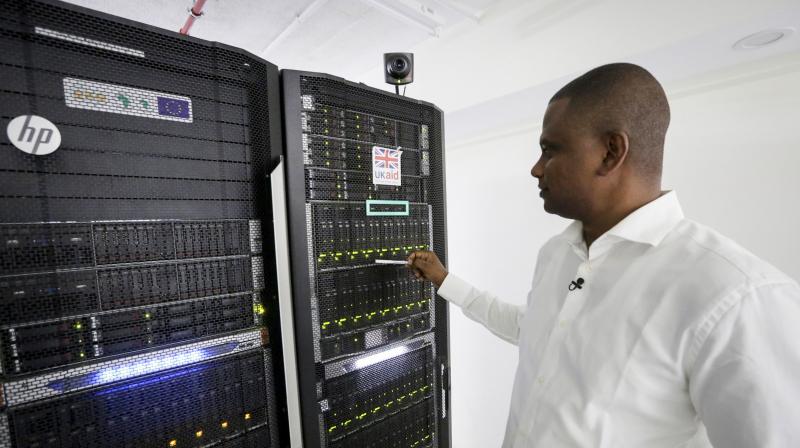 In this photo taken on Thursday, March 5, 2020, Abubakr Salih Babiker, a climate scientist at the Intergovernmental Authority on Development's Climate Prediction and Applications Center, shows server racks containing a supercomputer in Nairobi, Kenya. A supercomputer is boosting efforts in East Africa to control a locust outbreak that raises what the U.N. food agency calls "an unprecedented threat" to the region's food security. (Photo | AP)

Kampala, Uganda: A supercomputer is boosting efforts in East Africa to control a locust outbreak that raises what the U.N. food agency calls "an unprecedented threat" to the region's food security.

Such technology could be of enormous use in India too where farmers struggle with pest control.

The computer, a donation from Britain, uses satellite data to track locust swarms and predict their next destination. Quickly sharing the information of the locusts' movements with regional authorities is key to controlling the outbreak, as even a small swarm of locusts in a single day can move nearly 100 miles and consume the amount of crops that would otherwise feed 35,000 people.

Based in a regional climate centre in Kenya, where the insects have been particularly destructive, the supercomputer system ``produces extensive weather forecasts to predict the high winds, rainfall, and humidity that provide ideal breeding conditions for locusts so climate experts can predict their next destination,'' the U.K.'s Department for International Development said in a statement.

``By improving early warning systems we are helping charities and African governments to take rapid action to protect vulnerable communities.''

Kenya, Somalia and Uganda have been battling the worst locust outbreak that parts of East Africa have seen in 70 years. Swarms have also been sighted in Djibouti, Eritrea, Tanzania, Congo and South Sudan, a country where roughly half the population already faces hunger after years of civil war.

The threat from the locusts ``remains extremely alarming" in the Horn of Africa, where ``widespread breeding is in progress and new swarms are starting to form, representing an unprecedented threat to food security and livelihoods at the beginning of the upcoming cropping season,'' according to a warning issued this month by the U.N. Food and Agriculture Organization.

Locust swarms, sometimes as large as some cities, can destroy crops and devastate pasture for animals. Aerial spraying is generally considered the only effective control method. In Uganda, where the locust infestation has recently spread to more than 20 districts in the country's north and northeast, soldiers have been battling swarms using hand-held spray pumps because of difficulties in getting aircraft as well as the recommended pesticide.

Officials in Kenya's capital, Nairobi, where the supercomputer is based, said the technology will boost their efforts in tracking locust swarms.

``The forecast is quite useful because it helps them to focus their efforts in the areas that are most likely to be affected by the desert locust in the coming say, 10 days,'' said Abubakr Salih Babiker, a climate scientist at Nairobi's regional climate center. ``In this way they are more efficient in allocating their resources, allocating the financial capacity to control the desert locust. It is a very innovative and new way of using technology to solve a real-life problem like the desert locust.''