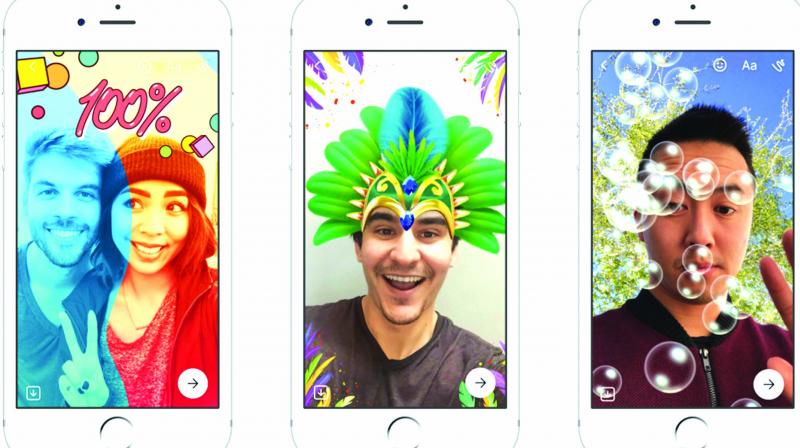 The photos and videos of Messenger Day will stay on for 24 hours before disappearing.

Facebook users can now let the world know what’s on their mind and what they are up to more effectively. Its chat app update Messenger Day that just got launched globally makes the conversations appear far better than ever before with a colourful makeover to the chat box. FB has adopted another Snapchat feature, in Engadget’s words “not just once, twice, or thrice, but four times now.”

What is so special about this Messenger Day? To start with, make sure you have an updated Messenger app. Turn on the ‘add your day’ rectangle with the camera button above the chat threads on the home screen. Take a photo or selfie, apply art and effects from the smiley face icon seen on the top right corner. Pick from about 5000 frames, effects, and stickers as you wish. Keen on adding text? Put that too. The photos and videos of Messenger Day will stay on for 24 hours before disappearing.

The test run had already been done in Poland. It was then dubbed as a “latest salvo between Facebook and Snapchat” since the former bought Instagram for $1 billion in 2012 and the later rejecting its $3 billion buyout offer later.

There’s more to the ephemeral messaging set up. As tech portal Venturebeat puts it: “As Facebook builds out its Messenger platform, it’s feasible that the company will put more resources into facilitating conversations between brands and people. Much as you see stories from brands you follow on Snapchat, it might at some point become possible to see branded stories through Messenger Day.”

Techcrunch, at the same time, quotes David Marcus, (Facebook’s VP of messaging) hinting that it will “probably insert advertisements between posts to become one of Messenger’s first revenue streams.”

Though it makes your social media presence felt, never put your personal info at stake. It’s up to you to choose who you want to share your moments with. Select if you want to make everyone see it, or just closest friends and family or “everyone except” the select set of persons.

Don’t get disappointed if you can’t access Messenger Day. As it is a worldwide launch, it may take time to reach users everywhere. It is available on Android and iOS platforms.

Tech This Week | With ARM in kitty, Nvidia most impressive firm you never heard of

Ahead of ban starting Sunday, US TikTok users switch to other platforms, fans follow