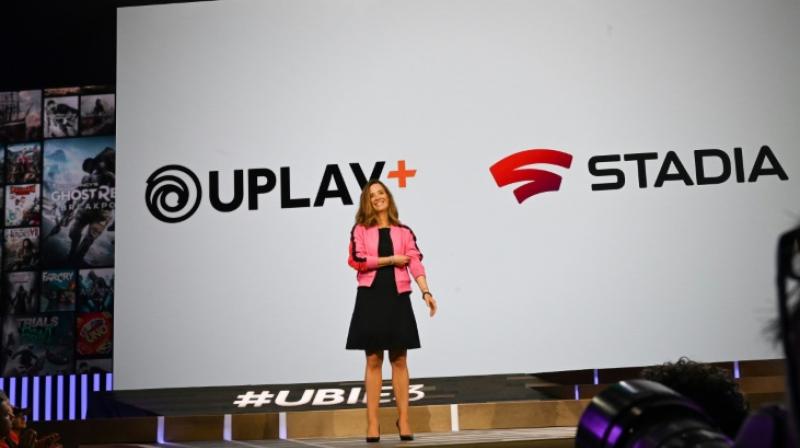 Games on the way included a new addition to the "Watch Dogs" franchise in which players take on the role of a cyber-savvy hero whose arsenal includes hacking people and systems in a technology-driven world. (Photo: AFP)

California: French video game titan Ubisoft on Monday unveiled a new subscription service and a Brexit-tinged title as it taps into the industry trend toward streaming games. A Uplay+ service launching on September 3 will let players access Ubisoft's library of games on Windows-powered personal computers, according to vice president of platform and product management Brenda Panagrossi.

"We're excited about this," Panagrossi said during a behind-the-scenes briefing at the Electronic Entertainment Expo video game industry gathering. "It provides tremendous value that we think will bring in new players."

Uplay+ subscriptions will cost $14.99 monthly when it launches in the US and much of Europe. Subscribers will be able to download whichever titles they wish from the Ubisoft library for play on personal computers.

Next year, Uplay+ will launch on Google's new streaming video game service Stadia, which will let titles hosted in the internet cloud be playable on a wide range of devices, according to Panagrossi. Ubisoft has a history of boldly embracing new styles of play and gaming devices, and was an early partner with Google while the California-based technology giant was developing Stadia.

"The video game industry is constantly shifting, and our players' needs are evolving," Panagrossi said. "With Uplay+ we are able to provide more freedom for players by making it even easier to access our extensive catalogue."

As the multi-billion dollar video game industry turns to streaming games the way Netflix does video or Apple Music does songs, a key will be fresh, captivating content to attract and keep subscribers, according to industry insiders.

Ubisoft on Monday showed off coming games during a colourful, high-energy show in the Orpheum Theater in downtown Los Angeles on the eve of the official opening of E3. Games on the way included a new addition to the "Watch Dogs" franchise in which players take on the role of a cyber-savvy hero whose arsenal includes hacking people and systems in a technology-driven world.

"Watch Dogs Legion" is set in a future London in crisis, with automation and artificial intelligence devastating the economy. Cryptocurrency has replaced the pound. Extremists and organised crime control the government in a city under constant surveillance and patrolled by drones. "We wanted to make a game relevant to the world we live in today, but with a goal of challenging the imagination," said Alexandre Parizeau, managing director at Ubisoft's studio in Toronto.

"Your mission is to build a resistance and fight back against the emergence of an authoritarian regime." In a technical accomplishment, any character in the game city of London can be recruited to the resistance and eventually played, opening up myriad options. Creative director Clint Hocking described the game world as a post-Brexit Britain at a turning point, and where citizens are called on to fight extremism.

"It's a story about freeing London and the world from tyranny," Hocking said. Watch Dog Legion was slated for launch in March of next year.

Ubisoft announced it is collaborating with Netflix on a film being made from its military action game "Tom Clancy's: The Division" which is to star actors Jessica Chastain and Jake Gyllenhaal.

Rob McElhenney, creator of comedy series "It's Always Sunny In Philadelphia" said during the presentation that he partnered with Ubisoft to make a comedy for a coming Apple TV+ service set in a game development study. "I love games; I wanted to express that love by making a TV show about them," McElhenney said while providing a glimpse of what he is working on.

The show, in which McElhenney plays an egotistical creative director, is called "Mythic Quest: Raven's Banquet." In another celebrity alliance, Ubisoft based a fearsome military foe in a coming "Ghost Recon: Breakpoint" game on actor Jon Bernthal, who is known for roles in "The Walking Dead" and "The Punisher."

His character in the game leads an elite fighting unit called the Wolves. "I've had a chance to play some pretty tough guys," said Bernthal, who came on stage with his dog. "If you think you have what it takes, strap on your boots and get ready to take on the Wolves, to take on me."