Zuckerberg has been the sole leader of Facebook for its entire 15 years of existence. 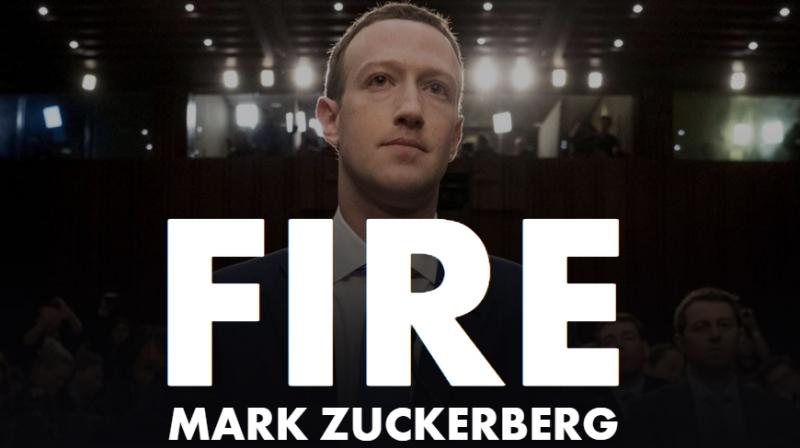 The petition called FireMarkZuckerberg on www.FireMarkZuckerberg.com has been launched by Fight for the Future which is s dedicated to protecting and expanding the Internet’s transformative power in people’s lives by creating civic campaigns that are engaging for millions of people.

A petition has taken off that has just one objective — forcing Facebook’s CEO and founder, Mark Zuckerberg off Facebook, asking him to resign. The main reason — the failure to keep the social media platform safe, private and secure.

The petition called FireMarkZuckerberg on http://www.FireMarkZuckerberg.com has been launched by Fight for the Future which is s dedicated to protecting and expanding the Internet’s transformative power in people’s lives by creating civic campaigns that are engaging for millions of people. The petition website states that Facebook, the world’s largest social networking platform, has violated users’ privacy many-a-times and Mark Zuckerberg, the CEO and founder of the platform should step down immediately.

While Zuckerberg has apologized over the goof-ups, the petition states that under his leadership, Facebook has violated billion’s of people’s basic rights apart from harvesting and abusing their personal data.

‘Zuckerberg has been the sole leader of Facebook for its entire 15 years of existence. In that time, there has been no attempt to move away from a business model reliant on violating user privacy. Facebook’s current business practices are fundamentally at odds with democracy and human rights,’ states the petition on FireMarkZuckerberg.com.

‘There is no single silver bullet solution that will “fix” Facebook. But we can start by sending a clear message to its shareholders, corporate leadership, and the entire tech industry that we are fed up, and that no one should be immune from facing the consequences of their actions. Ousting Mark Zuckerberg is an important first step toward affecting real change,’ the site further added.

Mark Zuckerberg presently holds around 60% shares in Facebook and it seems difficult for him to be asked to exit. He is also the CEO and board chairman at Facebook. The company is currently still growing and presently the most profitable ventures to date. The New York Times had a written piece which states that its time Facebook is broken up, reports MIT Technology Review, so that new data privacy rules and regulations can be put in place.

With many mishaps and goof ups, Facebook has been playing around with the privacy and security of millions of people around the world. The biggest one to date is the case of Cambridge Analytica which collected data of more than 87 million Facebook users, without their consent. Facebook has allowed third-party companies scrape data off their platform for benefits, and Mark Zucker had accepted this and also apologized for the same. What also went against the social media platform was the claim that the said data mining also affected the Trump Election and Brexit Votes. However, the damage has already been done and there is no way it can be undone. A recent fine of $5 billion on Facebook does not seem enough to answer the big mistake.

In September last year, Facebook admitted to 50 million user’s data being exposed to other parties, and later confirmed that same number to be more than 80 million. This alone was the biggest privacy breach in history. March 2019 was another fallback for the company which went on to declare that it had been storing more than 600 million users’ password in an insecure manner since 2012.

Adding to the existing woes, the social platform also allowed Christchurch, New Zealand, shooter to livestream the attack which witnessed around 50 people being murdered. Facebook failed to take action and the feed was live for almost 20 minutes.

Facebook, though a platform formed more than a decade ago for socializing with friends and family, is now a threat to society. Facebook can fuel voilence, (Facebook also admitted that it failed to stop violence in Myanmar), reports MIT.

With so many issues related and caused by a single social networking platform, will the petition help users force Mark Zuckerberg to step down from Facebook? And even if this happens, will Facebook be a trust-worthy platform to share your personal data ahead? Will other social networking websites learn from this and ensure their users’ privacy is secure?