US 'net neutrality' rules will expire on June 11: FCC 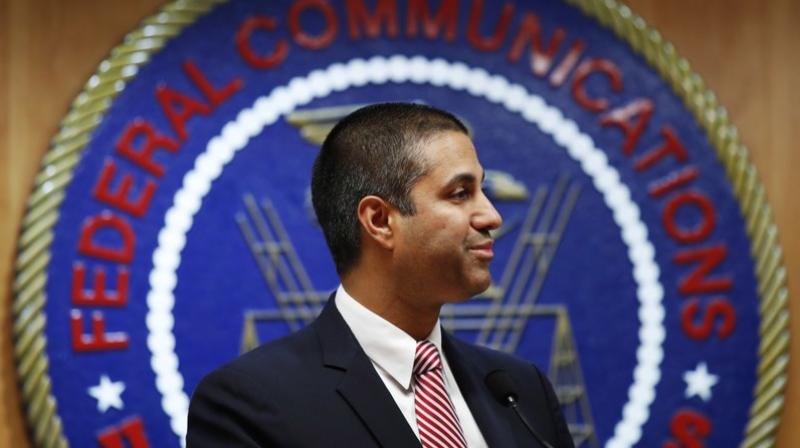 After a meeting voting to end net neutrality, Federal Communications Commission (FCC) Chairman Ajit Pai smiles while listening to a question from a reporter in Washington. The FCC has set June 11 as the repeal date for “net neutrality” rules meant to prevent broadband companies from exercising more control over what people watch and see on the internet. (AP Photo/Jacquelyn Martin, File)

Landmark US “net neutrality” rules will expire on June 11, and new regulations handing providers broad new power over how consumers can access the internet will take effect, the Federal Communications Commission said on Thursday in setting the date.

The FCC in December repealed the Obama-era open-internet rules set in 2015, which bars providers from blocking or slowing down access to content or charging consumers more for certain content. The prior rules were intended to ensure a free and open internet, give consumers equal access to web content and bar broadband service providers from favouring their own material or others.

The new rules require internet providers to tell consumers whether they will block or slow content or offer paid “fast lanes.”

Comcast Corp, Verizon Communications Inc and AT&T Inc have all pledged to not block or discriminate against legal content after the net neutrality rules expire. Reuters first reported the June 11 effective date, disclosed in an FCC document on Thursday.

Acting New York Attorney General Barbara Underwood, a Democrat, said: “the repeal of net neutrality would allow internet service providers to put their profits before the consumers they serve and control what we see, do, and say online.” A spokeswoman for Underwood said the state attorneys general have not sought a stay of the FCC order yet.

A group of 22 states led by New York and others have sued to try to block the new rules from taking effect, and the US. Senate may vote as early as next week to reject the December repeal. The revised rules were a win for internet service providers, whose practices faced significant government oversight and FCC investigations under the 2015 order, but are opposed by internet firms like Facebook Inc and Alphabet.

Some internet providers have said they could eventually offer paid fast lanes, also known as paid prioritization, for some future internet traffic. The repeal of net neutrality is the latest thread in a broader pattern of Republican Trump administration reversals of Democratic Obama administration policies or achievements, such as the Paris climate accords and the Iran nuclear agreement.

Republican FCC Chairman Ajit Pai told reporters on Thursday the rollback of the rules would not harm consumers and would return the internet to the pre-2015 era. “The effect of this will be better, faster, cheaper internet access and the free and open internet that we have had for many, many years,” he said.

Pai said the FCC gave internet providers 30 days to comply with the new transparency rules. He said many politicians had sought to “mislead” the public about the repeal’s impact.

“Now everyone will be able to see the truth for themselves,” Pai said. Democrats objected.

The US Senate is set to vote as early as next week on whether to reject the FCC repeal of the net neutrality rules, but that effort faces an uphill battle. Proponents currently have the backing of 47 Democrats and the two independents who caucus with Democrats, as well as Republican Senator Susan Collins. With the prolonged absence of Republican Senator John McCain due to illness, proponents believe they will win on a 50-49 vote.

Senator Ed Markey said it was “likely” the vote will take place in the middle of next week. On Wednesday, senators officially filed a petition to force a net neutrality vote and 10 hours of floor debate under the Congressional Review Act.

Following Thursday’s FCC announcement, Markey wrote on Twitter: “the Senate must act NOW and pass my resolution to save the internet as we know it.”

If the Senate approves the measure, it would not likely pass the Republican-controlled House of Representatives. If the legislation were to pass the House, President Donald Trump would be expected to veto it.

The FCC voted in December 3-2 to reverse the Obama-era rules barring service providers from blocking, slowing access to or charging more for certain online content, but said under government regulatory rules it would take months before they could legally take effect.

In February, a coalition of 22 state attorneys general refiled legal challenges intended to block the repeal of net neutrality. A number of states have adopted laws aimed at dissuading internet providers from abandoning net neutrality.

Democrats have said they believe the issue would be key in November’s midterm congressional elections, especially among younger internet-savvy voters. Republicans have said the FCC repeal would eliminate heavy-handed government regulations and encourage investment.