Technology   In Other news  10 Oct 2017  McAfee christens Kapil Sharma as India’s riskiest celebrity on Internet
Technology, In Other news

The McAfee study ranks reveals celebrities who are likely to lead to unsafe results, exposing to malicious websites and malware. 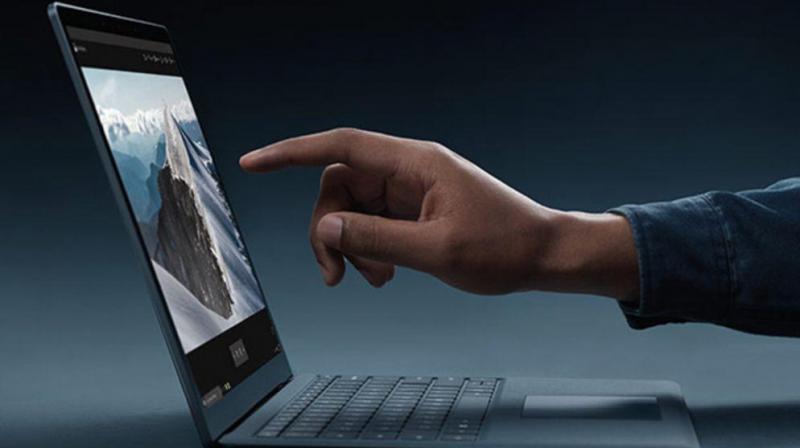 Comedian and actor Kapil Sharma has replaced Sonakshi Sinha as the most sensational celebrity to search for online in 2017. For the 11th year in a row, McAfee researched famous individuals to reveal the riskiest celebrity to search for online. The research reveals which Bollywood icons generate the riskiest search results that could potentially expose their fans to malicious websites.

A prominent male comedian in both the television industry and Bollywood, Kapil Sharma has topped the McAfee Most Sensational Celebrities list 2017. Salman Khan comes in the second place followed closely by Aamir Khan (No. 3). Among the female celebrities, actor and singer Priyanka Chopra stands 4th on the list, who was No. 7 in 2016, followed by Anushka Sharma (No. 5), Sunny Leone (No. 6) and Kangana Ranaut (No. 7). Ranveer Singh (No. 8), Shahid Kapoor (No. 9) and Tiger Shroff (No. 10) round out the rest of the top 10 list.

Cybercriminals continue to use the fascination of consumers with celebrity culture to drive unsuspecting users to potentially malicious websites that can be used to install malware, steal personal information and even passwords. The study, conducted by McAfee and now in its 11th year, highlights the dangers of clicking on suspicious links when searching for celebrity-focused content. 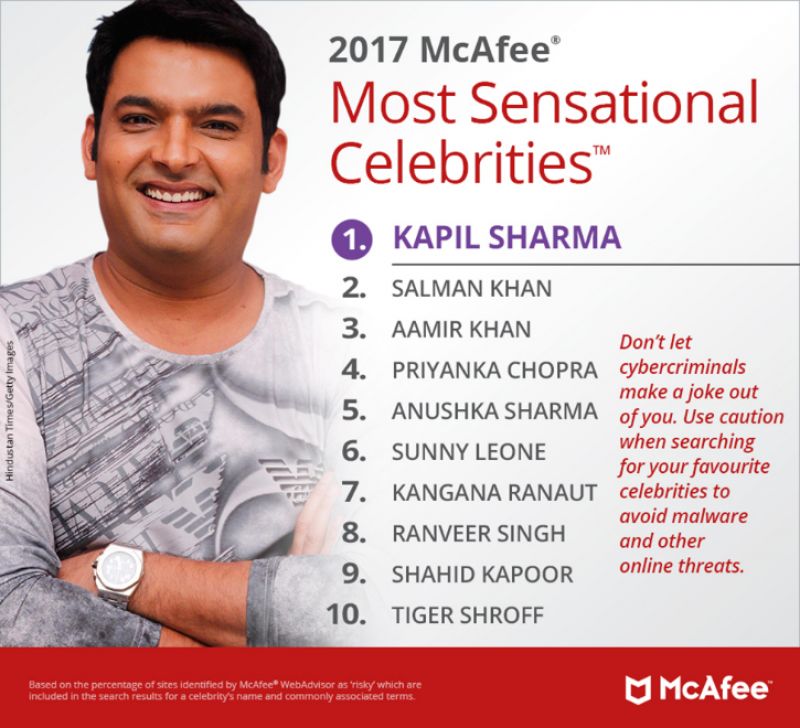 “With today’s digital explosion, the gap between celebrities and their fans has diminished. There’s a looming interest among Indians to know more about their favourite icons, for which there’s a deluge of fresh and readily consumable content made available,” said Venkat Krishnapur, Head of R&D Operations, McAfee. “Cybercriminals are leveraging this interest and preying on consumer vulnerabilities when they compromise on security in favour of convenience. In today’s fast evolving cybersecurity environment, this haste for consumption can be used for malicious intent. Thinking before clicking is as imperative as adopting the right security solutions to stay safe online.”

Searching for “Kapil Sharma” Results in a 9.58 per cent chance of landing on a malicious website, whereas “Salman Khan resulted in 9.03 per cent. Followed closely by “Aamir Khan” at 8.89 per cent, actor and singer Priyanka Chopra stands 4th at 8.75 per cent, who is again followed by Anushka Sharma at 8.47 per cent and Sunny Leone at 8.33 per cent. Kangana Ranaut at 8.19 per cent and Ranveer Singh at 8.06 per cent along with Shahid Kapoor at7.92 per cent and Tiger Shroff at 7.78 per cent end the list.

How to Search Safely

Be careful what you click. Are you looking for the footage of Kapil Sharma’s comedy shows? It’s better to wait for the official airing and re-runs on television and the official websites than to visit a third-party website that could contain malware.

Searching for free MP4s? Watch out! Searching for “free MP4” returned the highest number of risky websites, so it’s important for consumers to be vigilant and ensure they are searching safely.

Browse with security protection like McAfee WebAdvisor. This McAfee tool can help keep you safe by identifying malicious websites and warning the user before they click.

Use cross-device protection. As our daily activities become more ingrained in our digital lives it’s important to keep everything protected. A comprehensive security solution, like McAfee Total Protection, can help ensure that your devices are protected against malware, phishing attacks and device-specific protection in the event of loss or theft.