Net-neutrality supporters protested outside 700 Verizon stores and some 350 people came to chant slogans and wave signs. 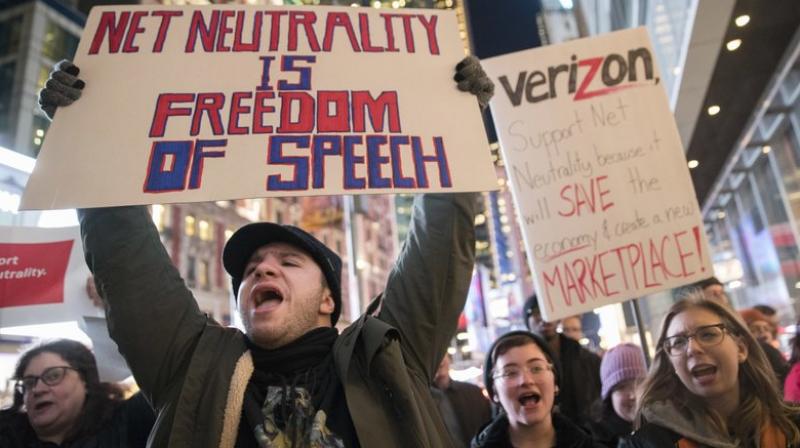 Net-neutrality rules bar cable and phone companies from favouring certain websites and apps — such as their own services — and give the FCC more oversight over privacy and the activities of telecom companies. (Photo: AP)

Net neutrality is a simple concept but a dense and often technical issue normally discussed in tech and telecom circles. Now it’s hit the mainstream. Next week, the Federal Communications Commission plans to vote on gutting Obama-era rules meant to stop broadband companies such as Comcast, AT&T and Verizon from exercising more control over what people watch and see on the internet.

Celebrity complaints and street protests aren’t likely to stop the agency’s vote on Thursday, but activists hope the growing outcry will push Congress to intervene and will show support for stricter regulation down the road.

Net neutrality has been a hot button before; thanks to assists from Silicon Valley and TV host John Oliver speaking out about what they see as threats to the internet. More Hollywood celebrities have been joining the cry against the agency’s direction.

“Long live cute dog videos on YouTube! #RIPinternet. Share what you loved about The Internet,” actor Mark Ruffalo tweeted as he urged people to push Congress to intervene. Big-time Hollywood producer Shonda Rhimes tweeted a link to a story about saving net-neutrality on her lifestyle website.

Net-neutrality rules bar cable and phone companies from favouring certain websites and apps — such as their own services — and give the FCC more oversight over privacy and the activities of telecom companies. Supporters worry that repealing them would hurt start-ups and other companies that couldn’t afford to pay a broadband company for faster access to customers.

Critics of the rules say that they hurt investment in internet infrastructure and represent too much government involvement in business. Phone and cable companies say the rules aren’t necessary because they already support an open internet, and have lobbied hard for their repeal. While libertarian and conservative think tanks and telecom trade groups have spoken up against net neutrality, everyday people have been vocal in protesting the rules’ repeal.

Since the FCC announced just before Thanksgiving that it was planning to gut the rules, there have been about 750,000 calls to Congress made through Battle for the Net, a website run by groups that advocate for net neutrality. By contrast, there were fewer than 30,000 calls in the first two weeks of November. While Congress doesn’t need to approve FCC decisions, it can overrule the agency by passing a law.

Net neutrality also has triggered discussions all over social media, even in groups that typically don’t discuss tech policy. In one Facebook group about leggings seller LuLaRoe, one woman’s lament about the repeal triggered more than 270 responses. They included questions about what net neutrality was, links to explanations and statements of support. The discussion sprawled into the next day.

“Access to a free and fair internet is necessary for a functioning democracy,” said Lauren Gruber, a writer for a branding agency who joined the New York protest. If the net-neutrality rules are repealed, she said, “it’s just another showcase of oligarchy upon America.”

Most people don’t follow what federal agencies like the FCC are doing, even though decisions can have a lot of impact on people’s lives, said Beth Leech, the political science professor at Rutgers University. Having celebrities speak out can help spark people’s interest, she said.

“Protests that draw average people out into the streets across the country are relatively rare,” she said. “It’s the rarity that gives them some of their power.”

The liberal organization MoveOn is urging Americans to speak up for net neutrality. Democratic senators have called for a delay in next Thursday’s vote, while Democratic FCC Commissioner Jessica Rosenworcel urged backers to “make a ruckus.” Some Democrats are hoping that any rollback of net neutrality rules will become a campaign rallying cry in 2018 and beyond.

“Net neutrality has the potential to motivate young and progressive voters to turn out,” said Tyler Law, spokesman for the Democratic Congressional Campaign Committee, which works to get Democrats elected to the House.

“There will be a political price to pay for those who are on the wrong side of this issue because net neutrality’s time as a campaign issue has arrived,” Sen. Ed Markey, D-Mass., a longtime net neutrality supporter, said on a call with reporters. Republican campaign officials didn’t immediately respond to requests for comment.

The FCC’s commenting system has logged 23 million comments, compared with roughly 4 million for the last blockbuster issue — when the agency approved the net-neutrality rules in 2015. An August study by a data firm backed by the telecom industry found that 60 percent of the comments made this year supported keeping the 2015 rules.

But the commenting system has been messy. The FCC says millions of comments used temporary email accounts from fakemailgenerator.com, hundreds of thousands of comments came from one address in Russia and many comments were duplicates.

Some net-neutrality supporters have become intensely personal in their advocacy. FCC Chairman Ajit Pai and his staff have called out ugly and racist tweets and death threats. Pai also said activists came to his home to post signs that referenced his children. One man was charged in November with threatening to kill US Rep. John Katko and his family if the New York Republican didn’t support net neutrality.