The Samsung Cinema LED Screen is expected to expand to movie theaters around the world including the USA and Europe in coming years. 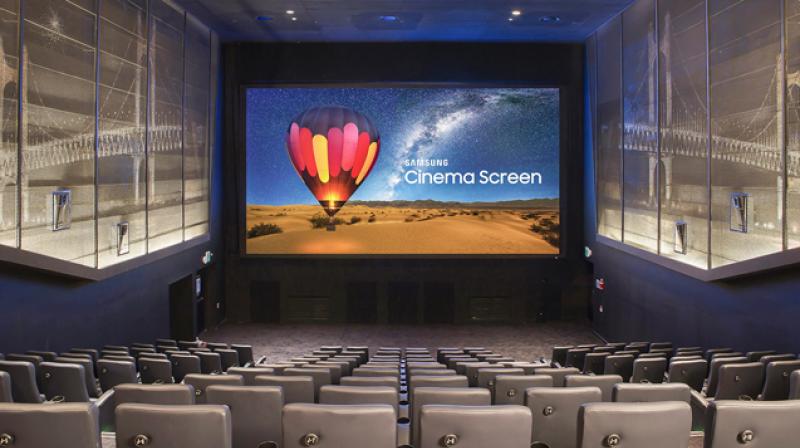 Although it extends nearly 10.3m (33.8ft) wide, the Cinema LED Screen is easy to install and configure within nearly any existing theater dimensions.

Samsung Electronics is expanding its vision for the “Theater of the Future” by bringing its Cinema LED Screen to the Paragon Cineplex theatre in Bangkok, Thailand. Samsung’s Cinema LED Screen, the world’s first DCI-compliant High Dynamic Range (HDR) LED theater display, is being introduced in Southeast Asia for the first time, following installations in Seoul and Busan, Korea, earlier this year.

Samsung last week held a signing ceremony for new partnership with Major Cineplex Group, the largest cinema company in Thailand with more than 110 theaters and 668 movie screens, to convert a 200-seat cinema at the Paragon Cineplex in Siam Paragon into its Cinema LED venue. Several additional premium theater renovations are also expected throughout the region during the coming year.

An upgrade on the screen-and-projector operation the industry has relied on for more than a century, the Samsung Cinema LED Screen reinvigorates cinema presentation through superior visual quality, technical performance and reliability. Although it extends nearly 10.3m (33.8ft) wide, the Cinema LED Screen is easy to install and configure within nearly any existing theater dimensions. The display also amplifies on-screen content through HDR picture quality, powered by ultra-sharp 4K resolution (4,096 x 2,160) and peak brightness levels (146fL/500nit) nearly 10 times greater than that offered by traditional projectors. As a result, movie-goers can enjoy content free of distortion and brought to life through lifelike colors, pristine whites and deep blacks.

As the demands for cinema space evolve, Samsung’s Cinema LED Screen will offer theater managers in Thailand and across the world added flexibility to expand service offerings and generate new revenue. The display maintains a consistent presentation across a range of dark and ambient lighting conditions regardless of the featured content. This versatility will empower cinemas to use theater spaces for concert and sports event viewing, gaming competitions, corporate events and other non-traditional content sources.

The Samsung Cinema LED Screen is expected to expand to movie theaters around the world including the USA and Europe in coming years.

China accuses Britain of unthinkingly towing US line on Huawei