Mercedes showcased the Vision AVTR at the CES 2020, which is known to be a platform for outlandish futuristic technology. 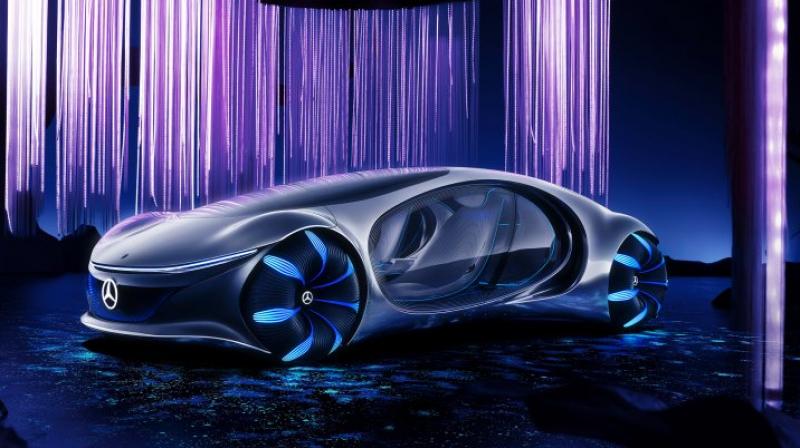 The AVTR features 33 scale-like movable panels that Mercedes has classified as "bionic flaps" that'll allow the car to interact with people outside.

Mercedes Benz has just surprised the whole automotive world with its other-worldly looking concept car that is inspired by the 2009 Hollywood sci-fi Avatar.

The German auto giant showcased the Vision AVTR at the CES 2020, which is known to be a platform for outlandish futuristic technology, reported The Verge.

James Cameron had a big part to play in this unexpected sequel of his movie as he provided valuable inputs to the company to make this machine a reality.

The AVTR features 33 scale-like movable panels that Mercedes has classified as "bionic flaps" that'll allow the car to interact with people outside.

The "seeds of the Tree of Souls" inspired spherical wheels would allow the AVTR to move diagonally and sideways.

In a presentation video, the interior appeared to be a bit too tidy with no steering wheels, which probably indicates that the car would be self-driving. Instead, the central armrest housed an oval-shaped controller that rises from its position as soon as the passenger lays their hand on it.

The Verge also reported that once the controller meets the hand, the seats begin to vibrate in harmony with the passenger's breathing and heartbeat.

Ola Kallenius, the chairman of Daimler rightly put it by saying that the AVTR literally merges man with the machine.

The front controls lighten up with swirling 3D graphics similar to the fictional planet of "Pandora."

Cameron too stepped up on the stage with Kallenius and seconded with the chairman by saying "we will merge."

The concept also includes some family-friendly features for kids sitting on the rear seat that would keep them engaged and entertained through child-friendly gaming and augmented reality experience.