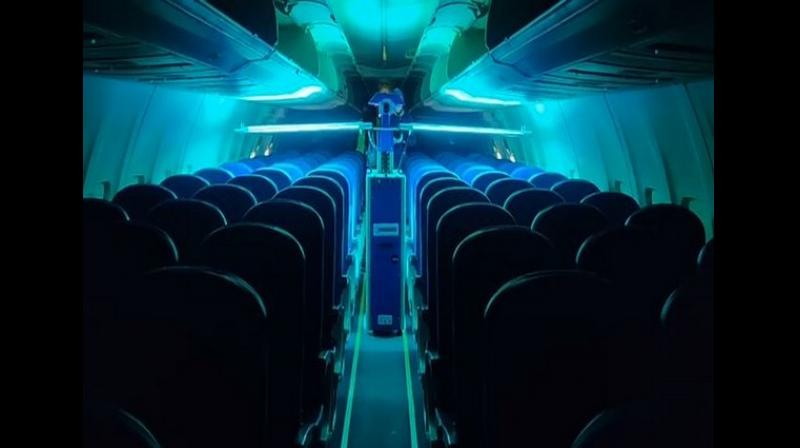 The robotic device disinfecting seats in an aircraft (Photo: ANI)

New Delhi: The Air India Express has become the first airline in India to use robotic technology to clean and disinfect the interiors of aircrafts using an ultraviolet Robotic device.

"A UV (ultraviolet) robotic device fitted with UV disinfection lamping system was engaged by the airline today at Delhi airport to disinfect its Boeing 737-800 aircraft," Air India Express said in a release on Thursday.

Air India Express said there are plans to extend this technology for its aircraft operating from other airports in its network in the country.

Fitted with collapsible arms, the UV-C light reaches the areas which are difficult to access while performing "In-Cabin" disinfection manually.

The technology has been tested and approved by NABL (National Accreditation Board for Testing and Calibration) laboratory for its efficiency to disinfect the surfaces from germs, bacteria and viruses, a statement from the airline said.
The technology was launched in India in collaboration with ground handling agency AISATS.