Technology   In Other news  06 May 2020  Samsung heir Lee apologises for scandal over his succession and case for bribing former president
Technology, In Other news

S Korean president Park Guen-hye was ousted for allegedly accepting bribes to ensure a smooth transition for Lee to succeed his ill father. 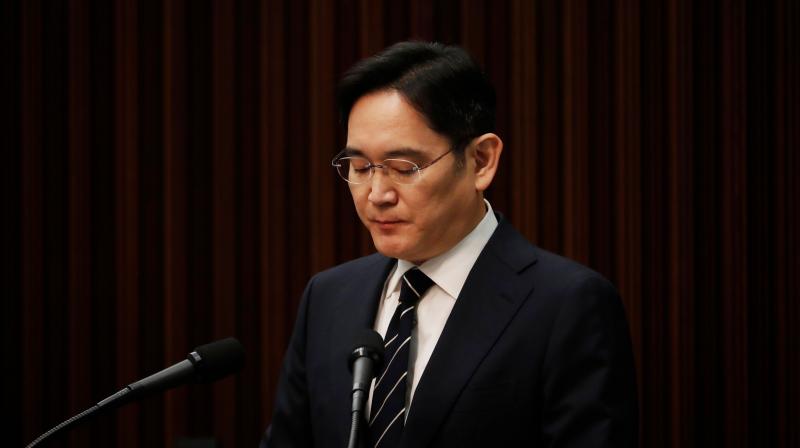 Samsung Electronics vice-chairman Lee Jae-yong said he would not allow his children to succeed him at the firm. “I will make sure that there will be no more controversy over the succession of management,” Lee said during a news conference at the company's office building in Seoul, South Korea, May 6, 2020. He added: “I will never take any actions that go against the law.” (Photo | AP)

Seoul: The heir to the Samsung empire bowed in apology Wednesday for company misconduct including a controversial plan for him to ascend to the leadership of the world’s largest smartphone maker.

Lee Jae-yong is vice-chairman of Samsung Electronics and was jailed for five years in 2017 for bribery, embezzlement and other offences in connection with the scandal that brought down South Korean president Park Geun-hye.

The 51-year-old was released a year later on appeal but is currently undergoing a retrial.

“Our technology and products are being hailed as first-class but the public gaze towards Samsung still remains harsh,” Lee said. “This is my fault. I apologise.”

He will not allow his children to succeed him at the firm, he said in steady tones, swallowing occasionally.

“I will make sure that there will be no more controversy over the succession of management,” Lee said, adding: “I will never take any actions that go against the law.”

Wednesday’s apology came at the request of Samsung’s compliance committee, which oversees the firm’s transparency in its corporate dealings.

Lee has effectively been at the helm of the sprawling Samsung group since his father and group chairman Lee Kun-hee was left bedridden by a heart attack in 2014.

The court case centred on millions of dollars the Samsung group paid Park’s secret confidante Choi Soon-sil, allegedly for government favours including ensuring a smooth transition for Lee to succeed his ailing father.

The scandal highlighted shady connections between big business and politics in South Korea, with the ousted president and her friend accused of taking bribes from corporate bigwigs in exchange for preferential treatment.

Samsung Electronics is the flagship subsidiary of the group, which is by far the biggest of the family-controlled conglomerates, or chaebols, that dominate business in the world’s 12th-largest economy.

Its overall turnover is equivalent to a fifth of the national gross domestic product and it is crucial to South Korea’s economic health.

Chairman Lee Kun-hee is listed as South Korea’s richest man—and the world’s 65th—by Bloomberg Billionaires, with a fortune estimated at $15.7 billion, while Lee Jae-yong has a separate listing of his own, and a net worth of $5.7 billion.

In March, the Samsung compliance committee—which was set up in response to a court order—said many “disgraceful” incidents involving the Samsung Group were linked to an alleged succession scheme for Lee and advised him to apologise publicly.

For almost 50 years Samsung successfully avoided the unionisation of its workers—sometimes adopting ferocious tactics according to critics—until last November.

“I sincerely apologise to everyone who has been hurt by issues involving Samsung’s labour union policy,” Lee said.

The company will guarantee workers’ rights and act in accordance with employment regulations, he added.

But the firm—which saw operations suspended at 11 overseas assembly lines—warned of further falls to come as consumer demand is “significantly” hit by the disease.