Technology   In Other news  06 Apr 2020  In Tech Talk Today, Prama Hikvision thermal cameras, Tesla’s prototype of ventilator made from car components
Technology, In Other news 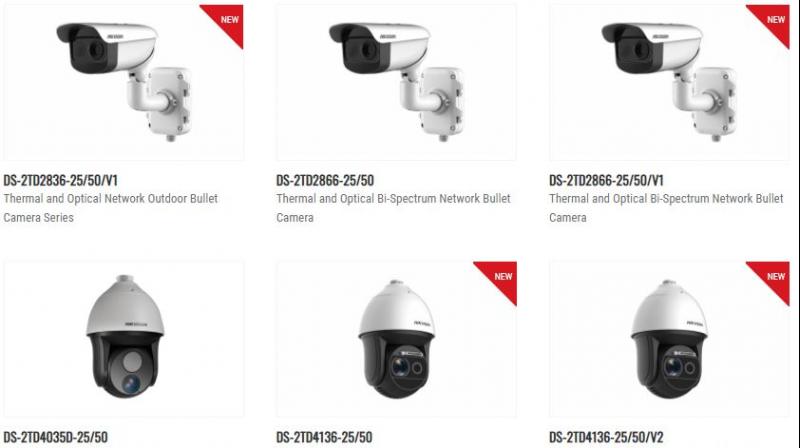 Hikvision's array of thermal cameras that can be used in public places to detect fever, without contact with the person.

Chennai: As India’s lockdown has just over a week left to go and restrictions on movement could get lifted, screening of people to catch early symptoms of COVID-19 becomes crucial to contain the spread of the contagion. Security and surveillance solutions provider Prama offers its Hikvision fever screening thermal cameras for the task.

Prama Hikvision thermal cameras use infrared waves to detect elevated body temperature, and can be used in places where people gather in large numbers, such as airports, railway stations, bus depots, offices and hospitals.

Similar devices have already been in use in airports for early screening of passengers.

As thermal cameras takes only a second to detect body temperature and that too without contact, they can be used effectively while following physical distancing, as it is fast enough to prevent crowds from accumulating at entry points of buildings.

Meanwhile, electric car maker Tesla showed off ‘ventilators’ that were made from car components already available at its factory, in a video on Sunday.

The device featured in the video was made up of pumps, compressors, tubes and an oxygen mixing chamber used in Tesla’s electric sedans. These were connected to a touchscreen display panel that is used in Tesla’s Model 3 car, which tracks the intake of oxygen and output of carbon dioxide and is run by a computer used in the Model 3’s infotainment system.

The ‘ventilator’ is a prototype, and Tesla did not say whether it would be able to produce enough number of the devices to supply to hospitals. Besides, the machines that act as lungs for patients and do the breathing for them have to be approved by the Food and Drug administration of the United States before they can be deployed for hospital use.

Last week, Tesla CEO Elon Musk said the company had supplied 1,000 ventilators to hospitals already. But those were not devices that are typically understood to be ventilators, they were breathing-assist devices. The term ventilator, as used in common parlance, refers to invasive devices that have a tube inserted into the trachea or windpipe of a patient.

Before the tube is inserted, patients are put into medically induced comas and will be able taken off the ventilator and brought back to consciousness only if a doctor is convinced that the patient can breathe on their own.

Ventilators, or vents as doctors refer to them, are the need of the hour for coronavirus patients whose symptoms are severe. Such patients’ lungs fill up with fluid because of which they cannot breathe on their own. They need ventilators to breathe for them while their lungs rest and recover on the strength of medications administered to them.

India, for example, would need 50,000 ventilators to treat patients in the next two months, the Indian Express reported quoting government sources.