Technology   In Other news  06 Mar 2020  A vacation on the ISS for the first space tourists likely in 2021
Technology, In Other news 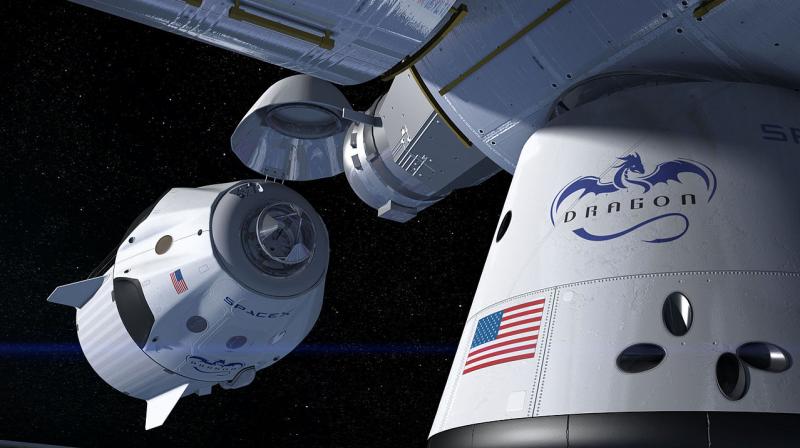 This artist's concept shows a SpaceX Crew Dragon docking with the International Space Station as it will during a mission for NASA's Commercial Crew Program. (Photo | Wikimedia Commons)

Chennai: Space tourism has been talked about as the next big thing for the uber rich traveller, and now two of three golden tickets are on offer for a 10-day trip to the International Space Station (ISS). One seat, which cost USD 55 million, has already been booked for the trip on Elon Musk’s SpaceX rocket in 2021.

The identity of the person who purchased the first ticket has not been revealed.

The first private human spaceflight, which is slated for the second half of next year, will be a collaboration between Axiom Space, a Houston-based startup owned by a former manager of the NASA-run portion of the ISS, and rocket company SpaceX, the New York Times reported.

Axiom announced that it had tied up with Elon Musk’s company to transport tourists on SpaceX Crew Dragon modules, which are currently being tested to take NASA astronauts to the low Earth orbit station in a few months. Not counting the travel time to and from the ISS, the tourists will be spending 8 days on the space station, once the Crew Dragon module is attached to it.

Before embarking on their space flight, tourists will be have to undergo a 15-week training on Earth. Accompanying the tourists will be an Axiom-trained astronaut who will be the flight commander.

Apart from SpaceX and Axiom, the Richard Branson owned Virgin Galactic and Jeff Bezos’s Blue Origin are also planning to offer similar trips. However, their proposals are much more modest, with flights only planned for 11 to 90 minutes and stopping just short of the Karman Line, 100 km from earth, which is considered the point where space begins. No travel dates have been confirmed.

Besides, Axiom is not the only suitor that SpaceX has for its Crew Dragon module. Space Adventures, another private space venture, also announced a deal with SpaceX last month for a free-flying trip of 5 days, for up to four tourists. That trip is likely to take off in late 2021 or early 2022.

However, what the Axiom and SpaceX tie-up offers is a much more ambitious vacation on the ISS, which is technically in Space, orbiting at about 350 km from the Earth’s surface.