Technology   In Other news  05 Aug 2020  SpaceX’s Mars rocket prototype has successful brief flight and landing
Technology, In Other news 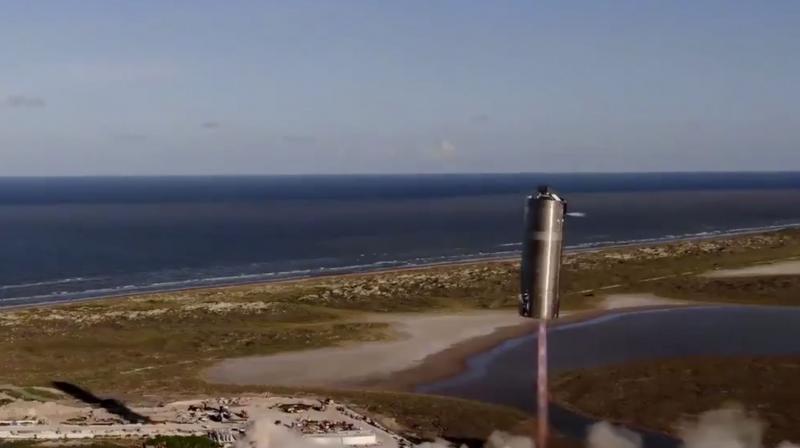 SpaceX plans to launch reusable Starships atop still-in-the-works rockets, carrying cargo or crew not only to low-Earth orbit but also the Moon and Elon Musk’s most desirable destination, Mars. The latest test model of the rocket is relatively plain: It stands a full-scale 100 feet (30 meters) tall and resembles a steel silo—or stretched-out can—with a cap on top. (Photo | AP)

Cape Canaveral, Florida: SpaceX launched a prototype of its Mars rocketship hundreds of feet into the air, then landed it upright in a successful test flight.

The flight lasted barely 45 seconds and reached just 500 feet (150 meters) Tuesday night at the southeastern tip of Texas near Brownsville, but was an important first for SpaceX’s Starship. Some earlier tests ended in explosions on the pad.

Musk said several more short hops are planned before a test version of Starship aims for a high altitude. The latest test model is relatively plain: It stands a full-scale 100 feet (30 meters) tall and resembles a steel silo _ or stretched-out can _ with a cap on top.

The private company plans to launch reusable Starships atop still-in-the-works rockets, carrying cargo or crew not only to low-Earth orbit but also the Moon and Musk’s most desirable destination, Mars. The entire stack will stretch nearly 400 feet (120 meters).

On Sunday, SpaceX safely returned two NASA astronauts from the International Space Station following a two-month test flight. Their Dragon capsule splashed down in the Gulf of Mexico off the coast of Pensacola, Florida.

SpaceX is now the only private company to fly people to and from orbit.