The wheelchair creates a map of the surrounding environment and static as well as dynamic obstacles using a laser sensor. 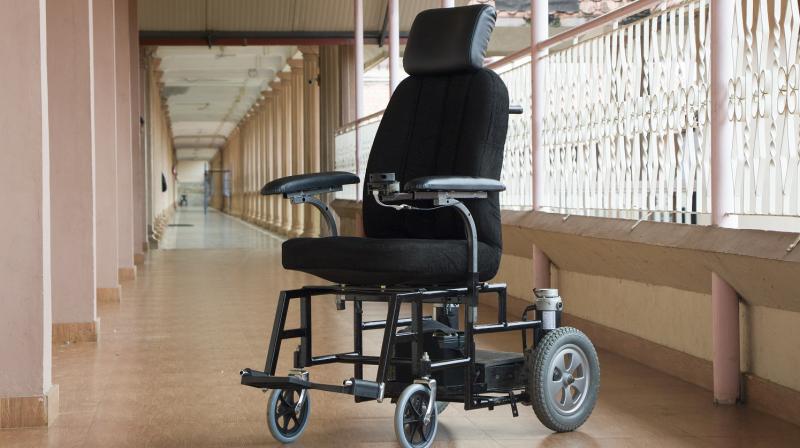 The user can touch any point on the generated map, and the wheelchair will drive to that place automatically without user intervention, navigating its own path and avoiding obstacles

Three final-year B.Tech students of Amrita Vishwa Vidyapeetham led by their professor have developed a self-driving wheelchair that can safely take a user from one point to another by navigating its own path and avoiding obstacles on the way. Called Self-E, the revolutionary wheelchair uses a Robotic Operating System (ROS) for autonomous navigation. It creates a map of the surrounding space, along with static and dynamic obstacles, using a laser sensor and displays it through a smartphone app. The user can then touch any point on the generated map, and the wheelchair will drive to that place automatically without user intervention.

In contrast to the imported self-driving wheelchairs which are quite expensive, the young inventors of Amrita have managed to produce the prototype below Rs 1 lakh. Such comparatively low cost promises to be a boon to wheelchair-bound patients in India once the technology is successfully commercialised.

Said Dr. Rajesh Kannan Megalingam, Asst. Professor of Electronics and Communications and Director of Humanitarian Technology Lab at Amrita Vishwa Vidyapeetham, who mentored the undergraduate engineering students and was the brains behind the project: “The Self-E self-driving wheelchair is unique in the sense that it is the first self-driving wheelchair in India built by research lab of a university without any collaboration with foreign universities or companies. It now needs to be tested in different environments like hospitals and airports with patients and wheelchair users. The current version is a successful prototype and, with the help of Technology Business Incubator of Amrita Vishwa Vidyapeetham, we hope to commercialize the product.”

The three students who designed the Self-E wheelchair – Chinta Ravi Teja, Sarath Sreekanth and Akhil Raj – have been working for the last two years as junior researchers at Amrita Vishwa Vidyapeetham’s Humanitarian Technology Lab. Explaining the benefits of Self-E, student Chinta Ravi Teja said: “The self-driving wheelchair allows patients to be easily transported from one place to another anywhere at a hospital, airport or even a home. If patients are able to operate a smartphone, they are relieved from the continuous use of traditional joystick to steer the wheelchair. With a simple touch on the map displayed on the mobile screen, the wheelchair takes them to the destination. They can have complete control over the wheelchair without anyone’s help. On the other hand, if some patients have a problem in using a smartphone, a friend or family member or assistant can use the Android App to transport them without the need to physically push the wheelchair.”

The Self-E wheelchair addresses a critical need. In a hospital or airport, people with mobility issues depend on a manual wheelchair along with wheelchair pushers, which hinders their freedom of movement. If they use a powered wheelchair with joystick control, they need to manipulate the joystick and steer the wheelchair all the way to the destination. Self-E, in contrast, maps the surrounding environment, including dynamic and static obstacles such as people, walls, pillars, tables, chairs, etc. using a laser sensor called LiDAR. The map is automatically loaded onto an Android smartphone or tablet through a specially developed app. Self-E’s autonomous operation allows users to relax and sip a cup of coffee, read a newspaper or chat with friends as the wheelchair takes them to the desired destination point on its own. The Self-E wheelchair can also be used at homes, retirement communities, assisted living communities, restaurants, washrooms, etc.

Said Amrita Vishwa Vidyapeetham student Sarath Shreekanth: “The development of an algorithm for the self-driving wheelchair to perfectly map the environment and plan the proper path to the destination was the first challenge. We used the Robotic Operating System (ROS) to address this successfully. The second challenge was avoiding dynamic obstacles like people and pets while the Self-E was navigating to the destination. The LiDAR sensor along with the Robotic Operating System helped by detecting such obstacles and recalculating a new path to the destination. Developing a cost efficient self-driving wheelchair was another issue. We used a single LiDAR sensor to keep the overall costs of the product as low as possible. Making the Self-E enter and exit through a door was a difficult task but we could succeed in this after fine-tuning the system.”