The app-based service has seen a staggering growth in popularity across the globe. 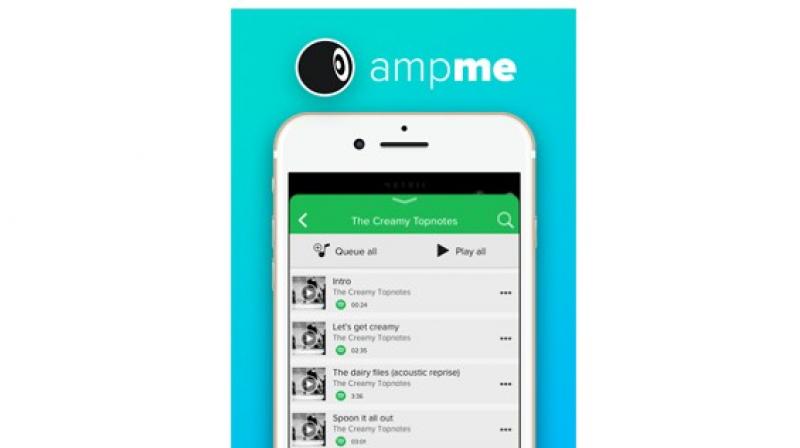 When the host hits the 'Play' button, friends will automatically see the nearby party and can click 'Join' with which their devices auto-sync, thereby surrounding the group by the music of their choice.

The app-based service has seen a staggering growth in popularity across the globe. It enables smart devices to connect with one another and play the same audio content, whilst allowing them to work in unison as a high decibel speaker.

With the AmpMe app, Android and iOS users can play the same music together in perfect sync, giving a powerful surround sound effect to them. The free-to-use app works by enabling the ' Host' to sync their music with their friends' devices. The host can play music from SoundCloud, YouTube, Spotify or their own local library.

Instead of relying on Bluetooth or Wi-Fi technology to connect devices together, AmpMe uses a server-centric proprietary audio fingerprinting technology to create the perfect synchronisation, and works with a regular data plan, Wi-Fi network or personal hotspot.

When the host hits the 'Play' button, friends will automatically see the nearby party and can click 'Join' with which their devices auto-sync, thereby surrounding the group by the music of their choice.

The app has seen significant upgrades as AmpMe included 'Offline Mode'. Here, the host creates a personal hotspot on their phone, which establishes a unique Wi-Fi network for the party, enabling other nearby users to join. 'Offline Mode' plays any song stored on the host's device via AmpMe's 'My Library' tab, streaming their personal music library in perfect sync with friends. Partygoers wishing to join the party simply join the Wi-Fi network, open the app and automatically join the party created by the host phone. This new 'Auto-join' feature makes it easy to sync unlimited phones, seamlessly.

"Our efforts towards creating a unique and innovative product have seen positive outcomes, as we see the service extend across the globe. AmpMe is a global app by nature, by that it can be used by any person who listens to music and has a smartphone, making it the most versatile service available for music lovers. With expanding internet connectivity, the market is ripe for digital companies," said Martin-Luc Archambault, CEO and Founder, AmpMe.

AmpMe recently secured USD eight million in series A funding, bringing their total funding raised to USD ten million to date. The company plans to use the latest funding to hire the best talent, further invest in product development and in the underlying technology, developing strategic partnerships and global expansion.

AmpMe is compatible with iOS and Android smartphones and tablets. Android users can also use AmpMe with Bluetooth speakers that include a microphone. An Apple Watch app also allows party hosts to control AmpMe playback.

AmpMe is available for free in the iOS App Store and Google Play.