Technology   In Other news  05 May 2020  Executive at Amazon says he quit to protest firing of workers and toxic culture of the workplace
Technology, In Other news

Among those fired was a New York warehouse worker who led a strike last month, pushing for more protections for workers against covid-19 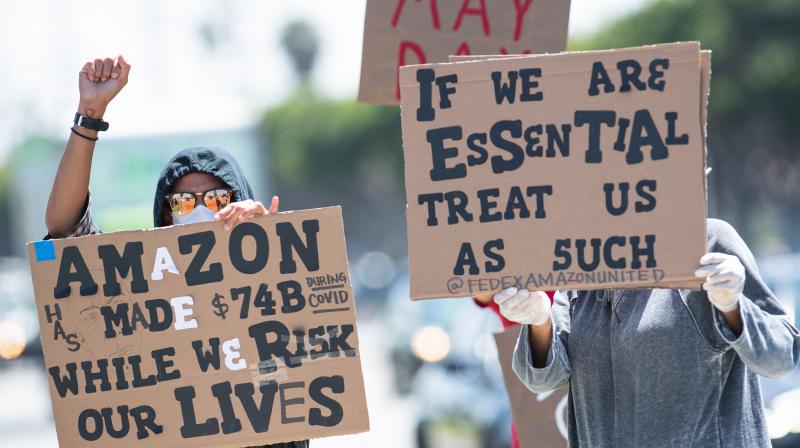 Workers protest against the failure from their employers to provide adequate protections in the workplace of the Amazon delivery hub on National May Day Walkout/Sickout by workers at Amazon, Whole Foods, Innstacart and Shipt amid the Covid-19 pandemic on May 1, 2020, in Hawthorne, California. (Photo | AFP)

New York: An Amazon executive said he quit his job at the online-retail giant to protest the firing of employees who spoke up about the conditions inside the company’s warehouses and its record on climate change.

Tim Bray, a vice president at the company, wrote in a blog post that he left his job last week “in dismay” after Amazon fired several workers who publicly criticized the company. He said the firings were “evidence of a vein of toxicity running through the company culture.”

Amazon, which is based in Seattle, declined to comment.

Among those given the pink slips was a New York warehouse worker who led a strike last month, pushing Amazon for more protections for workers against the new coronavirus. At the time, Amazon said the worker was fired for not obeying social-distancing rules.

Bray, who said he worked at Amazon’s cloud business for more that five years, said he brought up the firings internally at the company.

“That done, remaining an Amazon VP would have meant, in effect, signing off on actions I despised,” he wrote. “So I resigned.”