The game is gorgeous and enjoyable in parts. 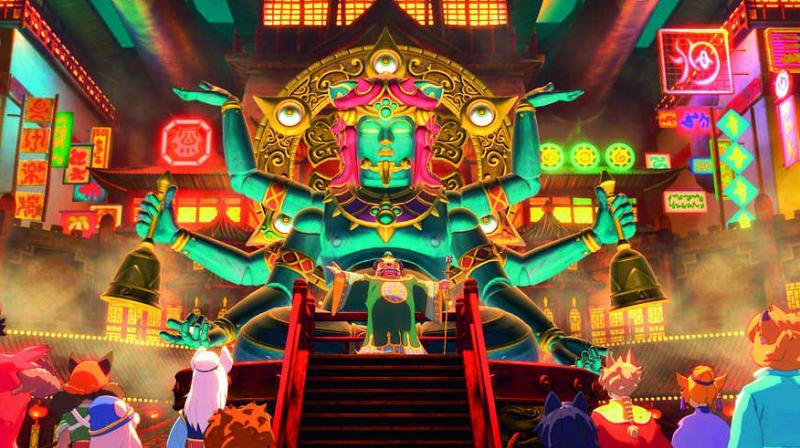 The game has a real time battle system, with buttons mapped to light, heavy and ranged attacks, evade and skills that can be used with R2.

Ni no Kuni II: Revenant Kingdom opens with a nuke hitting a city, which seemingly sends our protagonist Roland into a fantasy world, in a kingdom known as Ding Dong Dell. After rescuing Evan, the rightful heir to the throne from an assassination plot, the two set out to create a nation of their own in order to end war once and for all.

The game has a real time battle system, with buttons mapped to light, heavy and ranged attacks, evade and skills that can be used with R2. Three members of your party fight at the same time and you can freely switch between them at will. In addition to a ranged weapon, each character can equip three melee weapons and freely switch between them as well. Landing hits increases a percentage for every weapon, which upon reaching 100 per cent lets you unleash a powered up version of a skill. You will collect and upgrade creatures known as Higgledies that act like support party members during fights. They can not only heal, buff and debuff; a prompt will let you use their special abilities such as creating a healing circle or firing canons at the enemy.

It’s a fun battle system and combat feels fluid as well as responsive. However, there isn’t a lot of depth to the character progression system and customisation options. Fights often resolve to mashing buttons and can get extremely easy due to some balancing issues.

Ni no Kuni II also features two vastly different systems that are equally important. Skirmishes consist of elements from strategy games, where you can take control of an army of four battalions. You cannot directly control the fights; just position yourself so that your allies can act in unison. You can however use various special abilities such as setting up walls or shocking enemies. It’s a fairly straightforward mini-game, but feels completely unnecessary. The game does expect you to take part in Skirmishes as it is required to complete the story as well as some side quests.

Kingdom building, the other central pillar of the game, gets tedious fairly quickly, but it is rewarding should you choose to invest time. You can set up various shops and facilities all over the kingdom, which can help you research new abilities, gain material for quests or buy and upgrade your equipment. The more useful abilities can help you in different parts of the game, whereas others will let you develop your kingdom more efficiently. Keep in mind, the entire process of doing side quests to gain citizens, collecting coin, waiting for researches to finish and other parts of management is extremely time consuming and not all that fun if you are not interested in its mechanics. Unfortunately, developing your kingdom up to a certain point is a requirement to finish the game, which will take many painful hours if you have not been working on it since the beginning.

Ni no Kuni II: Revenant Kingdom spreads itself too thin across various genres and systems. Instead of achieving synergy, the result is a lack of focus, depth and engaging gameplay in many of its core mechanics. Going beyond the dull characters, the game is littered with fetch quests and the battle system, while fluid, isn’t that engaging either. Ni no Kuni II is breathtakingly gorgeous and enjoyable in parts; just don’t expect to be consistently entertained.