Technology   In Other news  03 Jul 2020  Black lives don’t matter at Facebook, only on their posters, staffer files discrimination complaint
Technology, In Other news

This isn’t the first criticism a Black employee has levelled at Facebook. 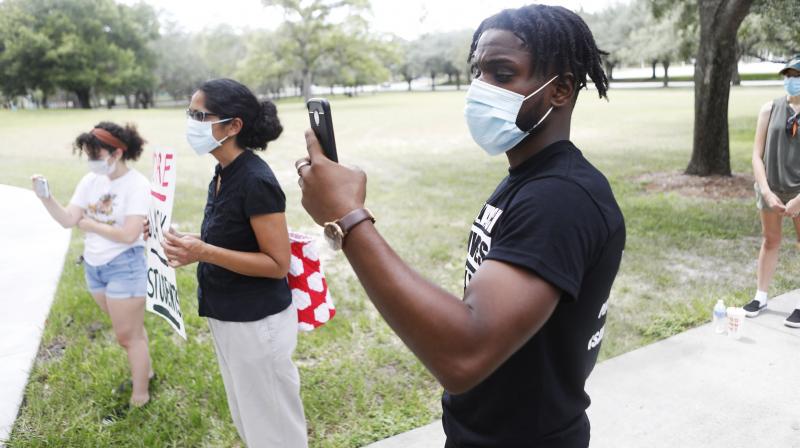 Black workers account for 3.8% of all U.S. Facebook employees and 1.5% of all U.S. technical workers at the company. Those numbers have barely budged over the past several years, a common pattern across large Silicon Valley firms. In this picture, Zachary Greene wears a face mask while protesting in front of the Lifsey residence where the USF President Steven Currall lives on campus on July 2, 2020 in Tampa, Florida. Tampa Bay Students for Democratic Society protest at the University of South Florida demanding an increase in Black student enrollment, employ more Black faculty and staff, more financial aid, and make direct connections with the surrounding community. (Photo | AFP)

Oakland, California: A Black Facebook employee, joined by two others who were denied jobs at the social network, has filed a complaint against the company, saying it discriminates against Black workers and applicants in hiring, evaluations, promotions and pay.

The charge was filed with the Equal Employment Opportunity Commission by Oscar Veneszee, Jr., who has worked as an operations program manager at Facebook since 2017 and claims he has not been fairly evaluated or promoted despite his “excellent performance” at the company. Two others joined Veneszee’s complaint, saying they were unlawfully denied jobs at the company despite being qualified.

Facebook said in a statement it takes discrimination allegations seriously and investigates every case.

“We believe it is essential to provide all employees with a respectful and safe working environment,” said spokeswoman Pamela Austin.

Black workers account for 3.8% of all U.S. Facebook employees and 1.5% of all U.S. technical workers at the company. Those numbers have barely budged over the past several years, a common pattern across large Silicon Valley firms.

This isn’t the first criticism a Black employee has leveled at Facebook. Mark Luckie, who left the company in 2018, sent a memo to his coworkers on his last day _ also posted on Facebook _ that chronicled what he called Facebook’s “black people problem.”

“Facebook’s disenfranchisement of black people on the platform mirrors the marginalization of its black employees,” Luckie wrote. “In my time at the company, I’ve heard far too many stories from black employees of a colleague or manager calling them ‘hostile’ or ‘aggressive’ for simply sharing their thoughts in a manner not dissimilar from their non-Black team members.”

According to Veneszee’s complaint, filed on Thursday, “people of color and Black workers in particular remain underrepresented at all levels of Facebook and especially at the management and leadership levels. They do not feel respected or heard. And they do not believe that Black workers have an equal opportunity to advance their careers at Facebook.”

While there may be Black Lives Matter posters on Facebook’s walls, the complaint says, “Black workers don’t see that phrase reflecting how they are treated in Facebook’s own workplace.”