Technology   In Other news  01 Jun 2020  Sundar Pichai throws Google's weight behind black community in US; had opposed Muslim ban earlier
Technology, In Other news

Although he did not comment on the discriminating Citizenship Amendment Act in India, he has spoken up for Muslims during Trump’s Muslim ban 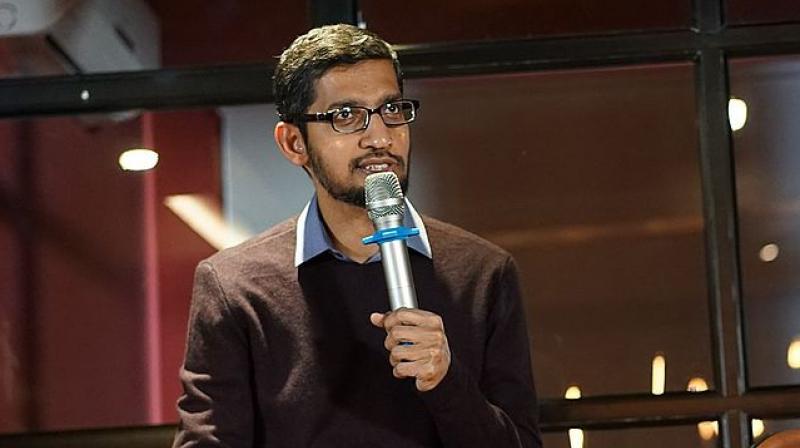 “For those feeling grief, anger, sadness & fear, you are not alone,” Pichai said, sharing a screenshot of the Google search home page which said, “We stand in support of racial equality, and all those who search for it.” (Photo | Wikimedia Commons - Nguyen Hung Vu)

Washington: Google stands in support of racial equality, the tech giant’s Indian-American CEO Sunder Pichai has said, expressing solidarity with the African-American community in the US in wake of protests sparked by the death in police custody of African-American George Floyd.

Floyd, a 46-year-old African American restaurant worker, died in Minneapolis on Monday after a white police officer pinned him to the ground. Video footage showed the officer kneeling on Floyd’s neck as he gasped for breath, sparking widespread protests across the US.

The police officer has been fired, and on Friday was arrested and charged with third-degree murder and manslaughter.

Pichai said that the company has decided to share its support for the racial equality in solidarity with the black community and in memory of Floyd on Google and YouTube home pages in the US.

“Today on US Google & YouTube homepages we share our support for racial equality in solidarity with the Black community and in memory of George Floyd, Breonna Taylor, Ahmaud Arbery & others who don’t have a voice,” Pichai wrote on Twitter on Sunday.

“For those feeling grief, anger, sadness & fear, you are not alone,” Pichai said, sharing a screenshot of the Google search home page which said, “We stand in support of racial equality, and all those who search for it.”

Pichai has been consistent in his stand against discrimination in the United States. Earlier when President Trump had imposed a ban on immigrants from Muslim nations, Pichai had said, “It is “disheartening to see the intolerant discourse playing out in the new...But we must speak out — particularly those of us who are not under attack.”

However, he has steered cleared of commenting on similar issues in India, where the Citizenship Amendment Act paves way for people of every religion except Islam from India’s neighbouring countries to seek citizenship in India. Combined with the National Register of Citizens, the home minister of India hinted, the CAA would disenfranchise the Muslim community.