AirTamer purifies air around it and makes breathing better and pure. 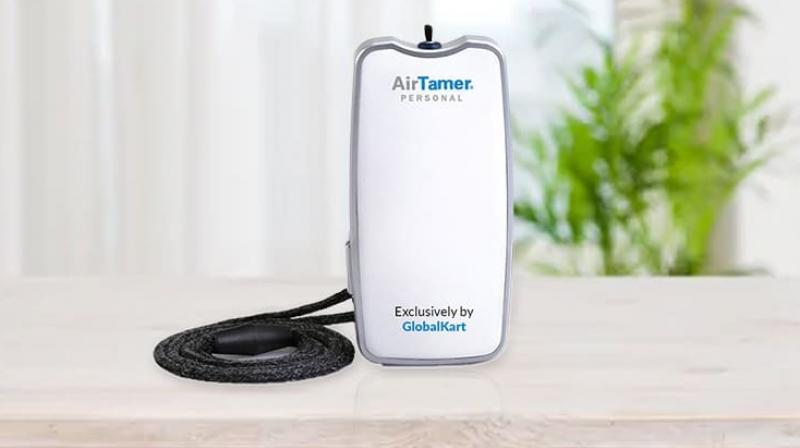 Air Tamer emits a constant stream of healthy negative ions that force airborne pollutants away from your personal space giving you a zone of cleaner, healthier air.

The air quality in Delhi, according to a WHO survey of 1600 world cities, is the worst of any major city in the world. India's Ministry of Earth Sciences published a research paper in October 2018 attributing almost 41 per cent of PM2.5 air pollution in Delhi to vehicular emissions, 21.5 per cent to dust and 18 per cent to industries. Recently, a non-smoker woman became a victim of stage 4 lung cancer - all because of the air she was breathing.

Offering relief to NCR residents, GlobalKart has launched AirTamer in India, a simple device to be worn as a neckpiece - AirTamer purifies the air around it and makes breathing better and pure.

Air Tamer emits a constant stream of healthy negative ions that force airborne pollutants away from your personal space giving you a zone of cleaner, healthier air. The ultra-compact and incredibly versatile design of the Air Tamer makes it easy to carry and simple to use. An individual can wear it around the neck and commute freely. It is easily charged with a standard USB cable available in-the-box. Unlike other air purifiers, the Air Tamer does not have any filter that needs to be replaced periodically.

Over 2 million negative ions are emitted from the Air Tamer every second. These negative ions attach themselves to air particles like allergens, viruses, etc in the air and negatively charge those particles. These negatively charged particles naturally get attracted to positively charged surfaces in the surrounding, rather than continuing their way towards the breathing passage of an individual. This reduces the probability that one may inhale the bad particles in the air and suffer from illness. This wearable Air purifier is widely accepted in Japan and the United States.

AirTamer has been lab-tested at internationally recognized Intertek Testing Services (ITS). It has been confirmed to be #1 in terms of cleaning effectiveness and has proven to clean 9X better than our closest competitor. Another independent test was held at the prestigious Kitasato Research Center in Japan which has confirmed that the AirTamer removes 99 per cent of viruses from the air over just 20 minutes.

AirTamer is available on Amazon, Paytm Mall and GlobalKart.com.