This model features a tower size, and is around 3.3ft in height and an approximate diameter of 196mm. 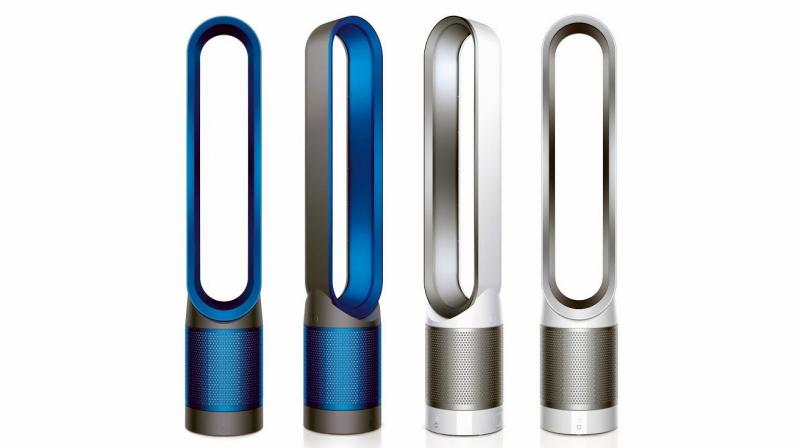 With a built-in internet connected and app-driven operation, silent operating and elegant looks, the Dyson air purifier gets big thumbs up from our end.
Rating:

Dyson recently entered India with a range of home appliances. These include air purifiers, hair dryers and vacuum cleaners. The product has a robust engineering team and ensures quality across both performance and looks. However, the products do stick a high price tag on them, but the company ensures you get the best of both worlds with respect to style and performance. We have been using the Dyson Pure Cool Link Tower air purifier for a while and were impressed with its looks and working. 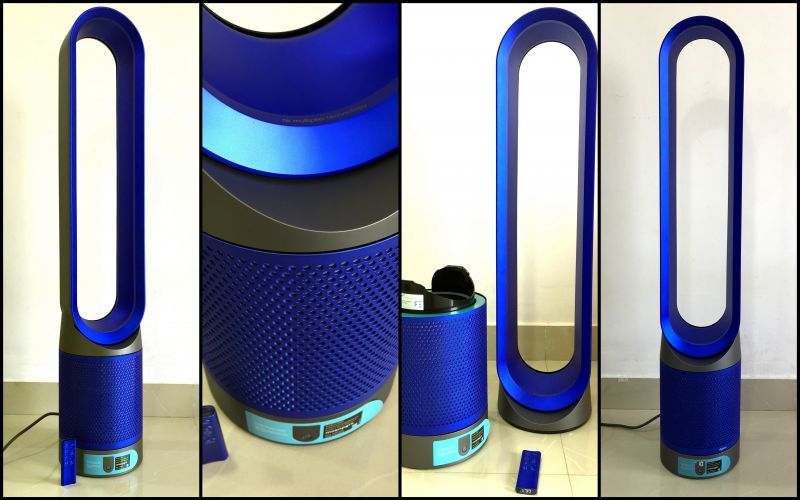 The Dyson Pure Cool Link Tower air purifier is basically a bladeless fan that combines an air purifier to make a single device do both functions at once. The fans used here are bladeless that run silent, are powerful, noiseless and uses the air multiplier technology to drive clean air while being the most silent in the room.

The unit is very elegant and unlike most air purifiers available today, you will want to flaunt it in your living room. It uses a dual-tone exterior with a unique design that stands slim and tall and occupies very little space in a room. The air purifier is a two-in-one device that functions as an air multiplier with the bladeless fan technology by sucking in air from the bottom, purifies it and blows it across the room. This model features a tower size, and is around 3.3ft in height and an approximate diameter of 196mm. it is round at the bottom and runs flat towards the top. The top has an oval shaped gap/hole or window as you could term it and is made from a hollow plastic chassis to keep it as light as possible.

The oval window has a tiny slit running all around the inner rim from where the purified air is pushed out at a high speed. This air travelling at a high velocity creates a pressure drop behind the oval window, thus sucking in air from behind, multiplying it further and thrown forwards — similar to how a jet engine functions. The multiplier technology used here induces the air and entrains it from the annular top, multiplying the air at the top and projecting a more powerful stream of smooth pure air forwards. In short, you won’t feel a gust of wind, but will find a soothing cool stream of air coming on to your face. The top is detachable and held on with two retractable plastic mechanisms that is sturdy and easy to install.

While the top is the most gorgeous looking showpiece for the appliance, the bottom is equally elegant and has the entire brains behind the performance. It contains of a low velocity fan that sucks in air from all around it (360-degrees) and blows it upwards to fill up the chamber on top. The air from the surroundings is sucked in from the tiny holes all around it. Between the fan and the exterior chassis/grille is a high-quality air purifying filter that comprises of three layers. While the first layer is a pre-filter that helps block coarse particles in the air (such as visible dust) the other two layers consist of an activated carbon filter and a HEPA filter that uses glass as the main element.

This filter is mainly responsible for blocking/filtering or capturing harmful airborne pollutants such as dust, nitrogen oxides, metals, acid and allergens that are as fine as PM 0.1 or 0.1 microns. The filter is cylindrical in shape and has places around the suction fan, and is additionally sealed on the top and bottom with an air-tight fit to ensure that unfiltered air does not enter from any gaps apart from the filter itself. The Dyson patented 360-degree Glass HEPA filter contains 1.1m square metres of constructed microfibers and are been pleated over 200 times to help remove 99.95 of allergens and pollutants as small as 0.1 microns from the air. The layer of activated carbon granules traps odours and toxins like paint fumes inside the filter.

The internal fan is a DC motor and spins slower than most fans found in conventional air purifiers. What we mean is that the fan has a lower velocity than usual because if the fans were to spin at higher speeds, there would be higher chances of the fan itself forcing the harmful particles back into the room. Combined with a low velocity fan and a 360-degree Glass HEPA filter, the air being purified here claimed to be almost 99.95 per cent pure. The air is then circulated to other parts of the room at a 90-degree angle that helps it reach the farthest corners of the room, unlike traditional air purifiers that blow pure air towards the ceiling. Air being blown further away from the purifier means that the bubble around the air purifier itself has more of the impure air to be cleaned, while clean air is circulated to where it is required most.

The bottom part of the air purifier has just a single backlit power button that also performs a few other functions such as filter reset and wireless connectivity. Above the power button is a tiny LCD display that shows a two-digit number to notify about the timer and fan speed. Lastly, a small Wi-Fi indicator LED is also available to see the connectivity status. Lastly, the rear of the device has an air sensing vent that houses a few air quality sensors, and a non-detachable power cable.

To add to the efficient spreading of clean air around the room, the Dyson air purifier also has an oscillation feature (similar to conventional table or pedestrian fans). Using the bundled IR remote controller, you can take charge of the Dyson Pure Cool Link Tower and have functions such as air speed, timer, oscillation and power, sleep and auto modes. The remote is also elegantly built, has a unique bent shape and is magnetic. The top of the fan has a small built-in magnet that allows the remote controller to be placed on it so that the user will find it easier to locate.

Installation is very simple and will take you no more than 5 minutes to assemble it and power on. Once out from the box and plastics unwrapped, the Tower is in three (or four) parts that needs assembly. It is much like assembling a lego tower — the base, filter and outer grille are packed together and pre-assembled as usual and the top simply needs to be pushed in from above. Once done, plug in and you are ready to go.

The filter is the most important part of any air purifier and is also usually the most expensive consumable. The filter usually needs to be replaced once every 3/6/12 months depending on which brand you are opting for. As for the Dyson, the three-part 360-degree Glass HEPA air filter needs to be replaced every 6 months and costs Rs 2,690. The filter change completely depends on the room conditions (dusty or clean) and the amount of time it is used and would work longer or shorter accordingly. 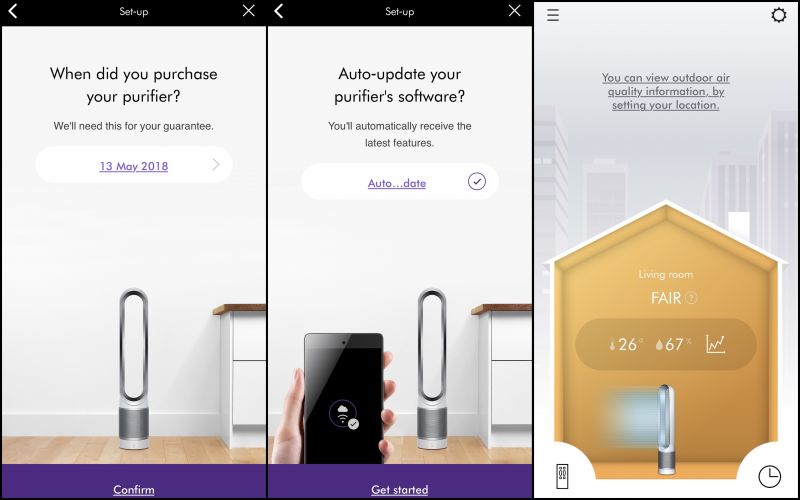 And to make things even easier, the Tower also features an app. Paired with your home’s Wi-Fi connection, the app can control almost everything that the remote does, apart from additionally giving you information about live quality of air indoors and outdoors, and log data over time. You can also control the device from the internet and also schedule or automate the air purifier to function before you enter your home. The Dyson Link app runs on both Android and iOS platforms and can give you detailed reports on your air purifier’s activity and air purification and quality history. 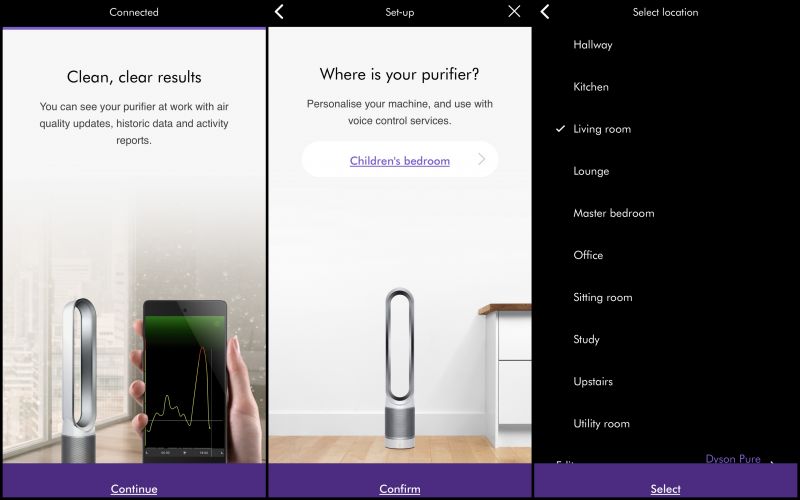 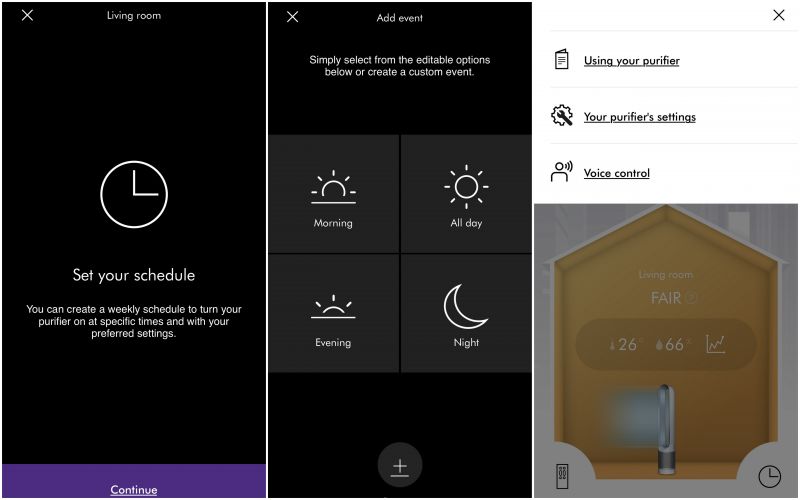 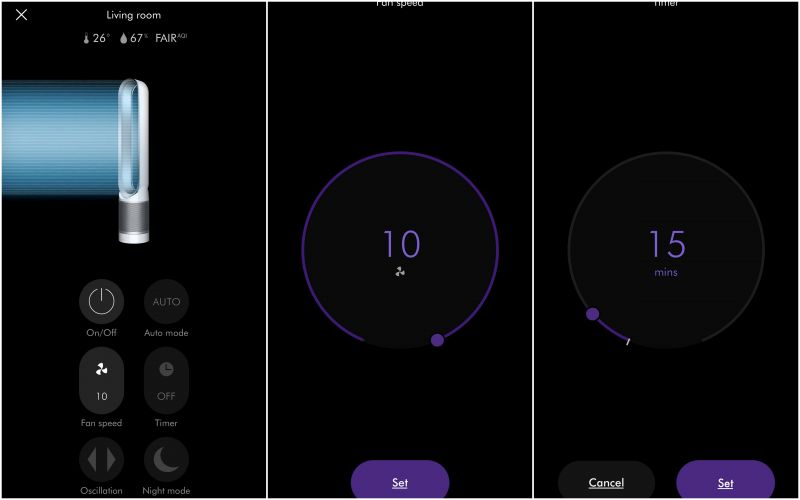 As for the performance, we are unable to state whether the air purifier is doing its job efficiently and/or at a faster rate. One has to depend on the air purifier’s internal sensor and the app to be informed about the air quality readings. Having an air quality monitor in placed different areas of the room or house would give you a much better idea on which part of the house is being taken care of faster than the other. Given that as a comparison with conventional top-blowing air purifiers, the Dyson is sure to have a better effect because of its longer air throw across the room, which means lower possibilities of a clean air bubble around the air purifier itself. The 360-degree intake also will ensure that impure air is sucked in from all sides, unlike conventional purifiers that only take in air from the front or sides.

To sum it all up, the Dyson Pure Cool Link air purifier seems like a great investment is you are looking for a combination of style and performance in a single unit. The elegant looks will definitely not force you to hide it from guests and the 90-degree air multiplier technology with the patented 360-degree Glass HEPA filter will ensure that you have cleaner air access further across the room. With a built-in internet connected and app-driven operation, silent operating and elegant looks, the Dyson air purifier gets big thumbs up from our end. However, the asking price of a whopping Rs 39,900 makes this out of reach for the common man. The product seems like a target to the upper-middle class to elite families who could afford it. The Dyson Pure Cool Link air purifier comes in two colour variants — White/Silver and Iron/Blue and is supported by a two-year warranty period.