Asus ROG Zephyrus G Review: For the gamer on the move

The ROG Zephyrus G is a perfect blend of two worlds, where neat gaming specs meet a slim design and handy portability. 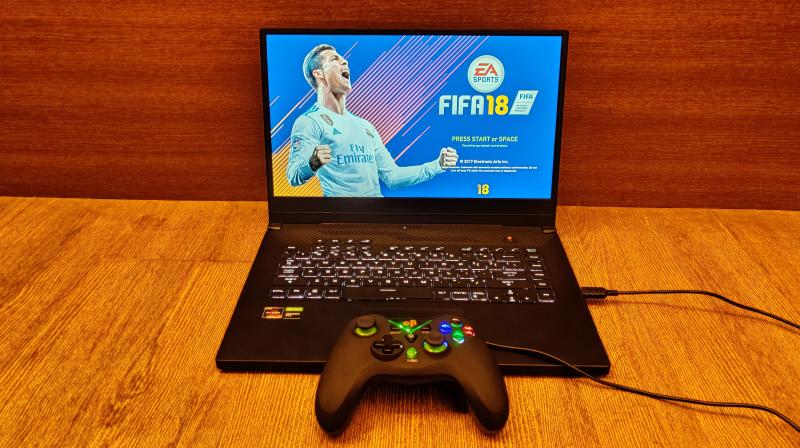 This 15.6-inch gaming laptop packs everything it has in a very compact setup with sleek yet sharp edges and rounded-off corners.
Rating:

The dedicated Asus ROG gaming line up is known for its value-for-money offerings in price-sensitive markets like India. The brand has dished out a lot of gaming machines across several price segments. Its gaming towers are very powerful, and so are the laptops. But the Asus ROG series of machines all have one element in common — a bulky form factor that incorporates the powerful motherboard, bigger batteries and cooling systems. This is true for almost all gaming machines. But what if ROG was to incorporate their portable design engineering from the ultra-compact Zenbook series into a powerful ROG machine? Wouldn’t that just be great for the gamer on the move?

Enter the Asus ROG Zephyrus series—The perfect blend of both worlds where neat gaming specs meet a slim design and portability, elements usually not found gaming devices. We review the Asus ROG Zephyrus G (Model GA502D) today and while this mean machine already looks promising on paper, we will proceed to take it for a spin regardless. Here are our thoughts:

Perhaps the most immediately striking element of the ROG Zephyrus G is the design and the size of the laptop. This 15.6-inch gaming laptop packs everything it has in a very compact setup with sleek yet sharp edges and rounded-off corners. The design is a refreshing shift from the big bulky bodies we are used to seeing on gaming machines. The machine weighs about 2.1 Kgs and for a gaming laptop, that’s actually significantly light. The laptop’s dimensions aren’t too big on any end either. In fact, the machine looks like any other 15.6-inch laptop from afar. The fact that it packs gaming specs and cooling under the misleading hood, is just icing on the cake, and perhaps the Zephyrus G’s greatest feature. 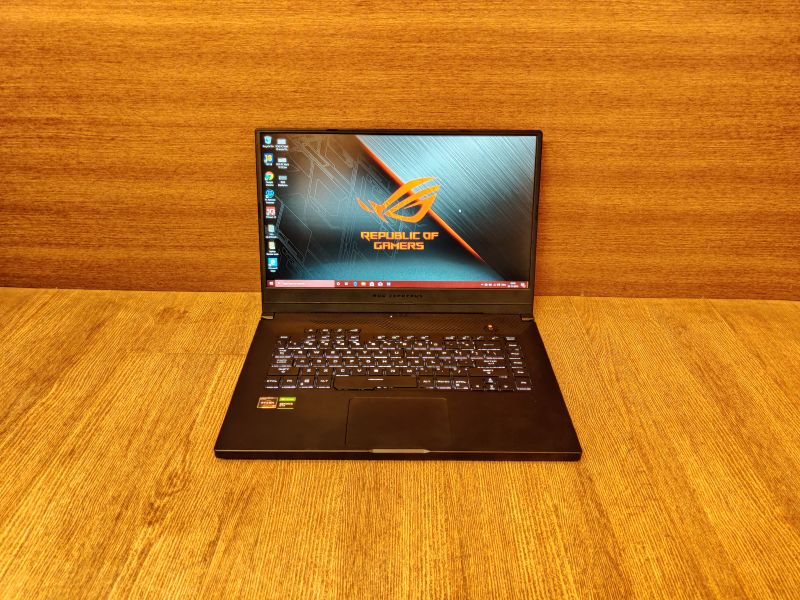 The laptop features the charging slot, a LAN port, an HDMI port, A USB 3.1 slot, a USB-C slot and a 3.5mm headphone jack on the left. The right edge features two more regular USB slots next to the heat sink. Note that despite not being a compact notebook the Zephyrus G doesn’t have an optical disc drive. The status-indicating LEDs go way up above the keyboard instead of being on the edges. This allows you to have an eye on them during gaming sessions without having to lean on the side.

The design language of the machine carries a simple geometric pattern throughout the laptop, both inside and outside. The display panel has slim bezels except for the thick bottom bezel which houses the microphone array along with the ‘ROG Zephyrus’ branding Everything comes with a custom design, from the keyboard to the power button. A fan outlet shaped like a horizontal lightning bolt above the keyboard completes the design. 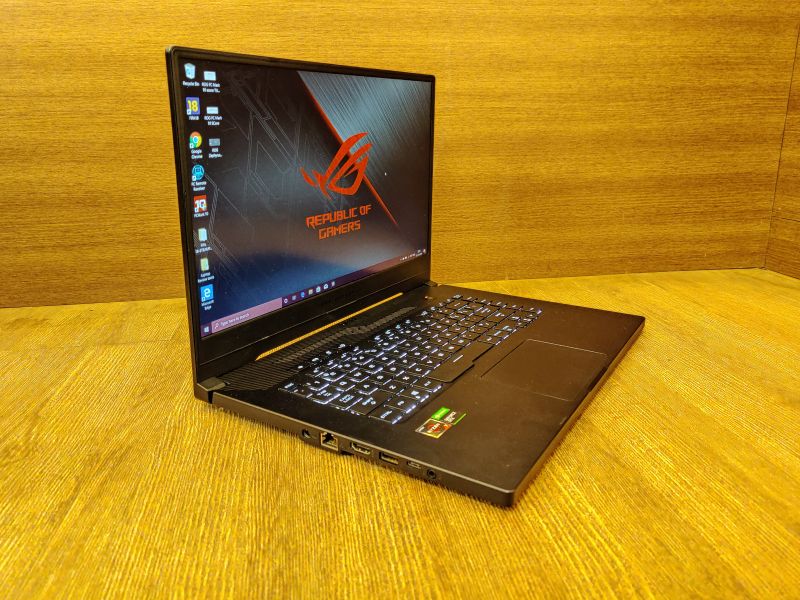 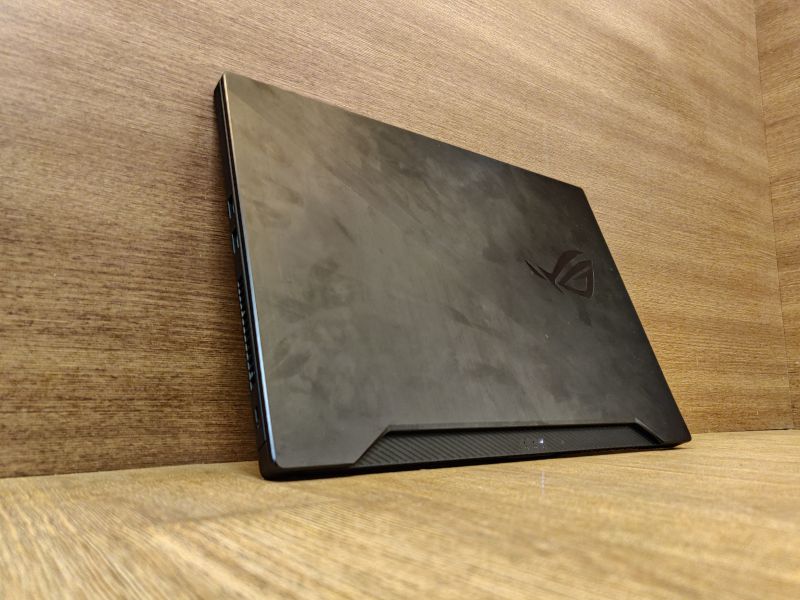 The Asus ROG Zephyrus G looks great but the outer shell can be a big-time smudge-magnet. (Top-right picture)

The Zephyrus G also has solid build quality. There are no cheap-looking parts and all buttons are solid where they are. Hardcore gaming can be confidently executed on the keyboard which can likely take more beating when you mash on the buttons than your PUBG squad that just died.

The 15.6-inch ROG Zephyrus display features a 1920x1080 panel with 120Hz refresh rate. We expected nothing short of this on a gaming machine and this one didn’t fail to deliver. Anti-Glare tech on the screen ensures you don’t seriously damage your eyes when they are glued to the screen in intense gaming scenarios. The display features vibrant colours and great viewing angles. It can even get decently bright when you need it to, and the higher refresh rate means you see everything butter-smooth and don’t miss out on frames during gaming. 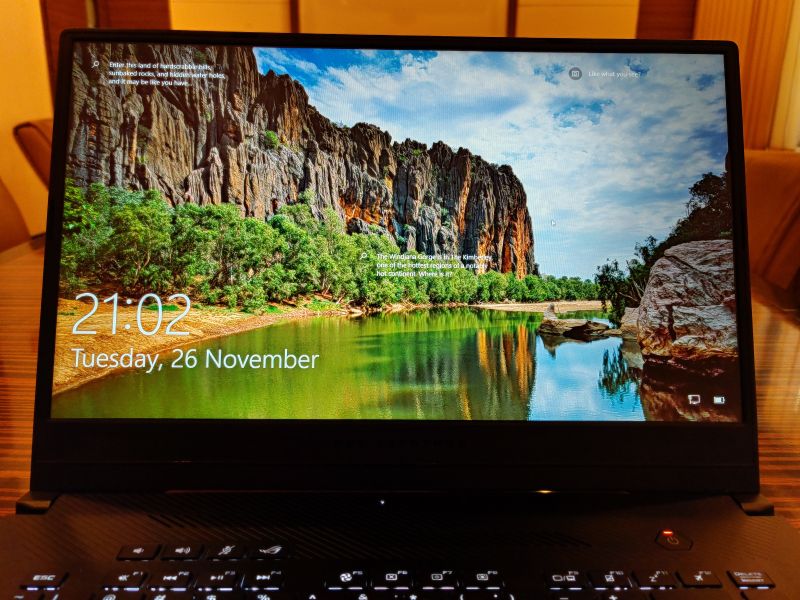 The bezels on the top and sides are very thin at just 6.2mm. This helps give the screen an 81 per cent screen-to-body ratio and makes the experience more immersive. A small rectangular perimeter runs around the entire screen that protrudes very slightly. This ensures that when you fold your laptop, the screen doesn’t touch the keyboard, leaving dirt marks on the display when you open them next.

The Asus Zephyrus G features a unique styling to the keyboard. The layout is also different from a standard keyboard that you are probably used to if you’re using a gaming laptop for the first time. There are no Numpad keys and the Home, Page Up, Page Down, End and an extra Fn key are placed in a separate vertical row on the right. The Print Screen button makes its way between the right Alt and Ctrl keys. 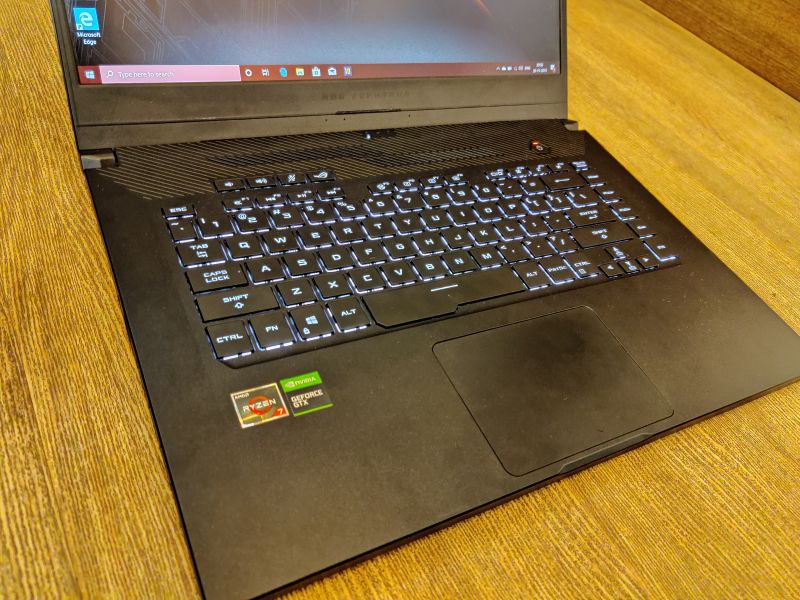 Keys that you probably will need more often during gaming sessions now have dedicated buttons instead of sharing space with one of the Fn buttons. These include the volume toggles, a dedicated Armoury Crate button and a microphone toggle button. The Function keys are separated into groups of four and feature shared controls for quick access to media controls, fan speed, brightness, Airplane mode and more. Even the spacebar has a unique shape that makes it thicker and easily accessible without looking.  The ‘W’ key has a small protruded dot on top of it to help you easily locate it averting your eyes from the screen. 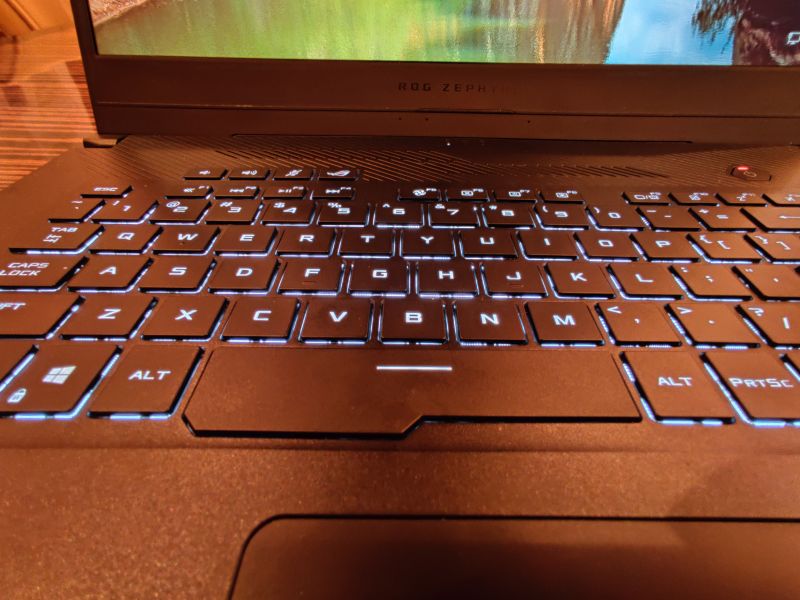 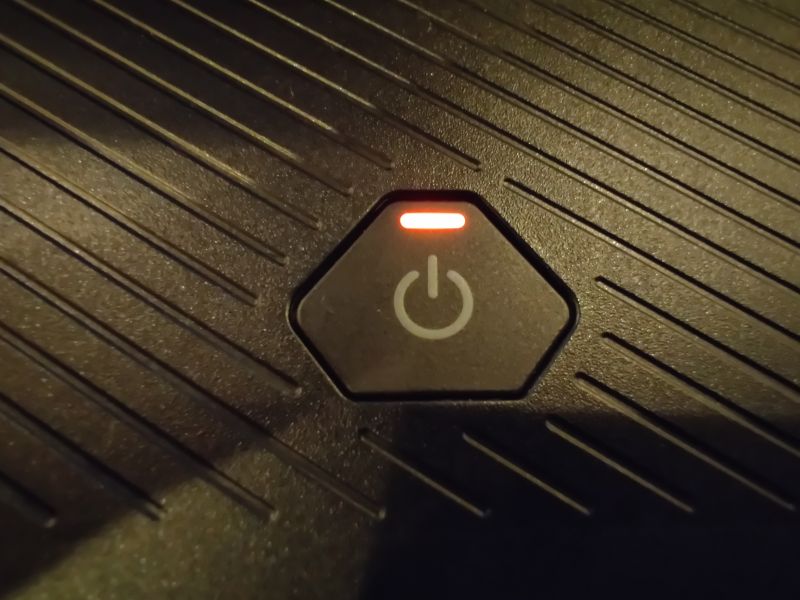 The Asus ROG Zephyrus G maintains its design language even across the smallest elements of the keyboard.

The keyboard has surprisingly small Arrow keys, which made no sense, as just like the ‘WASD’ layout, the arrow keys are pretty standard layout buttons for movement in most games, and hence very important. Their small size makes them a little difficult to use if you have big hands, which is frustrating because you will end up stroking the wrong key now and then.

The keyboard also comes with three levels of backlighting. This can be quickly and easily changed by hitting Fn+ either the Up or Down Arrow keys. The backlight here is very useful in dark environments. However, it is only a standard white light and not the RGB lighting you see on pricier offerings. 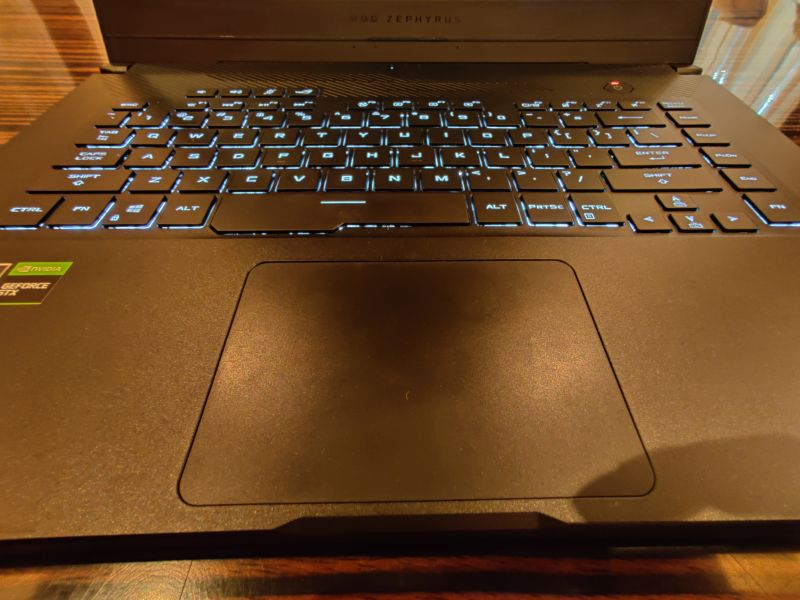 The touchpad features a minimal design with no separate buttons for the left and right click buttons. Instead, you can click on the lower half of the touchpad on the left or right side to emulate the corresponding click.

The Asus ROG Zephyrus G is powered by an AMD Ryzen 7 that clocks at 3750Hz and has 16GB DDR4 RAM. The graphics are taken care of by an NVIDIA GeForce GTX 1660 Ti GPU which give the machine 6GB GDDR6 RAM. There is 512GB of SSD storage too. These add up to give the laptop a lot of power for some hardcore gaming. The ROG Zephyrus tears through graphic intensive titles like FIFA 18 with ease, even at maxed-out settings. Everything is super smooth with no lags or frame drops. 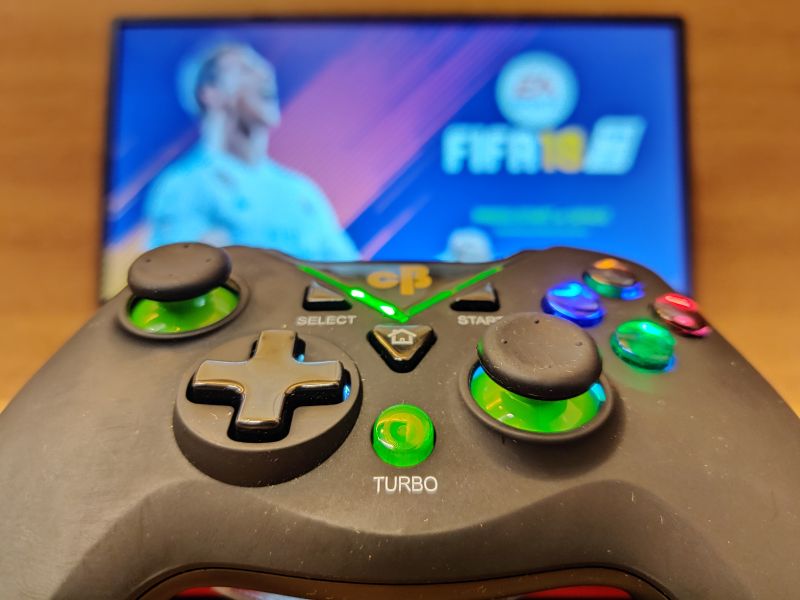 The Arrow Keys on the Asus ROG Zephyrus G are a little disappointing, but with a gaming controller, the machine is a beast.

The performance is also carried over to the non-gaming aspects of the laptop. Booting and loading times for all programmes are very small. Even the animations of tiny tasks like opening and closing of dialogue boxes and windows have a swift feel to them.

Asus ROG’s signature Armoury Crate feature offers quick access to settings that will determine how your machine performs in various scenarios. A dedicated button on the keyboard makes the settings here easy to change even on the fly. Though the interface might seem a bit overwhelming and takes some getting used to, it does prove convenient. Armoury Crate lets you specify various performance modes and other settings manually, but it also lets you set automated profiles to be activated when certain programs are run. So you can set the Laptop to run on ‘Turbo’ mode for something like Grand Theft Auto V, and ‘Performance’ mode for games with slightly lower requirements like FIFA 18. Do note that ‘Performance’ and ‘Turbo’ modes will be automatically disabled if you are not plugged in. 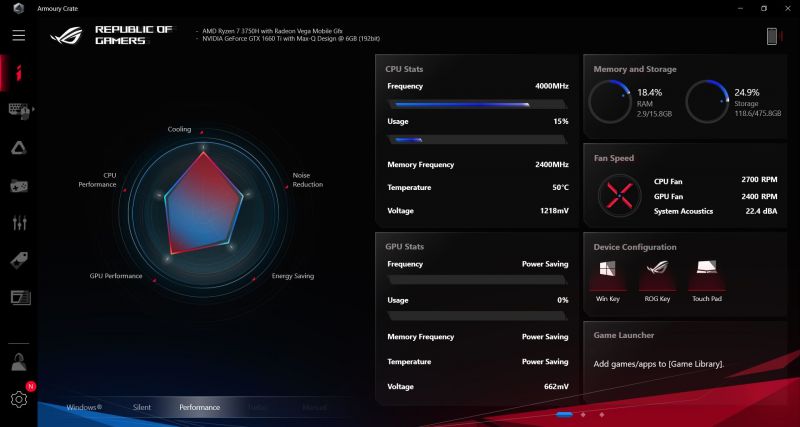 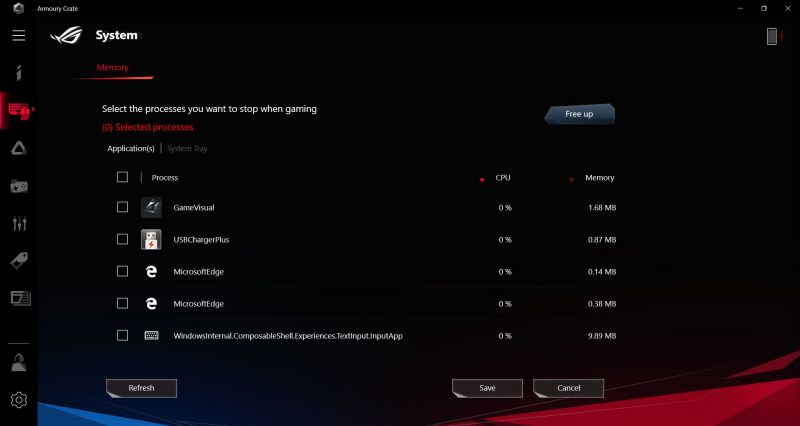 The Armoury Crate will also always show you useful information like the system’s temperature and the CPU and GPU fan RPMs.

The laptop’s performance abilities are pretty clearly depicted in the benchmark scores as well. Also, check out the difference in benchmarks when the laptop is in the Performance Mode vs in the amazingly fast Turbo Mode. 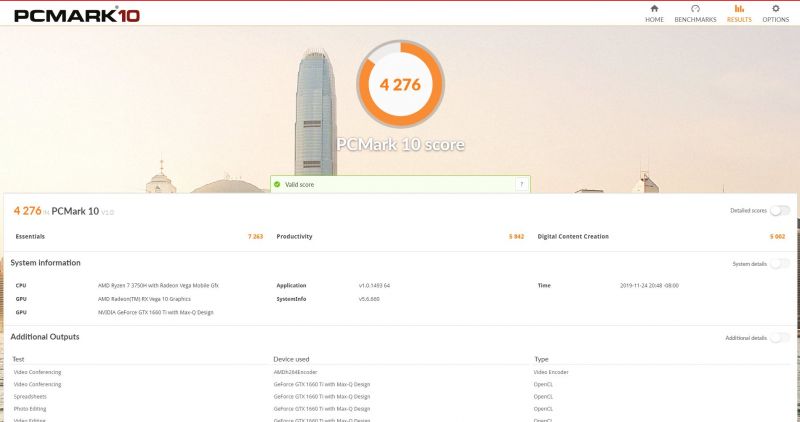 Though not a factor that will often concern you as a gamer, the battery life of the ROG Zephyrus is pretty good. However, the more intensively you game at a stretch, the faster you lose battery. So a full charge will let you play FIFA 18 at maxed-out settings (including Turbo mode turned on) non-stop for about two hours. When everything is not maxed out and you aren’t trying to kill the battery deliberately, the company claims that the machine can last for 7 hours.

The ROG Zephyrus G is a great device that targets a segment not crowded with a lot of options. The laptop is a no-nonsense gaming machine that can take on even heavy challenges easily. 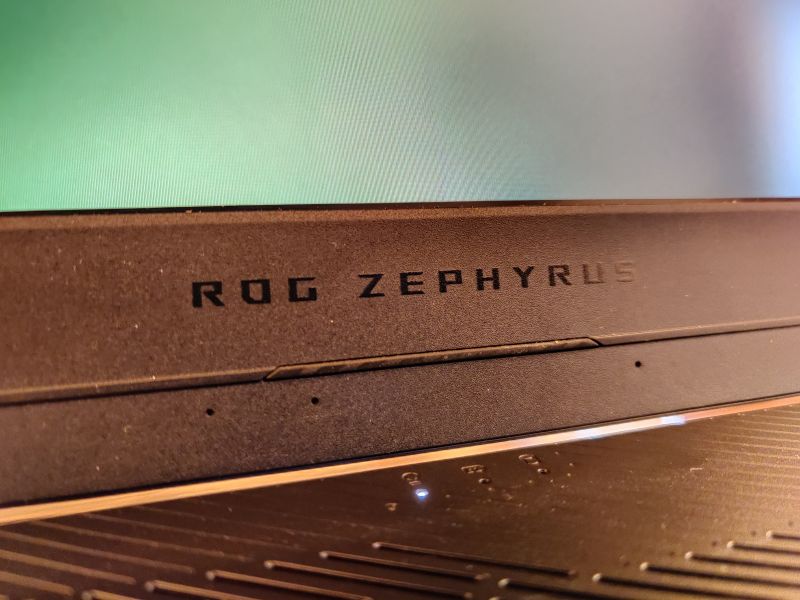 Apart from the small arrow keys, we didn’t think Asus took a single wrong step with the ROG Zephyrus G. Selling at Rs 82,990, the laptop is a must-have if you’re a gamer who wants sleek looks and the ever-important touch of portability on your machine.