This is a wonderful, all-in-one solution that not only offers a wide footprint; but also has features for the budget conscious consumer. 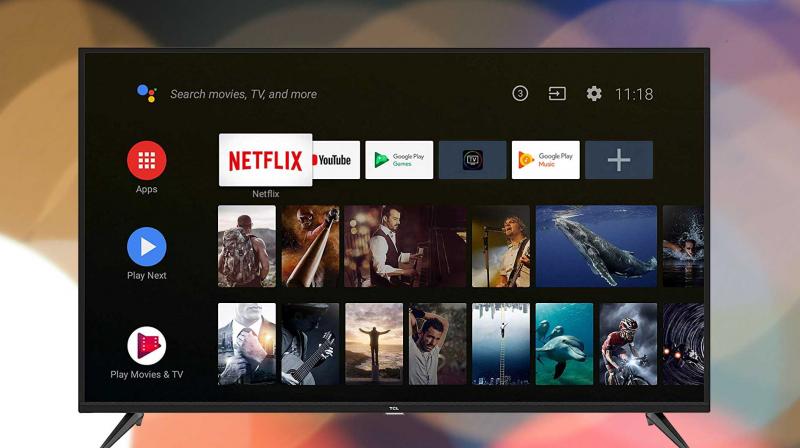 The TCL 55P8 is built to perfection and it comes with an all-black frame.
Rating:

With the festival of Diwali officially upon us, several brands are unveiling their products to entice users to upgrade from their older products. During this festival, household consumer goods are one of the highest selling products and it’s rightfully so. While smartphones dominate the tech headlines with their incredible discounts throughout the year; products like televisions tend to shine during the festive season.

Recognizing the need of the hour, TCL, the global top 2 TV brand has recently unveiled its range of smart TVs. The latest line-up of smart televisions that fall under the P8 Series has a lot going for them. These models aren’t just smart, they also come loaded with some incredible technological marvels like being 4K UHD capable with HDR panels, a full-fledged Android TV, Google Assistant, micro dimming, Bluetooth 5.0 and much, much more. What’s all the more amazing is that this line-up also comes with an astonishing starting price of Rs 23,990. How TCL managed to achieve this feat is incomprehensible; but they have and this is a major boon for you, the consumer.

We spent a few days with the 55-inch 4K UHD Android 55P8 Android TV, and here, we break down why this model is worth your cash. 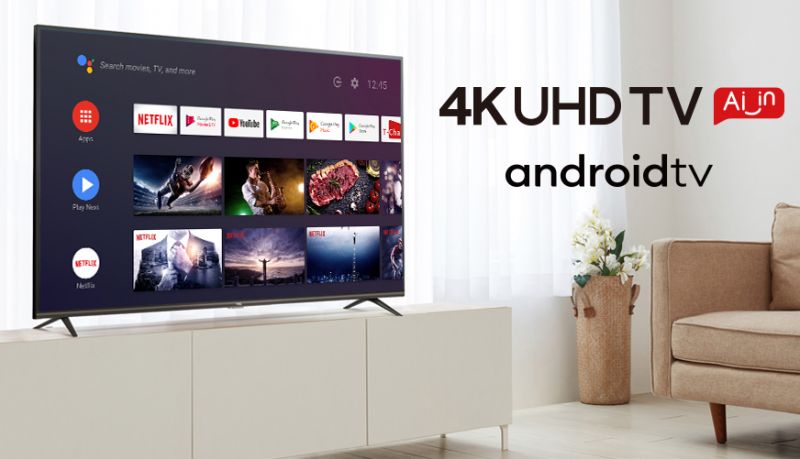 Gone are the days when budget television models would sport unsightly, horrendously large bezels. Now, several manufacturers with TCL leading the way are offering stylish televisions at prices that are just mind-blowing. This 55-inch TV is being sold at an incredibly competitive price tag of Rs 31,900. Yes, you read that right! This 55-inch television with smart capabilities and a 4K UHD panel is priced similarly with smartphones that don’t even fall in the premium segment.

The TCL 55P8 is built to perfection and it comes with an all-black frame with the bottom bezel having a textured finish. While the bezels aren’t the slimmest out there, they are not the thickest and TCL has dubbed this design as the ART Slim Design. The bezels appear to be made of high-quality plastic which helps with the overall aesthetic that the brand is going for. Not only does it add to its appeal, but it also reduces the overall weight of the television which is roughly 12Kgs. 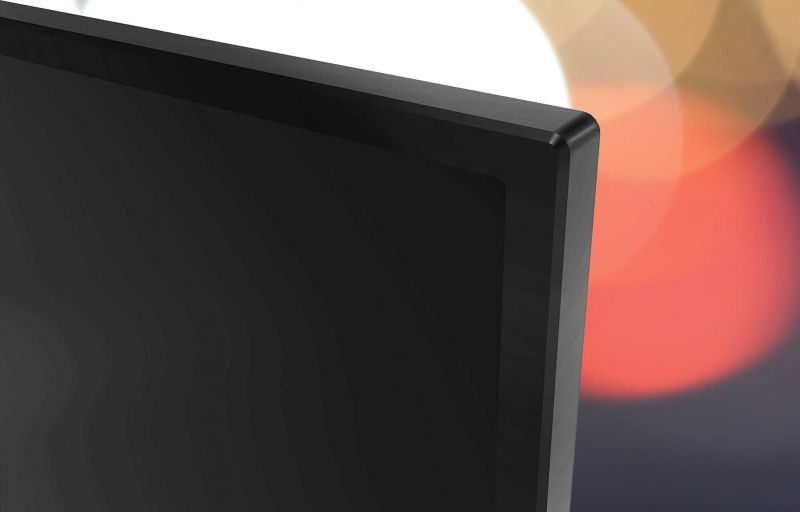 The rear is fitted with a metal panel which feels industrial and here is where all the magic lies. Connectivity options are not that extensive, but they have all the necessary ports one requires for a home theatre setup. Thankfully, all ports are side facing which means that you can easily wall-mount the TV without having to take it down every single time you want to pair a device with it. Elaborating on the design of the 55P8, you get a pair of metal feet that can be screwed on to the base of the TV. In the review unit we received, we noticed that there was a screw short; so make sure you double check this as soon as you unbox your brand new television.

Being one of the flagship products from the brand, the 55P8 is pretty slim at the sides and this adds to its overall appeal. As mentioned earlier, the connectivity options are side facing and these include three HDMI ports, two full-sized USB ports, a LAN port, one antennae input, one optical port, a 3.5mm audio jack and an AV input. Additionally, the brand has added two 8W speakers at the bottom.

For connectivity, the 55P8 comes with 2.4GHz Wi-Fi 802.11 b/g/n 2T2R connectivity as well as can be used with an Ethernet cable. Also, the television comes with Bluetooth 5.0 support which is pretty impressive for this budget offering. 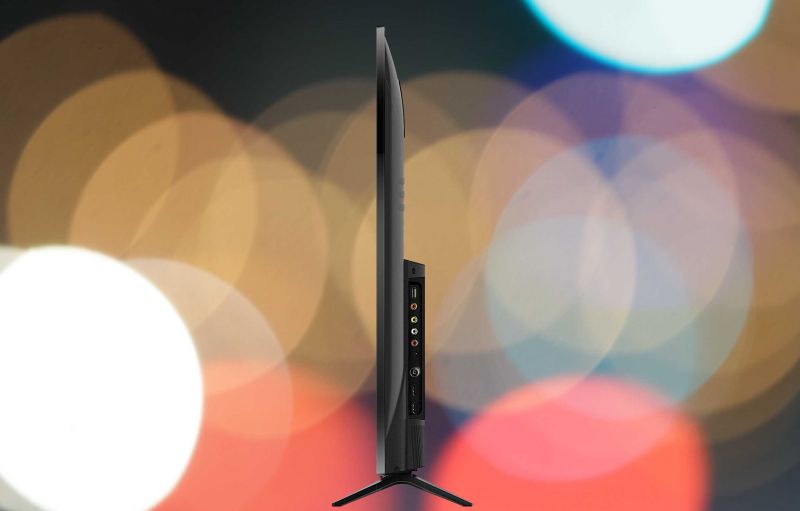 To say the TCL 55P8 is feature-laden is an absolute understatement. It has practically most of the features found in televisions that cost up to three times the amount. To start off, this model, like every other television in the P8 Series comes with AI Voice Interaction. This means that even if you buy the 43-inch model, you are still getting all the features found in the 55-inch and 65-inch televisions.

With AI Voice Interaction, all you need to do is speak into the microphone of the remote to access any sort of content you desire. That’s not all, with this feature; you can connect and control other devices in your home that’s compatible with this feature. Some of the tasks include asking questions, organizing your calendar, planning a trip and more. 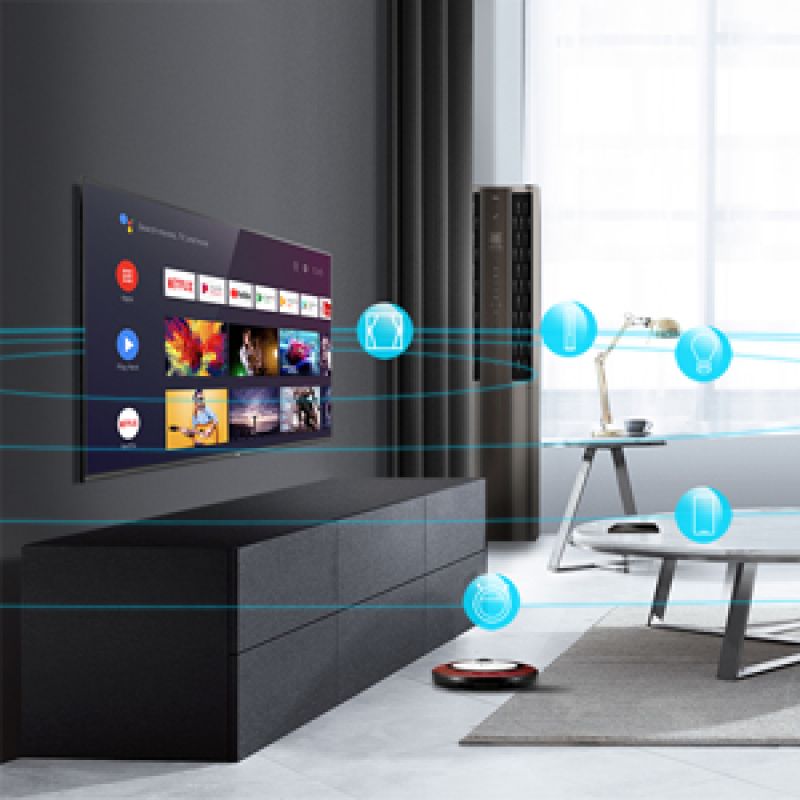 The AI features don’t end there; it also comes with an AI Picture Engine that intelligently recognizes each scene content through an AI algorithm which helps with dynamically improving the brightness, contrast and colour saturation of the picture. This helps in providing you with more details, realistic and vivid viewing experience. The TCL 55P8 also comes with an AI Sound Engine which compensates the audio quality dynamically based on the volume, improves the distortion of signals and speakers. This helps with offering you the most ideal listening experience at whatever the volume you are on.

By using an HDR 10 display, you get a lot more detail in images and accurate reproduction of bright and dark hues. Another neat feature that’s borrowed from high-end televisions is micro dimming. This analyses the picture and adjusts the brightness and darkness separately. Viewing experience is greatly enhanced with the incredible contrast ratio and picture quality on offer.

The television comes with Android 9 Pie and it provides you access to the Google Play Store, YouTube and other apps. 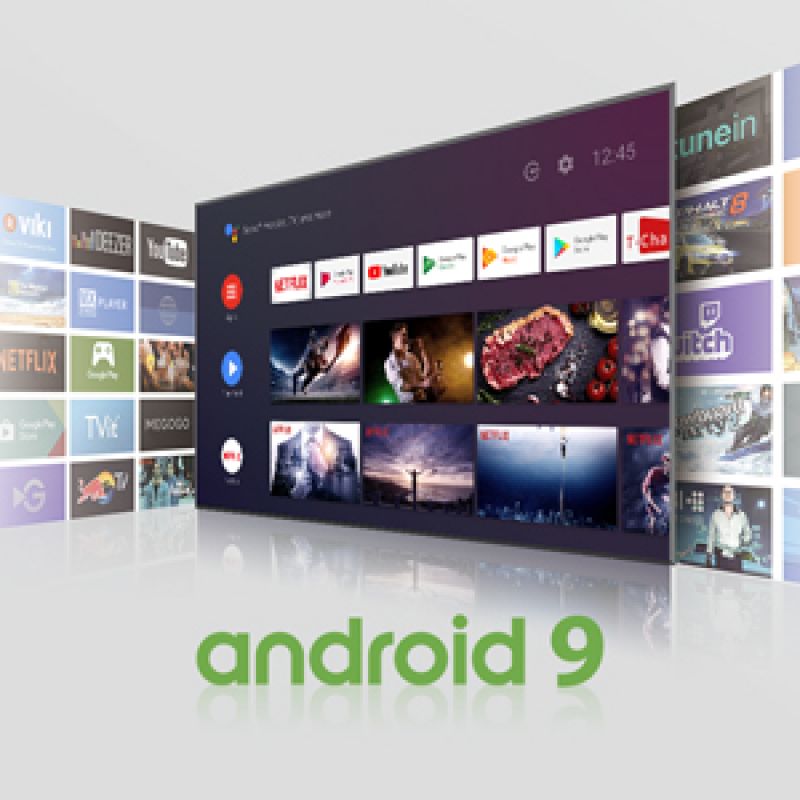 Being an officially certified Android TV, you have access to a world of Google entertainment, including console-style Android games on Android Gaming. Netflix, YouTube and more are available on TCL Android TV. TCL with collaboration with its exclusive OTT partners gives you access to 950,000 + content provision, with content types ranging from movies, series, live shows, sports, music to kids and sources from major local video-on-demand players like ErosNow, ZEE5, Hotstar, Voot, Jio Cinema, Hungama Play, ALTBalaji and YuppTV.

The remote in conjunction with the television is a powerful tool as it easily allows you to access the various features. It has all the options necessary to access each and every function such as settings, apps, video and audio profiles, etc. As mentioned earlier, the TV comes with Google Assistant and the remote does a decent job of searching and accessing content. However, if you do happen to misplace your remote somewhere around the house; fret not as there is also an app called T-Cast that gives you full control of the TV. This works as long as your phone and television belong in the same Wi-Fi network.

Overall, the TCL 55P8 is one feature rich TV that definitely give its rivals a run for their money. 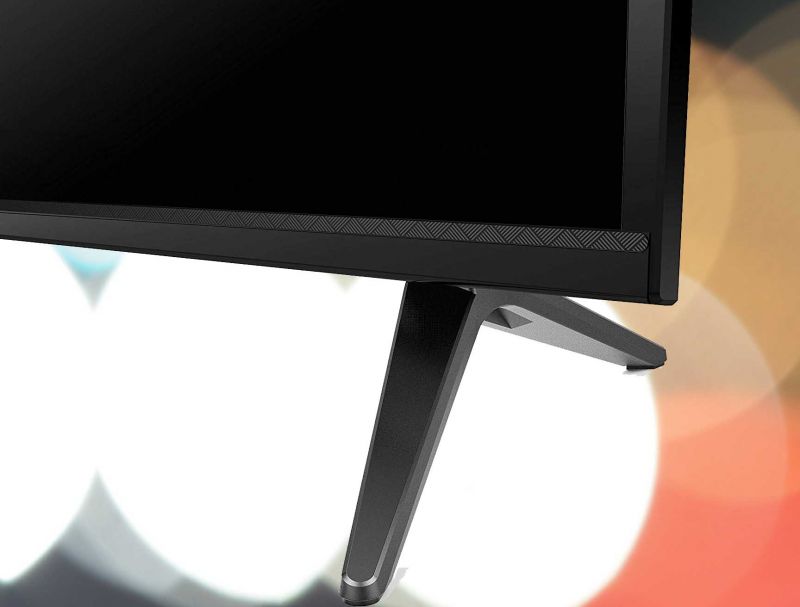 The TCL 55P8 is a 4K UHD DLED backlit panel that is HDR10 certified and has a typical brightness of 270 nits. The contrast ratio is 4500:1 and it features a resolution of 2160 x 3840 pixels. With the television priced this aggressively, TCL has spared no expense when it comes to image quality and the overall performance of the TV is rather good. To be fair, you won’t get the same performances that are seen on higher-end models with LED displays such as the LGs or Samsungs of the world, but at this price point, the performance is pretty solid.

The contrast levels and the colour reproduction are quite remarkable and this is using the television’s ‘Standard’ preset. However, if you change the preset, you may notice that some colours appear washed out. It’s best to stick with the default picture preset for this model and you will be good. One issue we observed was that at times, there was some inaccurate colour presentation while displaying gradients and this isn’t as fluid as we would have preferred. Viewing angles are decent at best and when watching content from an acute angle, colours appear a bit washed out. 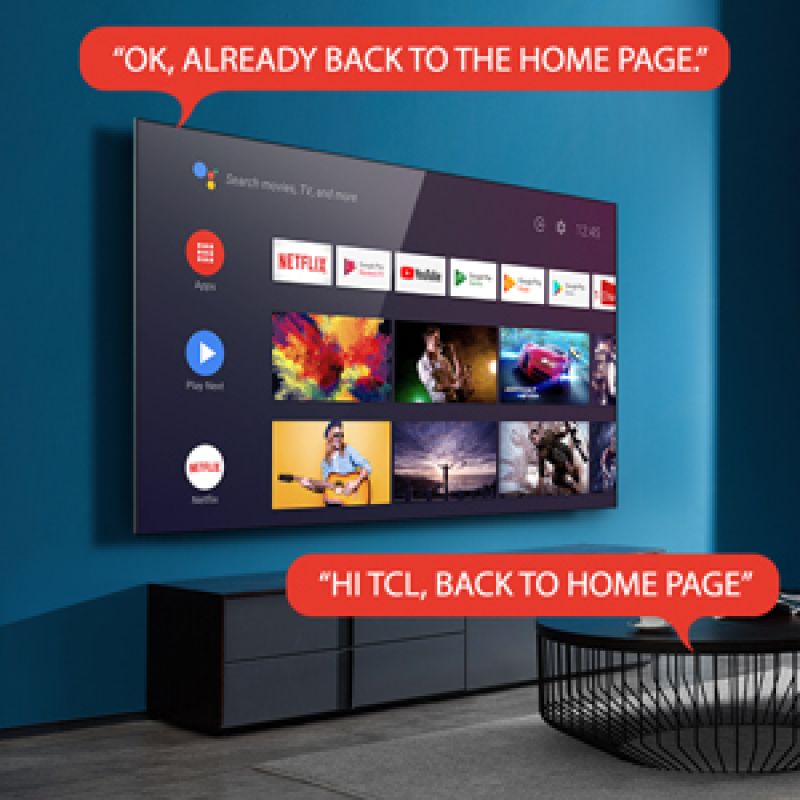 Moving on, we also noticed that there was a hint of backlight bleeding towards the corners; but not so much to disrupt your overall viewing experience. Then again, most of these issues are taken care of by the AI Picture Engine to ensure you have the best viewing experience.

Playing 4K content on this TV is pretty great with the television checking all the right boxes where it matters. To elaborate, the black levels seen here are pretty deep while the whites get substantially bright. Overall, the clarity and detail is something that captured our attention from the moment we turned it on and there is sharpness to the picture that’s seldom seen on rival models.

The speakers here are downward-firing and the volume is rather low for our liking. In order to capture detail in movies, you would have to turn the volume up a bit to get the best possible experience. This isn’t a slight at the TCL 55P8 as most televisions don’t seem to do a decent job in the sound department. To get the best performance out of the TV, you would need to purchase a Soundbar or a speaker system that can be paired along with it. 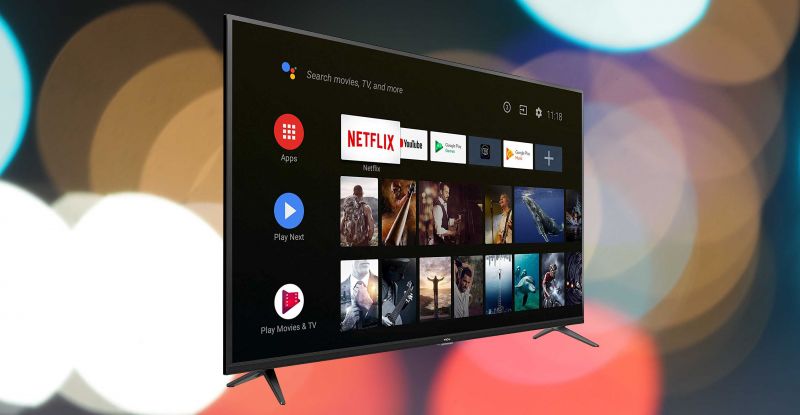 The TCL 55P8 is priced extremely competitively at Rs 31,900 and is also available with a further discount of Rs 7,020 up on exchange of an older television. There are a number of reasons why this model is an excellent option and the chief attribute is its incredible price. Essentially, when purchasing the TCL 55P8, you aren’t just paying for a television, you’re paying for a 4K UHD TV which is loaded with features such as being an Android TV that opens up a world of apps. With the television supporting all popular OTT platforms such as Netflix and Amazon, you are greeted with content that will keep you entertained for hours on end. And, with Diwali officially up on us, this is the best product you can buy for yourself or gift a loved one whether you are on a budget or not.