As storage demands explode, hard drives hold their own in the shootout with solid state. We try out the world's biggest hard disk: 14 TB 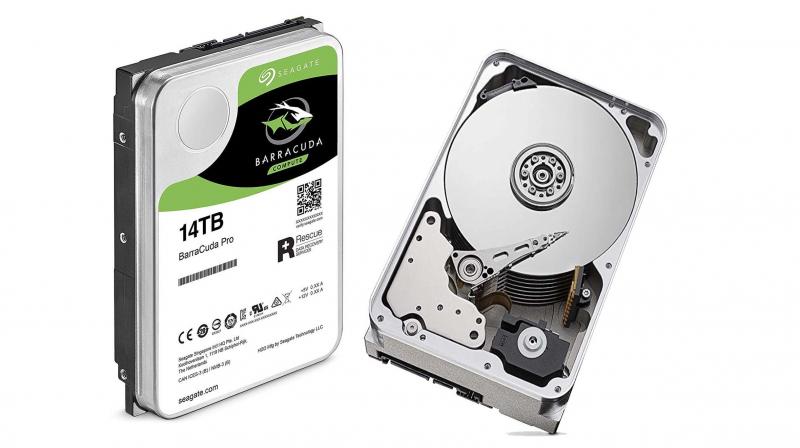 Our insatiable thirst for video, mostly movie content -- and once viewed, our very Indian habit of storing the file for repeat viewing or sharing with friends -- has created a separate and lucrative business for the data storage industry. The latest smart phones can -- between on-board memory and micro SD card -- store 1000 GB, that is, one terabyte of music or movie files. But there comes a point beyond which external devices storage accessories throw up their hands, and say: 'enough'!

Much is written about the challenge posed to the good old magnetic Hard Disk Drive (HDD), by the Solid State Disk or SSD based on Flash drive technology, the same that we find on USB memory sticks. Yes, SSDs are small, making them handy for tablets and lightweight laptops as well as being 3 -4 times faster when it comes to data transfer speeds. But GB for GB, they cost about 3 times as much as HDDs. Which is why obituaries written about HDDs and their death at the hand of solid state, are mostly wishful thinking. The Magnetic Hard Disk drive still remains the most cost-effective storage technology today, with desktop PCs their biggest market.

I recently had a chance to try out an internal hard disk drive for PCs with the largest capacity available today: 14 terabytes (TB). The model I got to try was Seagate's Barracuda Pro desktop drive. This is an 8-platter 7200 RPM device, in the 3.5inch size, with its own 256 MB cache and a top read/write speed of 250 MBPS. Hard disks of lower capacity have data transfer rates of up to 550 MBPS. As an advance on Seagate's own earlier Barracuda drives of up to 12 TB, the new HDD uses something called Two Dimensional Magnetic Recording (TDMR) which simply put, means two heads can read data from the same track, thus cutting down on noise and errors. In spite of hefty capacity, the 14 TB Barracuda consumes less than 7 watts of power. For the asking price of Rs 1,09,999 (discounted at online sites to around Rs 90,000), Seagate also throws in a data recovery service.

These are early days for HDDs storing tens of terabytes and we can expect the price for this capacity, to fall with demand, to around Rs 50,000 - Rs 60,000 which is at the right point, cost-per-GB-wise, for hard drives. Right now, the good news is: if you do need such insanely large storage, and are prepared to pay, it's out there for you.