The ET300 feature Bluetooth 4.1 with IPX5 water and dust ressitance and gives you 2.5 hours of palyback time. 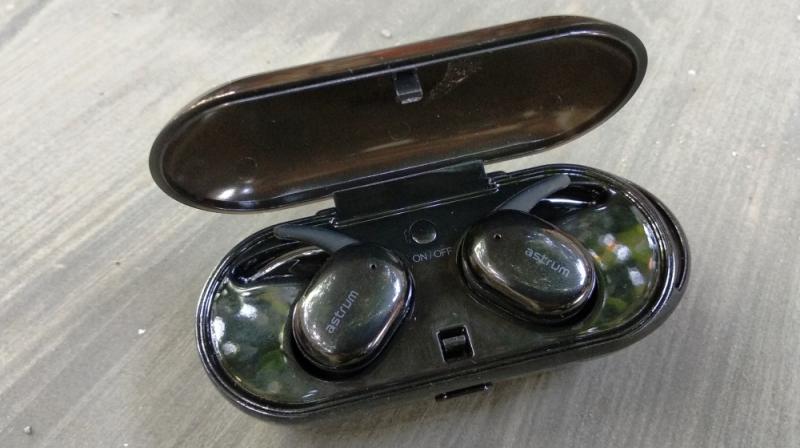 The Astrum ET300 Wireless Earbuds feature 8mm drivers with 32Ohms impedance. Astrum claims that each ear can spew out a frequency range of 20Hz-20KHz and an audio output of 105dB.
Rating:

Wireless and Bluetooth – the most obligatory and gravitating terms required for any decent headphones in the market currently. The resonance of wireless headphones are the trend now, and all thanks to Apple’s Airpods which are the supposed to be the most popular wireless earbuds in the lot. The desire to make the earphones/earbuds wireless is so substantial that every major company wants to make their own pair of these earbuds and make a mark for themselves. 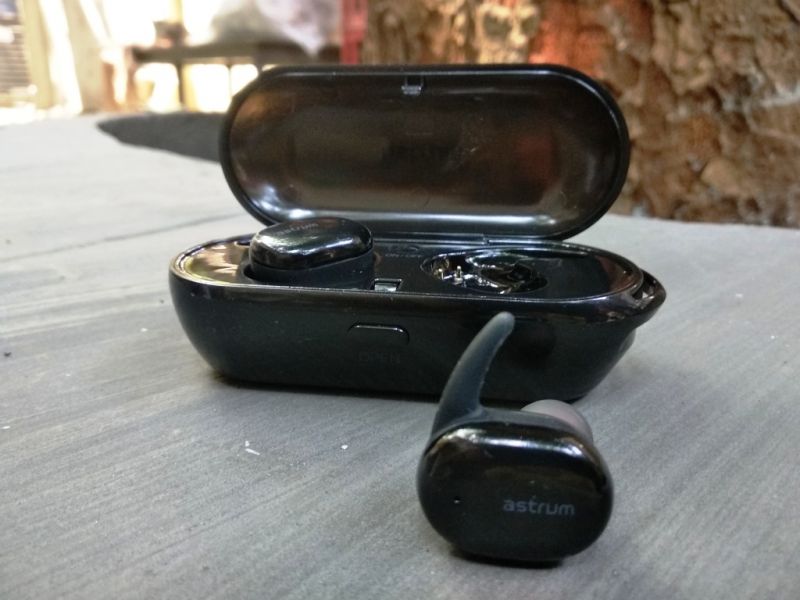 Firstly, every smart product/accessory associated with the smart tech comes with a hefty price including all the sophisticated features. A few others tend to cover all those features to a larger extent and can still put on an affordable price tag on their products. And, smart accessories maker Astrum chose the latter option to make affordable Bluetooth wireless earphones with the ET300. The Astrum Bluetooth earbuds come with a little 'charging dock station' that also doubles as a carry case — inspired by Airpods. They are IPX5 rated water and dust resistant and carry a touch-based control for audio control.

ET300 earbuds do look like some standard earbuds with a slightly bulky form factor. This bulk is a reason for a circuit and battery sandwich within each bud. The buds are a bit larger than standard, and makes you aware of the earphones in each ear, unlike conventional in-ear earphones that are light and small.

The Earbuds includes weatherproof rubber ear hooks, which latches on to your ear's to prevent it from falling off on the go or during a workout session. As mentioned earlier, the earbuds do come with a charging dock station that doubles up as a case. However, the build quality of the dock/case lacks the quality feel as it is made of normal, but highly glossy plastic. Nevertheless, it does a fair job in protecting the earbuds when carried around and also charges it simultaneously to ensure you never run out of juice when you need it.

Despite the looks, the case is pretty small and weighs just 50g with the earbuds in it, which makes them super comfy to carry around. The dock features two slots with magnetic pogo pins where the earbuds rest and be locked when not in use.

Since the wireless ear buds are completely touch-based (no physical buttons), both the ear buds feature simple single-touch interface along with an LED indicator each. The dock features LED indicators too for the onboard battery status and hosts an on/off button to charge the earbuds. The battery status LED indicators on the dock only indicates the status of the dock's internal battery and not of the earbuds. Also bundled is a micro USB cable for charging the dock, but doesn’t include an adapter.

The Astrum ET300 Wireless Earbuds feature 8mm drivers with 32Ohms impedance. Astrum claims that each ear can spew out a frequency range of 20Hz-20KHz and an audio output of 105dB.

As for the connectivity options, the ear buds sport Bluetooth 4.1 connectivity and can be paired individually to the phone. However, the earbuds are meant to be paired with the smartphone initially and then they take over by pairing each other automatically thereafter.

The earbuds need to be switched on to start pairing. However, switching on the buds was tricky for us initially, and so will it be for new users. Simply touch and hold each earbud's outer surface to power on and pair and you are done. 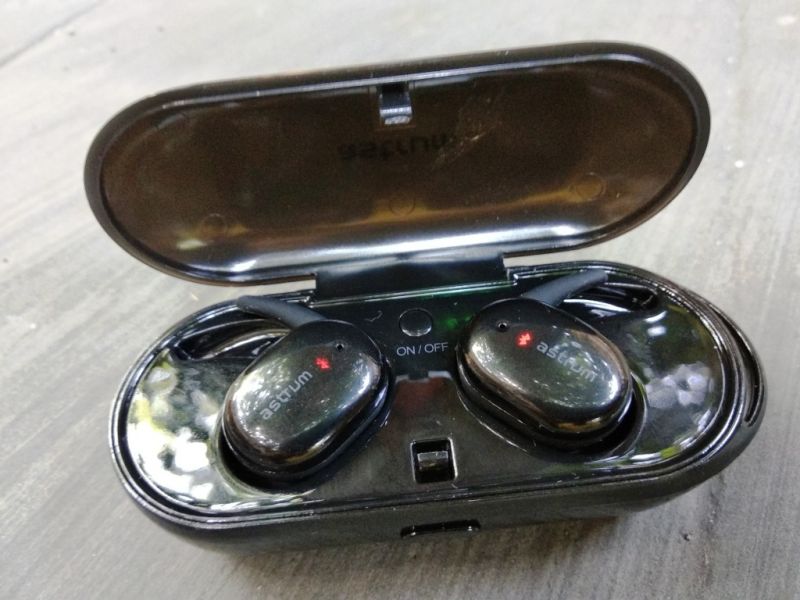 Once paired, an automated voice welcomes you and gives you the status of each earbud, while connecting and during initiating calls. The LEDs on the buds turn Red while charging in the dock and turn Blue while being paired. 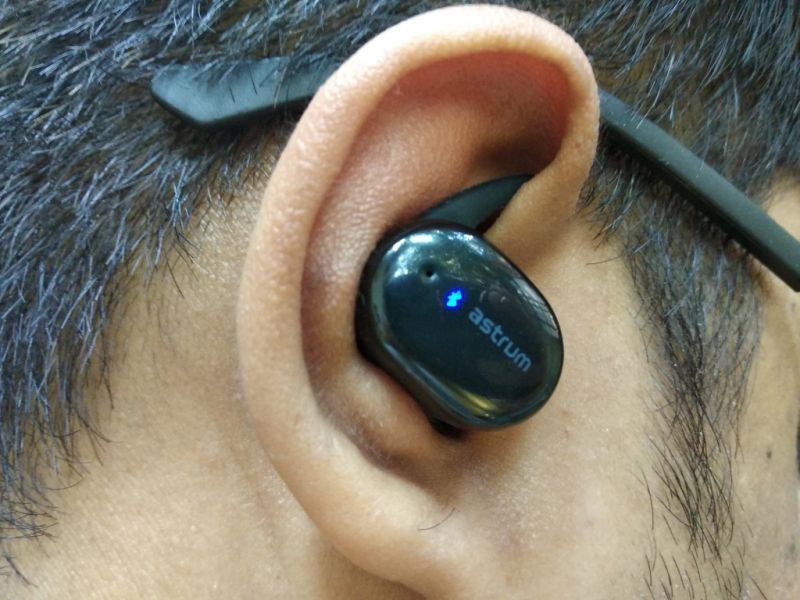 As stated earlier, the dock has an internal battery that acts as a power bank for the earbuds. This internal battery when full can provide a topup to the earbuds up to 3X times. The earbuds take around 1.5 hours to get fully charged from almost zero, using the dock. Additionally, the dock takes around 2 hours for a full charge. Do note, charging time for the dock depends on the power adapter/charger being used. We used a 1A charger.

On the performance front, the ear buds offer a music playback time of 2.5 hours and a calling time of up to 2 hours. Speaking of the calling feature, operating the touch interface for calling is easy, a single tap on any earbud can accept calls, double tapping rejects calls, and can also do redials of the last number called.

For the playback controls, a single tap is for play/pause and touch and hold for two-seconds changes tracks to next. Previous track options are not available.

Connectivity on the ear buds is good too – the company claims a range of up to 32ft (in test environments). As for our tests, we managed to get a decent range of up to a good 20ft.

The Astrum wireless earbuds does a decent job with audio performance. The ear buds are not meant for audiophiles, but can be considered for those who prefer vocal-based music rather than pounding audio. As the bass lacks the punch the lows are pretty good. We also did notice that highs weren't up to the mark, but we don't complain either.

A mixed package of audio performance also depends on the surrounding environment. These ear buds do not feature ANC (active noise cancellation). However, they do sport noise blocking as you get a noise isolation feel because of the snug silicone ear tips.

Voice calls are not as great since we faced issues with calls — on the receiving end, callers complained that they could not hear us loud enough. We could relate this with the microphone being far off from the user's mouth. 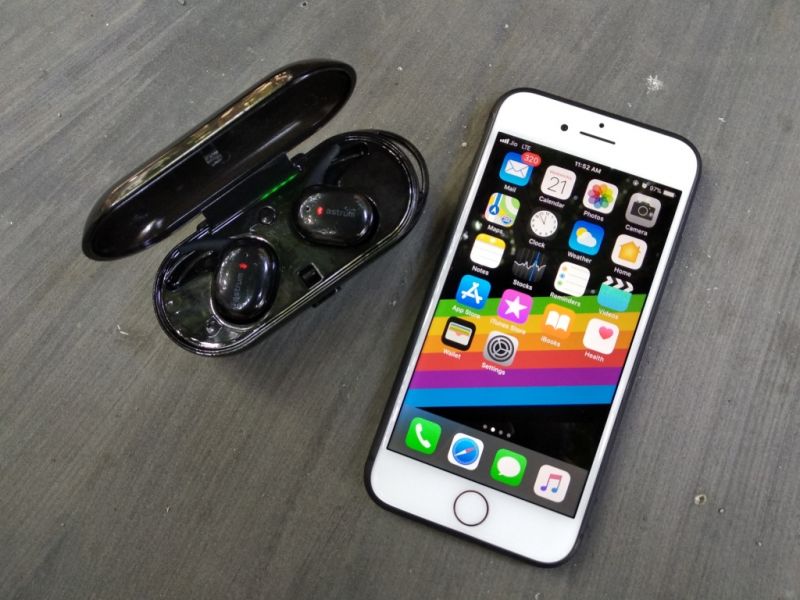 Should you opt for these? It depends. The Astrum ET300 Wireless ear buds are targeted to the users who prefer wireless accessories or earphones. Since most smartphones ahead will lack the 3.5mm audio jack, having a wireless earphone will probably be the only option. The earbuds are also beneficial for those who work out a lot (IPX5 is an added benefit to them), and can avoid tangling wires that could cause hindrance. Do note: these earbuds are are not in comparison to any high-end ear buds. Considering the features it offers, the flexibility it has and price it retails for, the Astrum ET300 can be a substantial replacement to your regular wired headphones. With a good audio quality and decent battery life, the earbuds do get a recommendation from out end. However, the price tag of Rs 4,999 may not be as light on everyone's pocket.