It comes with Intel Core i9 Extreme Edition processor and up to two NVIDIA GeForce GTX 1080Ti graphics cards. 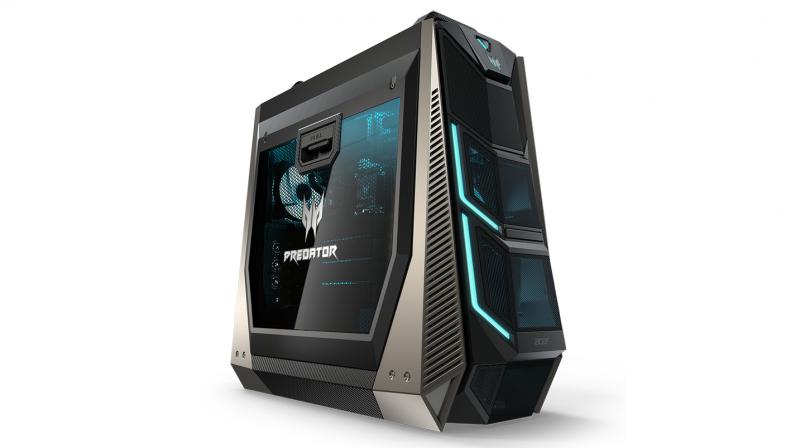 It is the first gaming desktop with Intel’s Core i9 Extreme Processor and Optane Memory to be available in India.

Acer has launched one of its most powerful gaming desktop — Predator Orion 9000, for the Indian market. The PC features an Intel Core i9 Extreme Edition processor with up to 18 cores and 36 threads and up to two NVIDIA GeForce GTX 1080Ti graphics cards, which is priced at Rs 3,19,999.

The Predator Orion 9000 can accommodate up to 128 GB DDR4 memory. Acer has provided a one-punch overclocking feature, which enables players to select turbo performance at the click of a button. The PC is equipped with an Intel Optane memory, which promises fast read and write speeds on a  massive 2TB hard disk.

As for the aesthetics, the Predator Orion 9000 series features a black-and-silver spacecraft-like exterior with customisable RGB lighting along the sides of the front bezel. The side window panel highlights the design that keeps electromagnetic interference (EMI) levels in check despite the size of the opening. Acer also offers optional fans with customisable RGB lighting.

The Predator Orion 9000 series feature liquid cooling and Acer’s IceTunnel 2.0 to keep the temperature down while the game heats up. IceTunnel 2.0 is Acer’s advanced airflow management solution that separates the system into several thermal zones, each with an individual airflow tunnel to expel heat.

On the connectivity front, the desktop includes two USB 3.1 Gen 2 ports (one Type-C and one Type-A), eight USB 3.1 Gen 1 ports (one Type-C and seven Type-A) and two USB 2.0 ports (Type-A). The Predator Orion 9000 overall supports three M.2 slots to extend the ability to increase the speed, power and capabilities of the PC, and four PCIe x16 slots provide ample expansion for video cards.