Mobile phones are all set to disrupt with new specs, design and user experience. 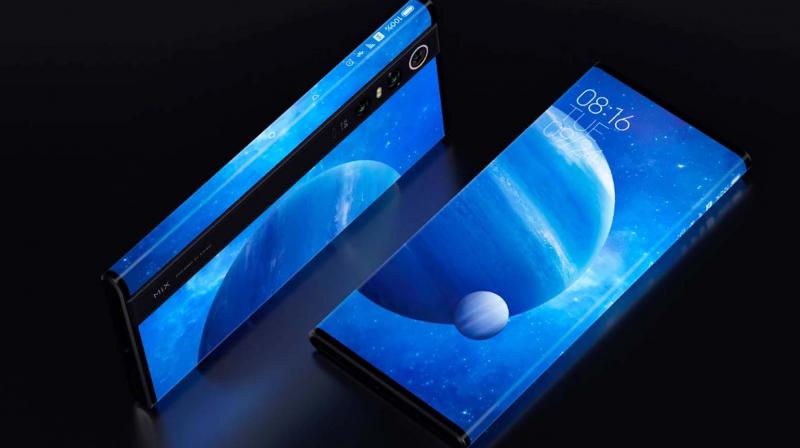 Christened Mi Mix Alpha, it is the first phone to feature a wraparound screen design, which essentially means it is an OLED screen all over.

R&D teams of leading smartphone brands have whipped their creative ideas together to come up with some serious innovations and it looks like in 2020, they will touch down with multiple products and software, that you and I can touch and feel in new ways. From wraparound screens to three-digit megapixel cameras to AI-driven User Interfaces, here are some of the way-out experiences and devices lined up for release this year

A few days back, Xiaomi revealed, its new smartphone vision: Christened Mi Mix Alpha, it is the first phone to feature a wraparound screen design, which essentially means it is an OLED screen all over. This stretches (literally) around and behind the phone, unlocking the possibility of viewing and experiencing immersive content all over the device. The Mix Alpha is the first phone in the world to feature a 108 MP camera along with supplementary cameras, driven by the Snapdragon 855 Plus processor and an exclusive 5G modem, which app developers and service providers can truly leverage to take user experience to the next level. A reference phone warrants the use of the best build materials and with this device, Xiaomi introduces titanium and ceramic, two uber expensive but strong materials to support the all-glass exterior. While the commercial feasibility of the MI Mix Alpha in its current form is still undecided, it is truly a masterpiece that reveals the possibilities for the next couple of quarters.

Incidentally, the brand also revealed that it is going to pay a lot of attention to the Mi line-up of devices that seem to have gone into hibernation. We learnt that it planned to build an integrated online + offline network riding on the Redmi line of ultra-affordable made-for-India devices before reintroducing Mi this year, as a premium line. Xiaomi has also announced that Poco, will become a third line with focus on gaming performance.

Just like the humble ceiling fan in your bedroom, the keypad of your smartphone has seen least innovation over the years. This is ironic since brands like Google thrive on user interaction and usage patterns, centred on the keys. Ankit Prasad and his team at Bobble AI are changing all that. With a vision to be present in a majority of Indian smartphones, Bobble is disrupting user experience by giving it an AI twist. In technical terms, it is tweaking the Input Method Editor (IME) , designing a keypad that understands you better, predicts your behaviour and eases your communication. For instance, it will pull up personalized stickers remembering that today is your friend's birthday. The brand has partnered with the likes of Tinder, Reebok, Zomato, ixigo and more to provide immersive shopping and interaction experiences without having to open individual apps. We used Bobble for a week and found it hard to go back to even the most intuitive of Android keyboards ,because of how it spoils you with suggestions, and syncs you up with apps, operations and activities, without leaving the messenger window or WhatsApp screen. MiUI has integrated Bobble into its upcoming smart phones. With the potential of AI and third-party app integration, Bobble could well become your de facto keypad in 2020.

Setting the tone for 2020, Oppo has just launched the F15, an all-in-one offering at an attractive price, targeted at those of us who crave a little bit of everything. The brand has also revealed how it has segmented its offerings where Reno will be a premium line, the A series will be the value line and the F series will be a mid-range all-in-one line.

The F15, with its 48 MP primary camera, the gold standard in cameras of late, supplemented by an ultra-wide angle, a portrait and macro lens, along with a 16 MP selfie camera, is powered by the MediaTek P70 processor and a 4000mAh battery, with a sleek, minimalistic design, accentuated by an FHD+ AMOLED screen with Gorilla Glass 5, and a laser light reflective back cover with the camera module cutely housed in the left top corner. What makes the F15 a true all-rounder are its AI-powered game modes like Frame Boost and Touch Boost that provide enhanced touch feedback and screen refresh for competitive gaming, along with in-game noise cancelling and voice changer. With camera performance, design and game performance taken care of, the F15, priced Rs 19,999 (8 GB + 128 GB), with bells and whistles such as an in-display fingerprint sensor, Color OS embellishments and fast charging, is a steal at its price point. Way of things to come, perhaps, where mid-range smartphones offer serious design and top specs ?