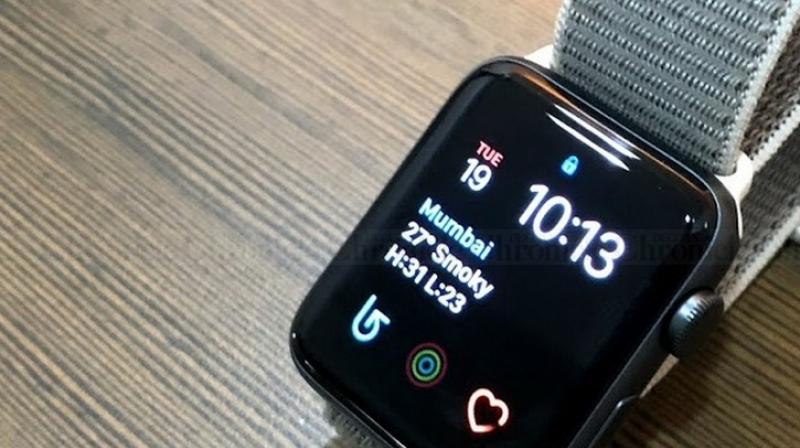 Apple has been developing electronic masterpieces for a decade and devices right from the iPhone to the iMac have been around as proof. While most are standalone devices that perform tasks designed for a particular purpose, the Watch is something that is more of an add-on, an extension to the iPhone. The Watch is the ideal buddy to an iPhone, and as a user, you would agree totally. Now that the Apple Watch is in its third-generation, it has been refined for additional power and more features. Though the new Watch is identical to the second generation in terms of design and size, it does feature some more beneficial stuff, which is worth the money it asks. 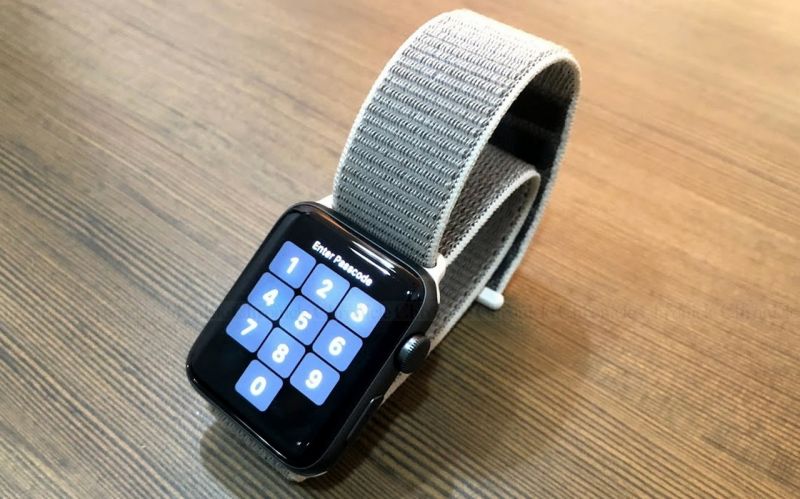 The Apple Watch retains the same design language as the prior two generations, but the interiors are completely different — more upgraded. Apple has addressed a lot of areas on this generation Watch and the new wrist smartie will definitely impress the buyer. 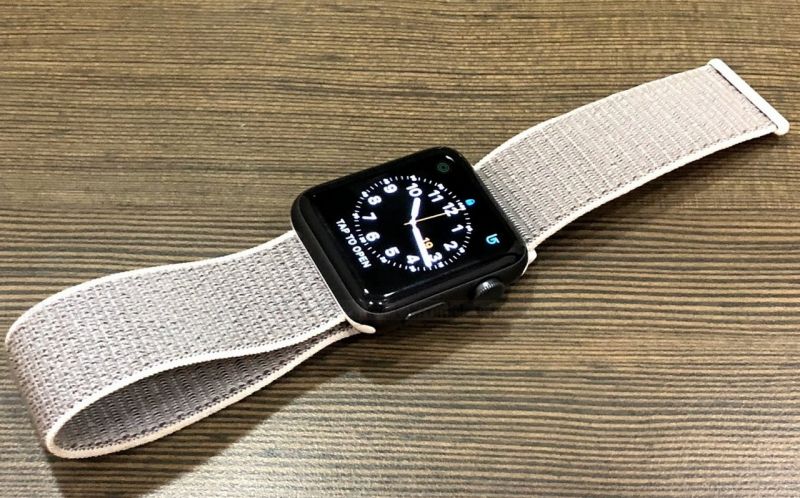 The biggest new feature entry on the Series 3 Watch is LTE. Though not yet available in India, since our beloved telecom carriers have not yet upgraded their systems to support eSIM, the new Watch LTE variant seems to be a hit abroad with claims of Apple being one of the biggest smartwatch retailer on the globe. As for India, the non-LTE variant carries the rest of the features from the international version. GPS, which was debuted in Series 2 was beneficial, but LTE makes it even better as you could simply leave back your iPhone at home when going for a run. You can also listen to music streamed directly from the iTunes store without the need of an iPhone paired in the vicinity — thanks to LTE. 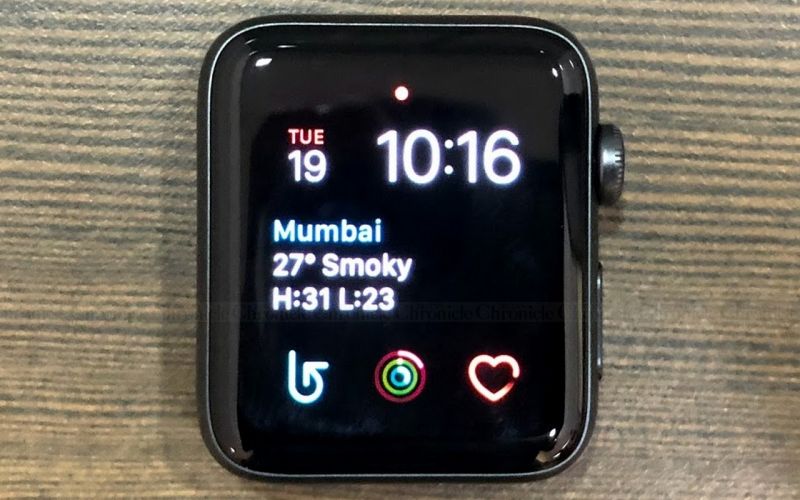 Two other main highlights of the Series 3 Watch are power efficiency and altitude measurement. The Watch 3 has received a faster S3 dual core processor which is highly power efficient, thus helping reduce power consumption and strain on the battery life. The new processor is said to be 70 per cent faster than the older generation. A new W2 wireless chip also made its entry in the Series 3. This chip delivers better Wi-Fi and Bluetooth connectivity — we did notice that the Series 3 (in comparison to the older Series 2 Watch) does not randomly lose connectivity anymore. And yes, the altimeter now takes debut on the new guy. This sensor helps the user to now calculate the altitude or height which affects the way the watch can calculate your fitness. For example, if you climb a flight of spiral stairs, the Watch can now calculate the distance covered accordingly, which was an issue in the previous watch on which the distance would have not showed up. 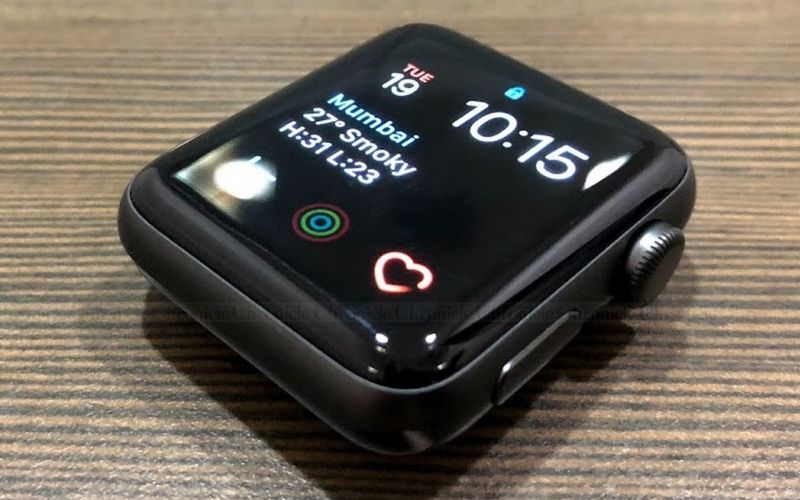 Going deeper, the Watch Series 3 has a storage upgrade too. From the prior 8GB, a new 16GB internal room can hold a lot more of data and music so you can use the Watch paired with your BT earphones for a longer run or trek. The LTE band (Not valid in India) can also help with streaming music from the internet apart from receiving emails and messages from messengers. A direct internet connection also helps Siri respond faster. 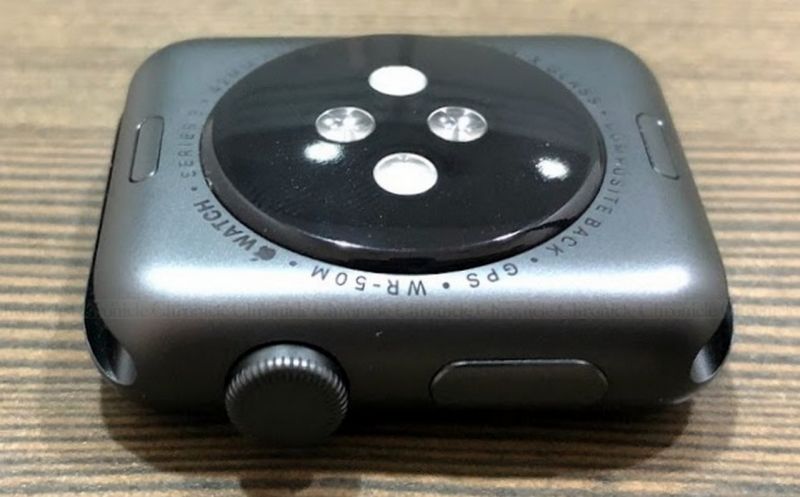 Speaking of Siri, she has received a new update too. Siri now has a voice on the Watch which allows her to speak to you with better confidence. However, a few reviews and users online have claimed that usage of LTE tends to reduce the battery life marginally, but this is normal.

As for the rest of the specifications, Watch Series 3 has quite a lot of similarities with the predecessor. The display stays the same as 1.65-inches with AMOLED and a 390x312-pixel resolution, protected by a Sapphire glass. Bluetooth gets an upgrade from v4.0 to v4.2 and a barometer (sensor) comes alive. 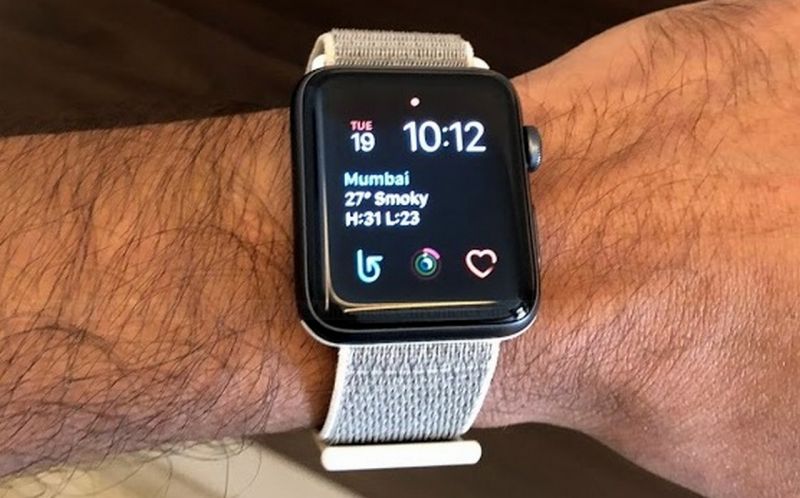 Using the Watch 3 is almost similar to other Android smart watches out there. However, the experience is much more than what Android smartwatches can offer. You can use it as a fitness tracker, an iPod, a wallet (not in India as yet) and even a smartphone (LTE variant only) when using the iPhone in close vicinity. It seems almost like a miniature iPhone on your wrist, sans the camera. But it does not mean you can use it as a phone either. There are limitations — you cannot respond to emails or messages as easily as you can on your phone, and neither can you use it for extended periods for reading, nor watch videos. However, since it is an extension to your smartphone, it can do pretty much to get your work lighter. 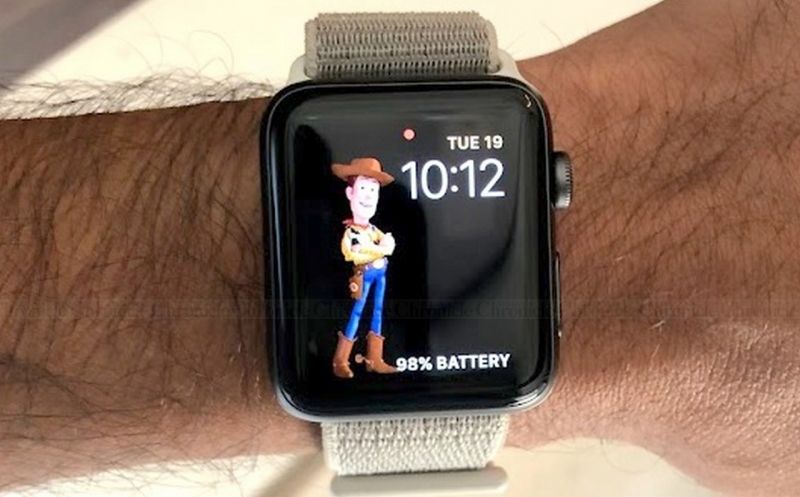 What makes this particular segment of devices a pain is the battery life. The puny battery within the slim profile body can only last you around two days max, depending on the way you use it. Extensive use will drain your battery within the first day itself. However, with a better processor now on the Watch Series 3, you get the same battery life but with a few more features being driven. In our case, being away from all that fitness steam, we are more often busy running around and checking emails and messages than even getting enough time to run for a cup of coffee. 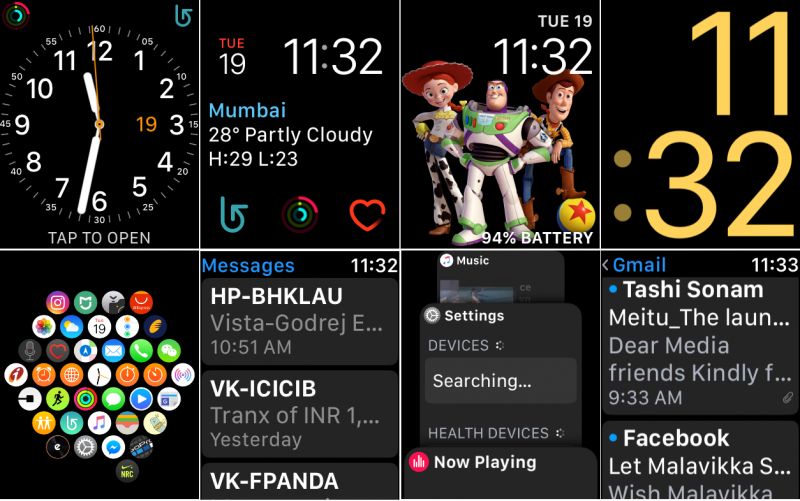 In our standard tests, we managed to obtain almost a whole of two days in battery life — this contained a mixture of usage that comprised of alerts for mails and messages, making casual quick calls, answering a few messages, checking out almost all alerts, messages and emails, and a few more. However, the battery life is still frustrating. You have to keep it for charging almost every night so that you are not left out with just an expensive fancy gadget on your wrist that only tells the time. Yes, when the batter power is minimal, the Watch switches to power saving mode and only displays the time. 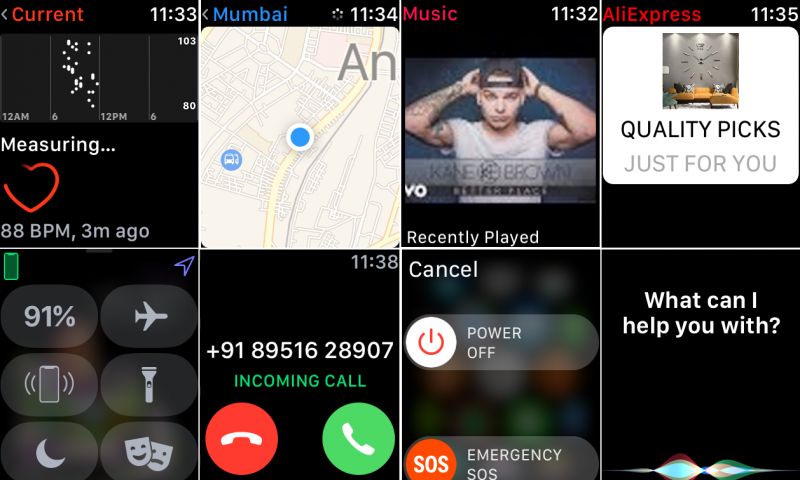 Setting up the device is as good as child’s play and once done, the usage is pretty seamless. All you need to do next is add the apps you would need and toggle the features and notifications that you will need or require on your wrist. Text can be enlarged for easy reading according to the user’s preference. 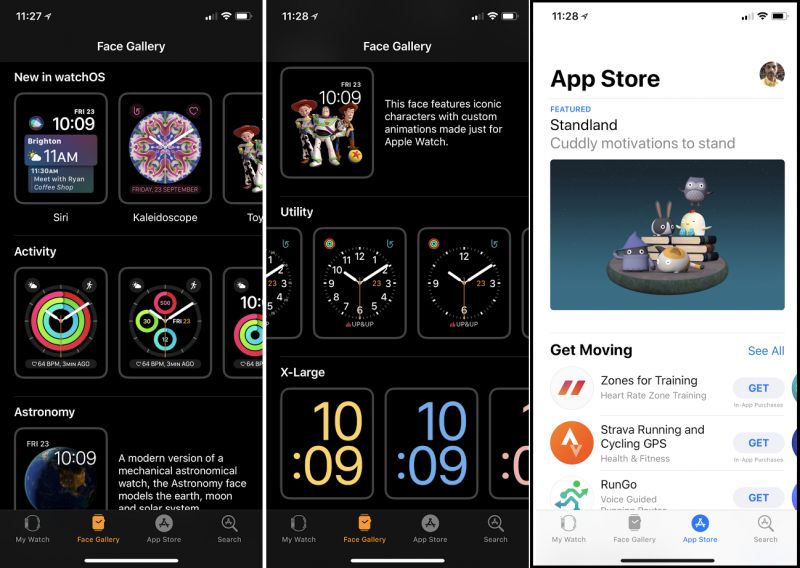 Apps need to be installed via the Watch app on the iPhone. Sadly, you cannot install much apps, not similar apps that run on the iPhone — most are basic for simply alerting you, controlling a few on your Phone or  just plain notifications. What worked best for us is Siri, which made our life a bit easier. However, some times Siri can be a pain — for example, if your address book contains more than one contact with the same name or more than one number in the same contact, Siri asks for which one to connect to, but fails to accept our response. You have to keep trying with a complete command. Sending quick or very short messages is also bliss, but as usual, Siri and her contacts-recognising skills are not yet up to the mark. 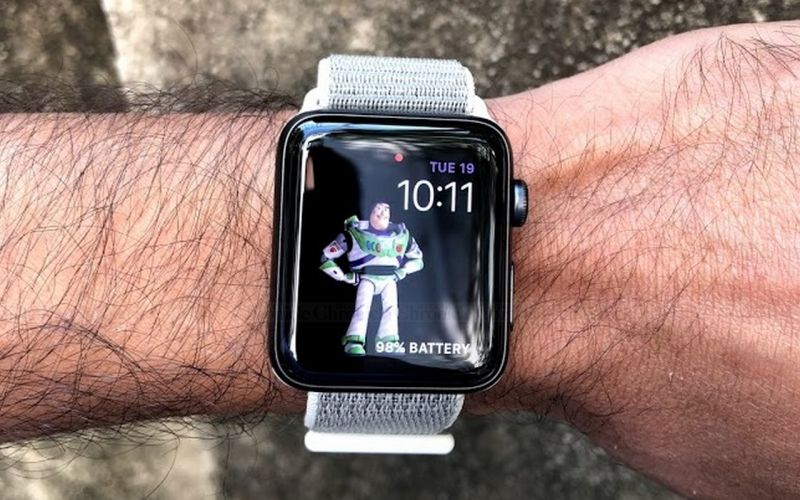 The Apple Watch seems to be mainly aimed for those who are fitness freaks. Without doubt, Watch is presently one of the best fitness wearables money can buy. The Watch can help you set your goals each day to keep you fit at all times. It also pushes you to increase your goal, should it find out that you are reaching your goals with ease. This is one motivation that almost everyone can do with. Another good feature we liked in the fitness area is that the new upgraded app will also inform you how much more you need to walk or run to complete your daily goal. Apart from this, the heart rate monitor also alerts you when you seem stressed or over-relaxed. 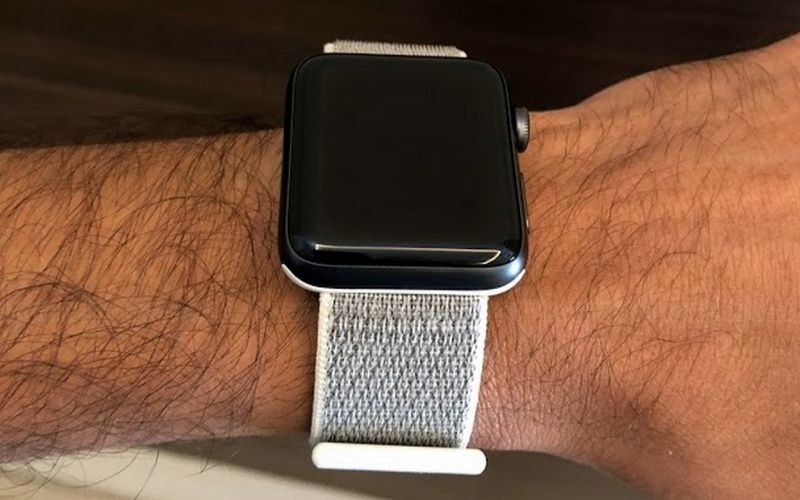 What’s missing on the Watch are a few things here and there. Thanks to Apple for restricting the open source codes, app developers are limited to what they can do. We wish more watchfaces and apps show up since the watch seems to be asking for more apps.

All in all, the Apple Watch, no doubt, is one of the best smart wearables you can bet out there. It is a smart companion/buddy to your iPhone, a tethered device for your smartphone which helps you with your daily busy life. However, the main question is, “do you really need an Apple Watch?’  Well, it would depend from person to person. While some may opt for just the showpiece on the wrist, people like us would think of it as beneficial for work, and fitness freaks would use it to their benefit. But to tap the entire potential of the device, you would rather opt for the LTE version to debut in India. Adding to that, you would also (optionally) have to spend on a wireless earphones if you want to leave your smartphone back at home when out on a run.

But all finally boils down to the price. It isn’t cheap. The Apple Watch Series 3 is available in India in three variants. It starts at a price of Rs 29,900 for the 38mm model and Rs 31,900 for the 42mm Nike+ edition.