Continuing with its festive spirit, TCL is bringing a range of exciting offers on its flagship P8 Series. 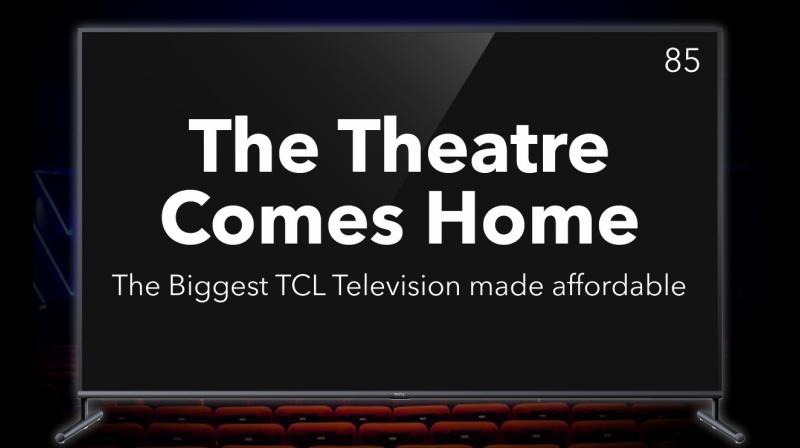 TCL is announced a volley of special prices and discounts on its P8 Series.

TCL announced its plans of continuing the big festive sale bonanza, helping Indian consumers upgrade their home entertainment with AI-powered 4K TVs powered by Android Pie. Even as the festive frenzy comes to a halt in the world of online commerce, TCL will continue to serve its Indian consumers with fetching discounts on P8 Series and other models, making it simpler for them to upgrade the home entertainment experience with artificial intelligence and other smart features.

Making this upgrade to AI-powered entertainment larger than life, TCL will also be launching an 85-inch P8M variant, unlocking the next league of home entertainment solutions for the Indian consumers.

As a brand, TCL has left no stone unturned in adopting an Indian-first approach. With Delhi being the ‘heart’ of the nation, TCL associated with IPL’s Delhi Capitals as the title sponsor this year. Last year, it had also announced an investment of INR 2,000 crore in setting up a GIANT panel factory in Tirupati, Andhra Pradesh. The panel factory will not only allow TCL to expedite bringing its globally-leading innovations to the Indian markets at controlled prices but also will create up to 8,000 jobs in the area. Carrying a 38-years old legacy, TCL is counted amongst the Top 5 TV Companies in India and has successfully earned over 1 million happy customers in India.

In celebration of India’s auspicious festivities, TCL is announced a volley of special prices and discounts on its P8 Series, a range of India’s leading AI-powered 4K TVs. The series take home entertainment to another level altogether with specialised AI offerings. The picture engine controlled an artificial intelligence algorithm enhances the picture quality, brightness and contrast, in real-time. Whether it is an action-packed movie or an intense sporting match, the real-time picture optimisation elevates the viewing experience. This is topped it AI-powered sound engine, which ensures that audio is dynamically updated and enhances the visual effects.

TCL has over 950,000+ hours of premium digital entertainment content, in 25 languages and across 5 genres, available to its customers in India. Furthermore, users can also access the expansive gallery of TCL, owing to its content partnerships with industry leaders like Netflix, YouTube, Hotstar, JioCinema, Eros Now, Zee5, YuppTV, Voot, AltBalaji, and many more.