Mi Band 4 vs Honor Band 5: Should you wait for the Mi Band 4 launch?

While we have no word on when the Mi Band 4 would launch, the Honor Band 5 may seem like a good option, but is it the better fitness band? 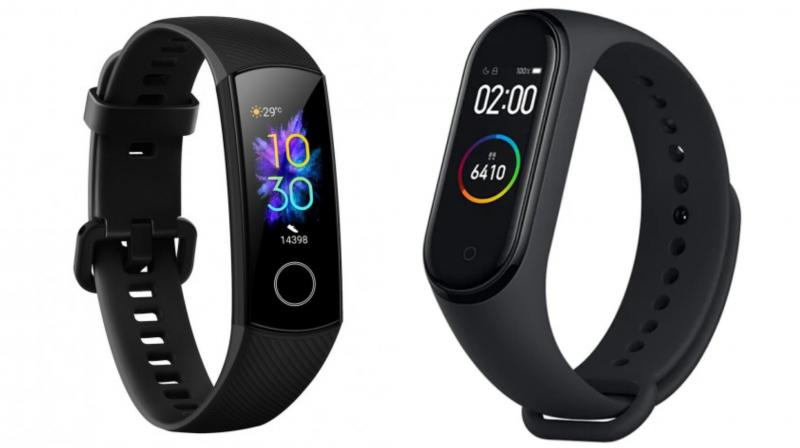 Huawei sub-brand Honor recently launched an upgrade of its own fitness tracker lineup in India, ahead of Xiaomi releasing the Mi Band 4. While we still have no word on when the Mi Band 4 would launch in the country, the Honor Band 5 may seem like a good option. But should you quit waiting and go ahead and buy the Honor Band 5 right now? Read on to know more.

You can get the Honor Band 5 in ‘Midnight Navy’, ‘Coral Pink’ and ‘Meteorite Black’ and it comes with textured straps. The Mi Band 4 on the other hand offers a simple texture-less strap in black, orange and burgundy, but you can get aftermarket bands in many colours and colour combinations. Moreover the Mi Band 4 can even take up straps from the Mi Band 3, thanks to the near identical design.

The only major difference is that the Honor Band 5 strap offers a punch-in mechanism like most common watches do. This is more reliable and secure compared to the snap-on mechanism straps on the Mi Band 4.

The Honor Band 5 has Huawei’s ‘TruSleep2.0’ sleep-monitoring, which allows the band to identify six common sleeping problems. The band can detect your heart-rate and is water resistant up to metres and can identify four main kinds of swimming strokes.

The Mi Band 4 also monitors sleeping patterns and your heart rate. Heart rate detection can be also enabled during activities like cycling and power walking. It is also water resistant and can recognize 5 different styles of swimming.

The Mi Band 4 misses out on the Blood oxygen (SPO2) sensor that some fitness trackers have started to offer, including the Honor Band 5. However the Mi Band 4 offers a lot more customization in terms of ‘watch-faces’, with about 70 in-app options to choose from and hundreds of unofficial faces available on other apps on the play store compared to the Honor Band 5, which does support watch faces but the option is yet to appear on the Indian firmware, according to Flipkart testimonials.

The Honor Band 5 still relies on Bluetooth 4.2. Though functional, it isn’t better and more efficient than the Bluetooth 5.0 found on the Mi Band 4. Features include answering and rejecting calls, phone finder, and app notifications.

Pricing: To be disclosed on launch

The Honor Band 5 sells for Rs 2600 on Flipkart. The Mi Band 4 has not been launched yet in India, but its equivalent price in China translates to about Rs 1700. We expect a likely price of Rs 2000 to Rs 2500 when the band launches in India, since the older Mi Band 3 is currently selling for Rs 1999.

Also read: Mi Band 4 vs Mi Band 3: Should you upgrade?