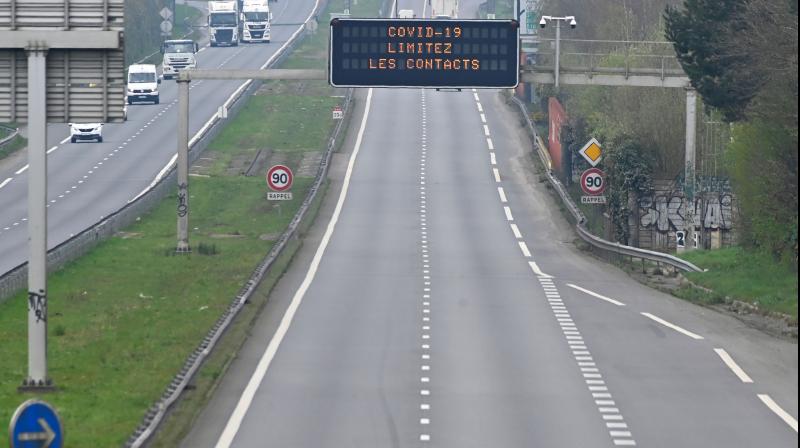 Cars drive past a traffic board reading "Covid-19 avoid contact" near Rennes, western France, on March 20, 2020 amid the spread of the novel coronavirus. (Photo | AFP)

Paris: French Finance Minister Bruno Le Maire accused Amazon on Thursday of placing “unacceptable” pressure on employees after unions claimed the retailer will not pay staff who refuse to go in to work fearing coronavirus contagion.

“This coercion is unacceptable and we are going to make sure Amazon knows this,” Le Maire told France Inter radio.

About 200 of the 1,700 employees at Amazon’s distribution centre near Douai in northern France refused to work on Tuesday, exercising the “right of refusal” in France’s labour code if an employee considers there is a risk to health or safety.

And half of the full-time employees at its Montelimar facility in southeast France walked out on Wednesday, union sources said.

They added that management had indicated these workers would not be paid.

The French government announced strict confinement measures starting Tuesday, under which workers will be allowed to go into the office only if their employers cannot make tele-commuting possible, and then provided special contagion management measures are in place.

Unions say Amazon has failed to ensure that employees can remain one metre (3.3 feet) from one another as recommended by the authorities, and that face masks and sanitising hand gels are in short supply.

“In some places it’s impossible to maintain the safe distance, in particular in the changing rooms,” said Guillaume Reynaud, a CGT union official at the Montelimar site.

Amazon has disputed the claims, saying it has reinforced cleaning measures and taken steps “so that employees can keep the necessary distance from one another.”

“We are strictly following the government’s recommendations and directives,” it said in a statement.

The US giant has seen a surge of orders in France and other countries where officials have confined millions of people to their homes, with outings authorised only for essential reasons such as buying food.

This week, it hiked hourly pay in Europe by two euros, while pay in Britain was increased by two pounds. It also lifted hourly pay by $2 in the United States, where it plans to hire some 100,000 people to cope with the strains on its workforce.