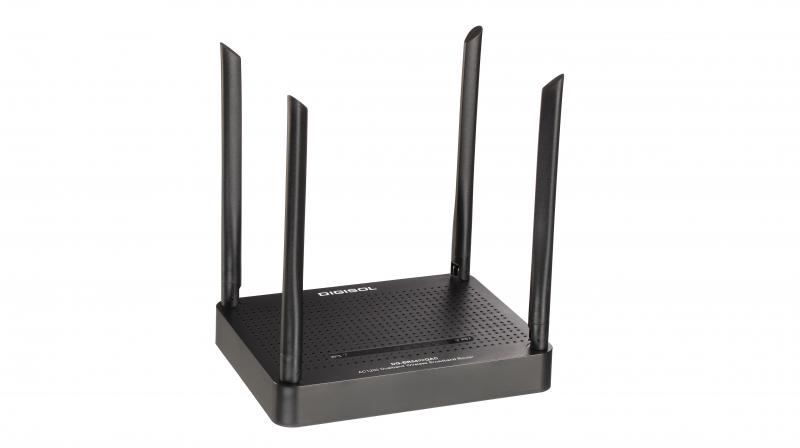 Like most contemporary routers, it operates over two alternate bands — 2.4GHz and 5GHz.

Six companies came together in 1999 to form the Wireless Ethernet Compatibility Alliance offering the technology that came to be known as Wi-Fi: wirelessly distributing data and Internet across home and office, at a top speed of 10Mbps.

Today, as the industry marks 20 years of Wi-Fi, speeds have improved 100-fold to over 1 gigabit/sec and some 30 billion devices worldwide are wirelessly connected — almost certainly including a few in our own homes. Indeed, with the average family sharing the use of a PC or laptop , a TV and a few mobile phones at the very least, it is difficult to do without a broadband connection and a modem-router combo (often a single device) to "route" the data through the air, across the home.

The router often supplied by the data connection provider tends to be the most basic kind: with the average apartment extending across 2 bedrooms and a hall, such entry level routers are not good enough to reach all corners. It is smart to pay a little extra upfront and invest in one's own router which offers the best current speed and the best range.

I have recently tried an India- designed product from Digisol, the AC1200 Gigabit dual band wireless broadband router model DG-BR5411QAC. "AC" indicates it offers the current best speed in Wi-Fi and adheres to the standard 802.11ac, which theoretically is capable of transferring data at up to 867Mbps. Since the top data speed offered by fibre optic data providers for homes in India is 1Gbps or 1000Mbps, this model is reasonably future proof.

Like most contemporary routers, it operates over two alternate bands — 2.4GHz and 5GHz. The former is better for getting through walls, while the latter is faster. The router dynamically selects the best band to reach your PC or any other device. But more importantly, the AC1200 sports four antennas which means better reach. Previously I used a dual antenna router — but had to invest in a Wi-Fi extender costing another Rs 2,500, to reach the farthest room.

Now with this new 4-beam router, I no longer need this extender. You can ensure that your network is private by installing the WEP encryption with your own password. Installation is fairly easy though there is no mobile app mode which many routers offer today. Still, good value at Rs 3,999.

Wi-Fi versions have been identified by a letter or pair of letters appended to the wireless standard 802.11. Thus the earliest version of 1999 was 802.11b. Then came 'a', g', 'n' and the current standard 'ac'. Each iteration is faster than the earlier one. Now the Wi-Fi Alliance has decided to replace the letter suffixes with numbers. The new standard due for rollout this year — 802.11ax — will therefore be known as Wi-Fi 6— being the sixth version. Today's 'ac' version is thus Wi-Fi 5 and so on. Wi-Fi 6 will support speeds between 1.1Gbps to 4.8Gbps making connections 4-10 times faster than the best we enjoy today, and more reliable in crowded areas.