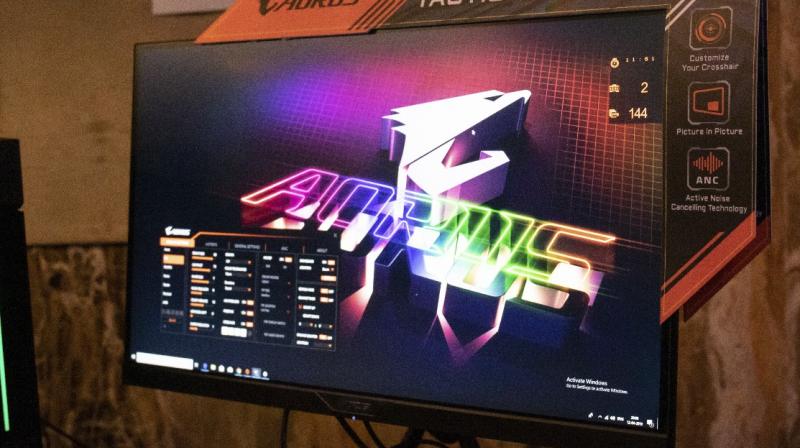 The AORUS AD27QD is the world’s first tactical monitor.

AORUS is a premium gaming brand powered by GIGABYTE. During the Event, invited guests got a chance to experience AORUS AD27QD which is the world’s first tactical monitor with AORUS exclusive features including Active Noise Cancelling (ANC), Black Equalizer, Aim Stabilizer, GameAssist, AORUS Dashboard, OSD Sidekick.; Gamers can have a huge advantage over their enemies with these out of the box features of AORUS Monitor as this is not just another Gaming Monitor but Tactical Gaming monitor, equipment that will let gamers control the pace of the game in a better way.

For extreme overclockers and gamers, GIGABYTE offers extreme performance in Z390 AORUS XTREME WATERFORCE 5G Premium Edition bundle which delivers all cores at the frequency of 5.1GHz and higher on Intel Core i9-9900K processors pretested and paired with this  Motherboard. This flagship motherboard features top-of-the-line heat dissipation with striking aesthetics, drawing out the best performance from Intel Core i9-9900K processor which has been handpicked and pretested for high frequency overclocking, this ensures that every Z390 AORUS XTREME WATERFORCE 5G bundle can hit 5.1GHz at all cores for next level overclocking and performance.

The newest in the product league is AORUS RGB AIC NVMe SSD with mainstream storage capacity options that can also be experienced in the event. AORUS RGB SSD showcases colourful, digital LED lighting and is the first SSD on the market to have full lighting synchronization with motherboards and graphics cards. The new SSD fulfils the GIGABYTE standard for durability and reliability, having undergone rigorous testing to ensure that users enjoy only the best and most stable SSD performance.