This is the biggest display of its kind and features 16 times the amount of pixels found in a 4K television. 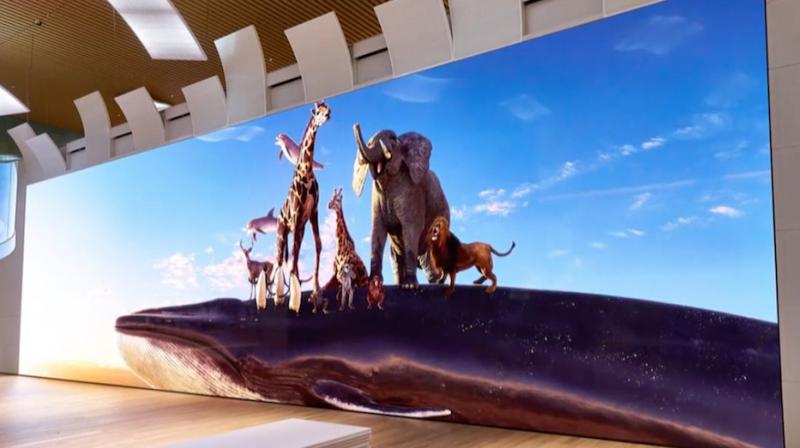 Sony relates this display as a 'window to the world.' (Photo: BBC)

This year we have seen televisions as much as 8K displays unveiled and in a rather familiar move by the Japanese tech giant, Sony has pushed the envelope by showing off a huge 16K resolution display in Japan. To get a better idea, the 16K panel features 16 times as many pixels found in a 4K UHD TV and as much as 64 times the amount of pixels found in a typical 1080p TV. To simplify this, it means that it can display a lot more detail than anything that’s available as of now.

As per a report by the BBC, when Sony displays it, users will get to view content on this screen without any blurring even though its size is larger than a bus.

An expert speaking on this display states that it will take decades for the 16K tech to be freely available in consumer products.

Apart from having an ultra-crisp display, it is also absolutely massive measuring 63-feet by 17-feet and is being installed at a research facility that’s being built for Shiseido, a Japanese cosmetics brand in the city of Yokohama. The TV is said to be so large that it will stretch between the first and second floors.

While the recently announced 8K display from Samsung utilized a single display, this model from Sony is made using multiple modular panels. Since they are bezelless, the modular panels are put together to give off the impression that it’s a singular screen.

Sony has termed the tech used in this television as Crystal LED which is the company’s branding for micro-LED display tech. The LED used in this 16K display does not require a backlight but it's still brighter than conventional OLED displays yet being able to achieve richer blacks.

At present, the high manufacturing costs would not enable this display to be made available for widespread use; but for now, Sony is making lower resolution Crystal LED displays for use in car showrooms, cinemas and theme parks.