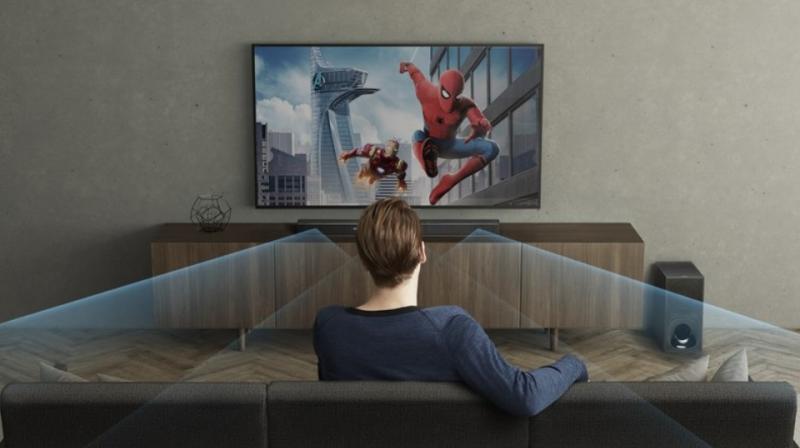 The recently launched HT-Z9F sound bar by Sony is the first in India to feature Dolby Atmos sound output.

Ever since web streaming content became popular in India, urban households have been investing in home entertainment systems that include large screen TVs, high-resolution content and sound systems to complete the sight and sound experience. By no means has this trend eaten into the culture of movie going, rather it has made us consume more content than ever. The strange thing about large screen TVs is that few of them churn out sound commensurate with the size of the TV, often demanding the need for supplementary speakers in the form of sound bars.

The recently launched HT-Z9F sound bar by Sony is the first in India to feature Dolby Atmos sound output. Without having to install overhead speakers, Sony has made it possible to provide immersive sound for any form of content, from music to movies to games to sports. The concept of surround sound means the horizontal circulation of sound from the source, giving a perception that sound is travelling to your ears from the sides as well as the centre. With the HT-Z9F, Sony has incorporated a proprietary technology -- Vertical Sound Engine -- where the sound bounces top to bottom to provide a vertical flow. In conjunction with regular front surround, the vertical surround adds a new dimension where sound now flows from sides as well as the top, completing the aural experience.

We spent some time playing different types of content and discovered that it works best with a better quality of sound. Content that was created with Dolby Atmos in mind (which currently stands at around 500 titles in 8 Indian languages), sounds very impressive and immersive. Interestingly, the 5.1 channel sound bar is able to beef up content which has basic HD sound or older titles that have not-so-impressive sound, by invoking a real-time software algorithm that analysis the different elements of sound and boosts the right component. Sony has also added functionality for both Amazon Alexa and Google Assistant, which means you can speak your commands to skip a track, increase volume etc -- and also use the soundbar orally, to get any other information.

Design-wise, the Sony HT-Z9F is minimalistic and sleek, and for all of its features and a specially designed remote with easy preset buttons, it is available from this week for Rs 59,990: an ideal buy for those who take their video content viewing seriously.  If you are truly fastidious when it comes to sound, Sony also offers a pair of matched rear speakers (SA -Z9R) for Rs 9990 extra.