Apple’s smart Siri speaker is supposedly the best in audio quality and tech, but has restrictions enough to put you out of reach. 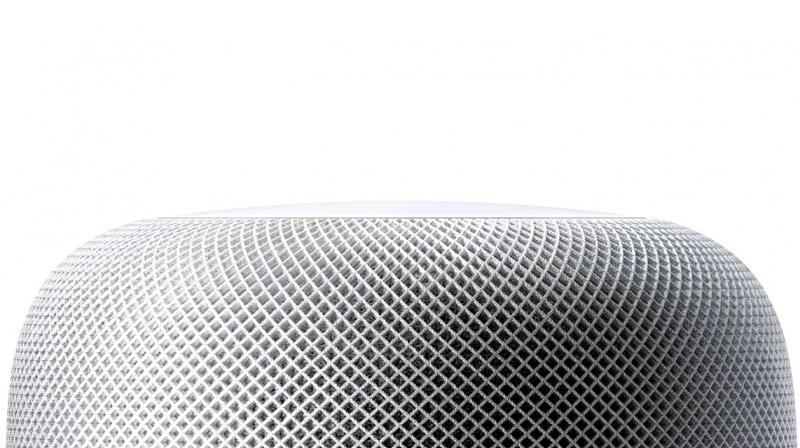 Apple’s sound engineers have also added that extra special feature that makes the speaker measure the position of the subwoofer and reflects beams accordingly to make sure that the audio quality is perfect each time — even when the music is playing.
Rating:

Firstly, no — Apple did not launch the smart Siri Speaker HomePod in India. However, many reviews from our tech comrades abroad who have had the chance to use it extensively post the launch have given their verdict. The new speaker is out to wipe out the existing smart speaker database, but falls short of Apple’s signature sandboxing and limitations. Sadly, there’s one flaw that also puts the Siri speaker under the privacy radar — voice recognition. 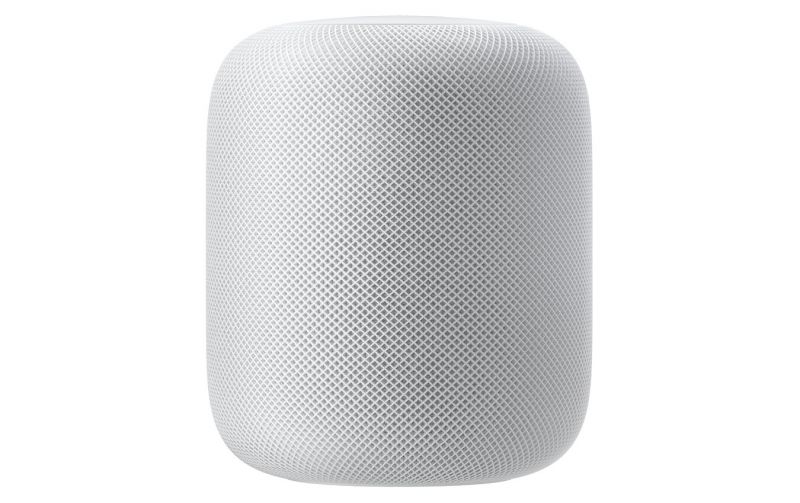 Well, Apple has done it several times — presenting something that is a class apart. With rich gadgets and equipment, the premium tag on the products definitely puts the common man out of reach on Apple devices. And with the HomePod, the same speaks further. Apple’s HomePod was released earlier last month and many online reviews have been speaking against rushing to purchase it — unless you are completely into the Apple ecosystem. The HomePod is like most smart speakers out there. However though its intelligence and technology is superior than the others, Apple has locked in the usage to its own ecosystem. 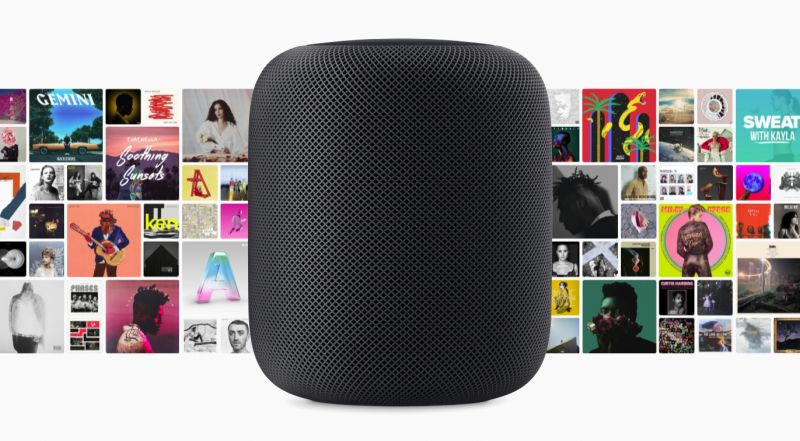 Standing tall at 6.8-inches and with a diameter of 5.6-inches, the round speaker looks very simple, yet stylish enough to fit any room. The speaker weighs around 2.5Kg and comes in two colours — Space Gray and White. The HomePod gets a soft fabric coating all around, but the top sports a touch display, which pretty much does nothing except allow for a few touch controls and a small display of colours.  The speakers within are too many, but for a reason. Apple has crammed in seven tweeters that fire outwards from the bottom area and a 4-inch top-firing subwoofer with its own built-in amplifier system and a self-contained power supply unit, making the HomePod weigh in at a good 2.5Kg. 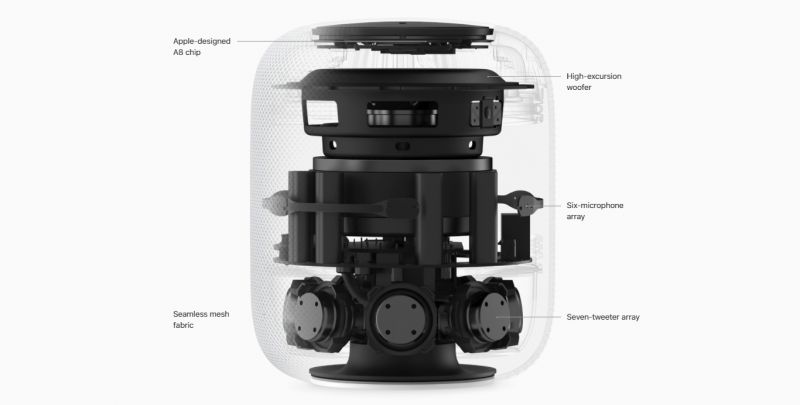 Adding to audio listening prowess, there are six microphones around the centre for Siri and one additional mic that sits inside the speaker to measure the distance from its ambient surrounding surfaces. This additional microphone is automatically activated, when powered on, to detect the surrounding objects and tune the audio performance to deliver the best audio possible. Additionally, thanks to a built-in accelerometer, the speaker also re-calibrates itself when picked and relocated to another area. All these calibration steps are done in under 10 seconds and the HomePod is ready to deliver its performance. To go even further, Apple’s sound engineers have also added that extra special feature  that makes the speaker measure the position of the subwoofer and reflects beams accordingly to make sure that the audio quality is perfect each time — even when the music is playing. 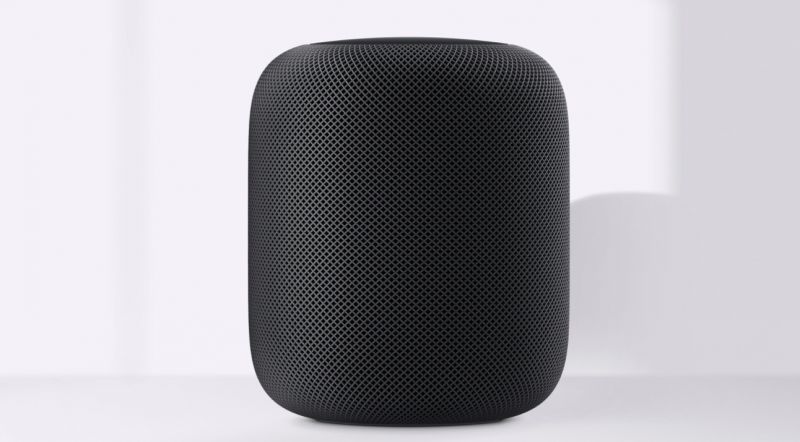 As for the performance, the audio speakers are said to be highly above average, but not as much that it can outdo others in the market. The Verge’s review states that the audio quality is definitely better than its rivals, but not enough to make that purchase, considering the shortcomings of the HomePod — which will be explained ahead. In short, regular people who just enjoy casual everyday music will find it exciting, but audio buffs will find almost no difference. 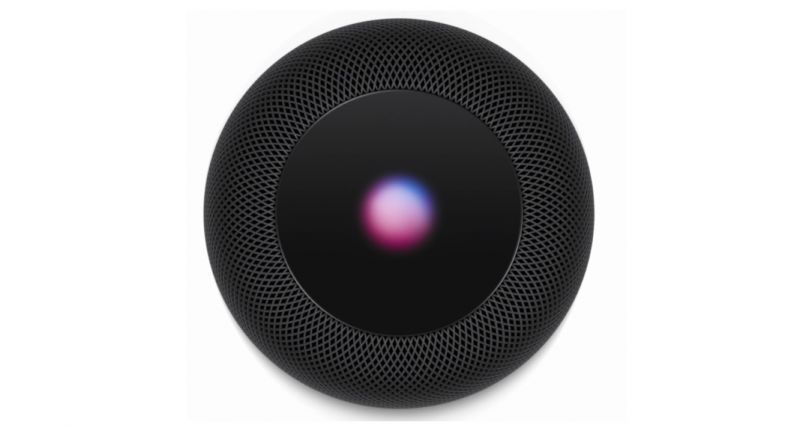 As for the features, Apple’s Siri-based HomePod has almost everything missing when compared to rivals such as Amazon’s Alexa, Google’s Home and a few others. For example, the HomePod has a display which cannot do anything but just control itself via touch. Tap or hold + or – for volume up/down, Touch and hold for Siri, Tap to play/pause music or Siri, Double-tap to skip and Triple-tap to skip back are all it can do. Unlike the Echo Show or the Echo Spot, the display shows just some blurry images.

Adding to the sandboxing on the HomePod, the Siri-smart speaker will restrict the usual non-apple crowd — it is not compatible with anything that does not use iOS, and locks itself to only Apple Music and subscriptions from iTunes and Beats Live Radio. So if you are thinking that you could use services such as Spotify and alike, you should think twice. This is the present status, but will all depend in future if Apple opens up its service subscription models and device compatibility so more people could look into the speaker for their home. 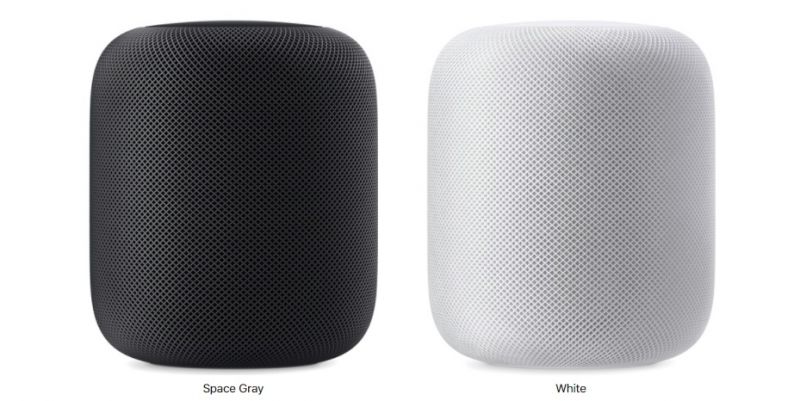 And a flaw that was reported by The Verge is a bit too much to make one reconsider opting for one of these — even by Apple users. The HomePod, unlike Amazon’s Alexa or Google’s Assistant, cannot recognize individual or multiple voices. Surprisingly Siri on iPhone has the ability to recognize voices too, but the Siri on this speaker does not. The HomePod will simply take commands from every user who talks to it. And if you are in the Apple ecosystem, plugged into the same home/office Wi-Fi network, the HomePod will give away your private messages to anyone who asks it.

Shown in the video below by The Verge, the HomePod simply read out all the text messages from the user’s phone to a third party who had access to the speaker, without even the messages’ owner knowing about it. All the third party needed to do is ask Siri to read out the messages.

The Verge recommends that until Apple resolves this issue, you should turn off the ‘Personal Requests’ option on your phone’s settings if you are using the same on a home network where you are living with roommates, family members or with multiple people around.

You can use the HomePod for controlling your IoT devices aound your home, but only if they are compatible — unfortunately, you cannot control them as efficiently. You also cannot use it as a Bluetooth speaker.

Restrictions are far too many, forcing Apple to probably make huge changes in their firmware or simply come with a better HomePod next. Apple’s sound engineers have definitely made a great audio speaker, but the restrictions on usage are sadly putting the HomePod on the ‘should I really consider this one over others in the market’ list.

Well, the above experiences are based on findings from The Verge. What Hi-Fi? also speaks in favour of superior audio quality, but also agrees on the suffocated Apple eco-system restrictions. The NewYork Times also claims ‘Don’t rush to buy I.’ Read their reviews for more in-depth information of their findings.

Apple’s HomePod sells at around $349, which is pretty much expensive when considering rival pwesonal voice assistant-based smart speakers from Google or Amazon.

Apple has not yet announced the speaker for India. We are waiting for some news from Apple’s side for the Indian launch to witness how it performs.

Disclaimer: The Apple HomePod is not tested/reviewed by Deccan Chronicle. The above information is purely based on reviews and findings from the mentioned tech websites respectively.

The Verge:  “The HomePod is a remarkable new kind of audio device. It does more to make music sound better than any other speaker of this kind has ever done before, and it really, truly works. But unless you live entirely inside Apple’s walled garden and prioritize sound quality over everything else, I think you’re better served by other smart speakers that sound almost as good and offer the services and capabilities that actually fit your life.”

TechCrunch: “The HomePod sounds great but on the surface, it’s debatable whether it’s great enough to justify the limitations of its smart features when compared purely on those merits and not as a component of the Apple ecosystem. However, if you’re an Apple Music subscriber, the equation instantly plops in the other direction: it’s near useless to buy any other speaker and this one sounds great, so why not. As the owner of a collection of shoes that is large enough to be known to cause visitors to exclaim “Imelda Marcos!” and pass out, I am the last person to make generalizations about what people feel it’s worth spending their money on. But if you own an iPhone, an Apple Music subscription and at least one HomeKit device, then you are the target market for a fantastic sounding $349 speaker that works best with all of that stuff.”

What Hi-Fi?: “The HomePod, then, is not perfect. In fact, any one of its flaws could be a deal-breaker for you, depending on your circumstances and expectations. But equally, each flaw is individually small and niche enough there’s every chance that you won’t bump up against any of them at all. You will need to already be an Apple user to even consider the HomePod, and Apple Music needs to be your default streaming service for you to get anything like the best out of it. So if that sounds like you, the HomePod is the party-rocking, musical horizon-broadening smart speaker you’ve been waiting for.”

The New York Times: “The HomePod, which costs roughly three times its competitors and arrives in stores this month, is tough to recommend to you, dear reader.”

C/net: “Apple's HomePod won’t slay Amazon Alexa out of the gate. But if you’re an iPhone user who prizes sound quality above all, you should seriously consider this speaker.”