The first home products to offer the superior speeds of a new wireless standard are here. 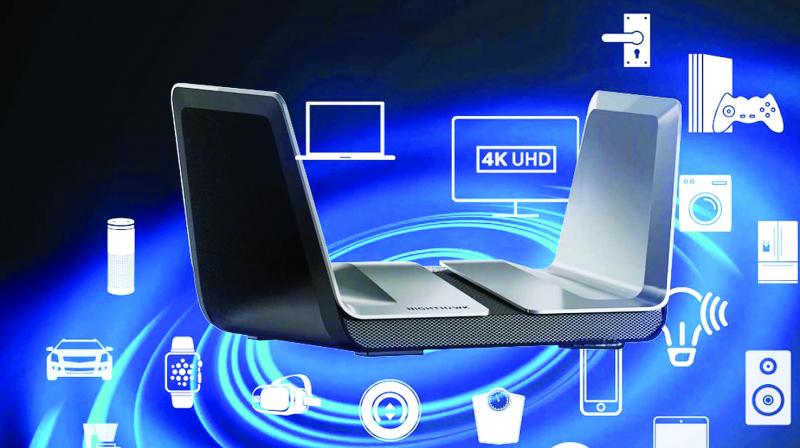 They call it the Red Queen Effect and it is turning out to be a mantra of wireless communications in home and office.

Lewis Carroll's Alice in Through the Looking Glass  is taught a lesson by the Queen: “...We must run as fast as we can, just to stay in place. And if you wish to go anywhere you must run twice as fast as that.” They call it the Red Queen Effect  and it is turning out to be a mantra  of  wireless communications in home and office.

We were only recently offered  home WiFi speeds of  100 MBPS by  broadband service providers. And now  we are being told:  ‘That's all history. Get ready to work (and play) with 1000 MBPS — that's  1 GBPS.’  Gigabit Internet is here. Just  weeks ago in this space, I had  shared a heads-up that a new avatar of  the wireless communication  standard to be called WiFi 6 was coming soon.   Well, soon is now:

Last week two companies rolled out  WiFi 6 technology in India:  Netgear became the first  maker of  consumer routers to unveil products working  at the zippier speeds of the new standard  — up to 5 GBPS max... in practice about 4 times faster than the fastest router today.

And in a complementary announcement, Aruba, a networking company of  Hewlett Packard,  announced the industry's first WiFi 6  access points for service providers —   used to create WiFi hotspots in public places.

I have been trying out one of the first Netgear WiFi 6 routers to reach India — the Nighthawk  AX-8 (RAX80) — and it is a  disrupter, not least in its aerodynamic shape that  hides the antennae which create 8 separate WiFi streams —   four in the 2.4 GHz band and 4 in the 5 GHz band. It's not just the 4-fold  speed boost it can  offer: A clever new technology  called OFDMA or Orthogonal Frequency  Division Multiple Access  complements MU MIMO or  Multi User Multiple In Multiple Out. Forget the tongue-twisting jargon: the net effect is:  no matter how many devices you tag on to your home WiFi network and how heavy their data demand, they will all get equal and simultaneous attention — instead of waiting in queue to be served.   Think of it as a congestion-free expressway instead of a log-jammed street.

One confession: I could not honestly test the WiFi6 speeds with the AX-8 in my home  because no one offers WiFi 6 speeds — yet. To confirm the speed, I went to the Bangalore office of Netgear and tried  the router there. To check out a device, I used a Samsung Galaxy S10, the only phone in the world,   that is WiFi6-ready. And sure enough, a speed meter that is helpfully provided by the Netgear app, showed the data speed  crossing  into the gigabit range...  almost as exciting as seeing an aircraft crossing the sound barrier to hit Mach 1!