The Modicare Enviroglobe can suck up harmful radiation in your home or office. 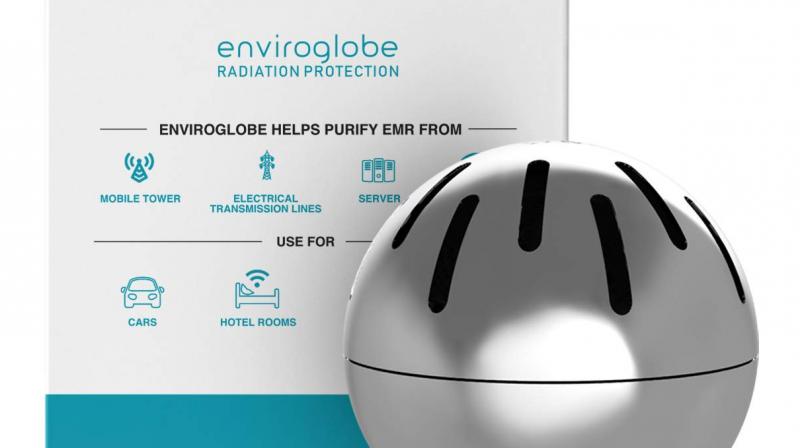 We are constantly exposed to electromagnetic fields creating a blanket of harmful rays, which has been likened to smog. Only this one is unseen. They're calling it electrosmog.

There's a new unseen danger out there. Our daily lives are centred on wireless communication technology -- from the laptops and mobile phones we use, the routers that create our home WiFi hotspots to the server rooms in offices. And then there are the nearby mobile towers and the high tension wires close to our homes ...all spewing out radiation. We are constantly exposed to electromagnetic fields creating a blanket of harmful rays, which has been likened to smog. Only this one is unseen. They're calling it electrosmog.

At festive seasons, it's not just the air pollution that is worrisome. There is a huge spike in electromagnetic radiation as millions of new electronic gadgets are bought and used.

Most of these devices come with compliance standards like SAR or Specific Absorption Rate ratings, which is essentially a measure of how much electromagnetic energy gets absorbed by the body. All phones and devices sold in India are SAR-compliant which means they are safe to use. However, the same cannot be said about mobile towers and server rooms. If you happen to work in an office next to a server room, chances are you are exposed to harmful radiation, which could be taking a toll on your body. From disturbed sleep quality increased stress levels, constant fatigue and headache. Even if the scientific evidence is not very clear, the danger is worrying and not worth neglecting..

Cashing in on this fear, direct selling company Modicare has launched in India, a product called Enviroglobe that helps reduce the risk of radiation in your homes. It claims to absorb harmful radiation and make its frequencies compatible to the human body. Enviroglobe generates random waves at higher frequencies, which carry the constant waves emitted from gadgets in a random fashion and sync them to the frequencies of the body’s waveforms, nullifying the effect of harmful radiation. It is a palm-sized, globe-shaped steel-encased device, less than half a kg in weight, that is effective within a 350 square feet radius and charges with sunlight in about 15 minutes.

Is the issue of electromagnetic radiation genuinely that bad? Maybe, maybe not, but why take a chance? Rs. 4500 seems like a small price to pay to be safe, rather than sorry.