JBL Boombox review: Bringing retro back, with a superb punch

A speaker with a throwback design intended to take quality music listening outdoors. 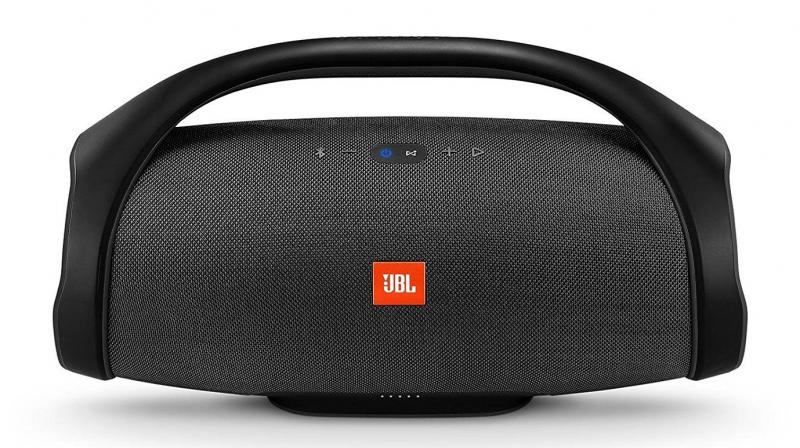 The term ‘boombox’ has had an intrinsic effect on the rise of hip-hop music. These portable audio systems were predominant in the ‘80s and ‘90s where people would tote them on their shoulder while blasting out their favourite tunes. While this gave rise to the hip-hop sub-culture, it was also essential in the rise of the popular dance form — break dancing.

The JBL Boombox is a tribute to that era and not only is it massive, it also features retro styling along with being equipped with modern technology — Bluetooth and a built-in power bank, apart from being waterproof. Let’s take a look and see if JBL can bring that trend back with the Boombox. 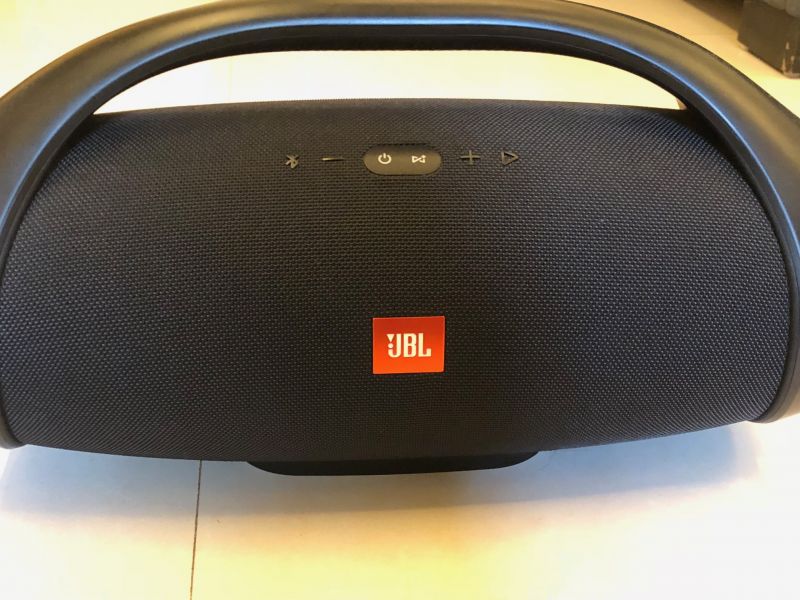 We have tested a range of portable Bluetooth speakers here that also happen to be waterproof. The common denominator among all of them is that they can be easily carried in a bag. Hence, the term ‘portable.’ The JBL Boombox is far away from that title. The size of this speaker is pretty imposing and carrying it around by its fixed handle (or propping it up on your shoulder) would be a task for most. This speaker weighs in at a whopping 5.5kg and measures 19.5-inches in width, 10-inches in height and 7.7-inches in depth. Hence, carrying it around for longer periods is nigh impossible. 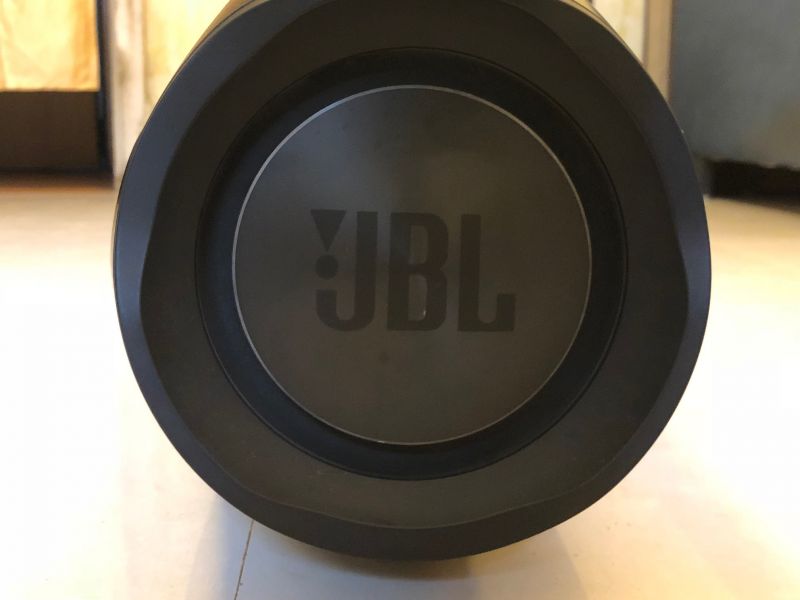 The JBL Boombox comes finished in black and features a cylindrical design. The standout feature is the large attached handle that can be used to lug it around. The only colour that is found here is the JBL branding that’s located at the front of the speaker.

The Boombox's USP is the IPX7 rating. This means that it can be submerged in water for about an hour to a depth of a metre without it being rendered useless. While this seems funny that 'why would anyone want to dip a speaker into water', it makes sense when you are using it around your pool parties. This should ensure that if it accidentally falls into the water, you should not worry about it getting damaged. Also, it can withstand rain — making this speaker a superb investments for outdoor events.

The front and rear of the 'cylinder' are covered with a cloth meshing and underneath them lie the two front-firing 20mm tweeters. The four-inch woofers are located either the sides of the Boombox. The front also is home to a few buttons which include Bluetooth pairing, Power, Connect+, volume and play/pause. The Connect+ button is used for linking up one, or more, JBL Bluetooth speakers to give it a stereo effect. The volume buttons work in concomitance to your phone’s or tablet’s volume control.

On the rear, a bay houses the required connections, and protecting it is a solid rubber flap to keep water and dust at bay. To ensure that no damage is done by water to your speaker, it is necessary that this flap should remain closed as these ports are not water-tight. The connections here are for power, audio AUX, a micro and two regular USB ports. The JBL charges using a power brick that comes included in the packaging and the micro USB port is meant for service personnel only. The two USB ports can be used to charge your smartphones or tablets as the speakers’ built-in 20000mAh battery also doubles as a power bank. Right beside this bay, there is a button for the different sound modes — indoor and outdoor. With the outdoor mode turned on, the bass range is enhanced, no other difference is noticed. This allows the user to get a better audio output especially when out in the open. 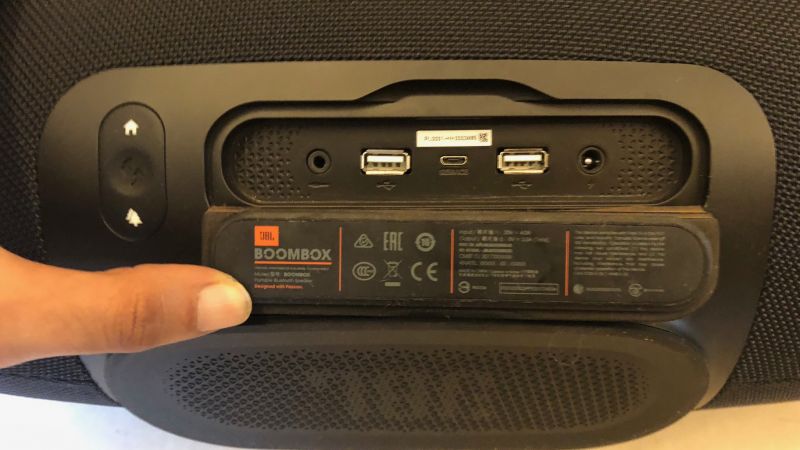 There a battery indicator on the front (at the bottom) of the Boombox which features 5 white LED lights that shows the battery's power status at any given time. The massive 20000mAh battery inside has a battery life of around 24 hours on a single top-up. However, this run time depends on the volume levels the speaker is being used at. When the battery is running out, the LED blinks red, and the speaker has around an hour of battery remaining.

The speaker also runs on an app, available on the App Store or Google Play for iOS and Android devices respectively. Using the app, you get a few more controls such Party Mode or Stereo Mode. With Party Mode, you can play music solely from the JBL Boombox, and with Stereo Mode enabled you can pair one or more JBL speakers to create a stereo effect. Also, with the app, you can switch between indoor and outdoor modes and a few other functions as well. There is no equaliser here and its something we hoped that would be present in order to fine-tune the various frequencies during different genres. However, it is worth mentioning that there is no actual need to download the app to get an enhanced audio experience, but is just for convenience in operation. 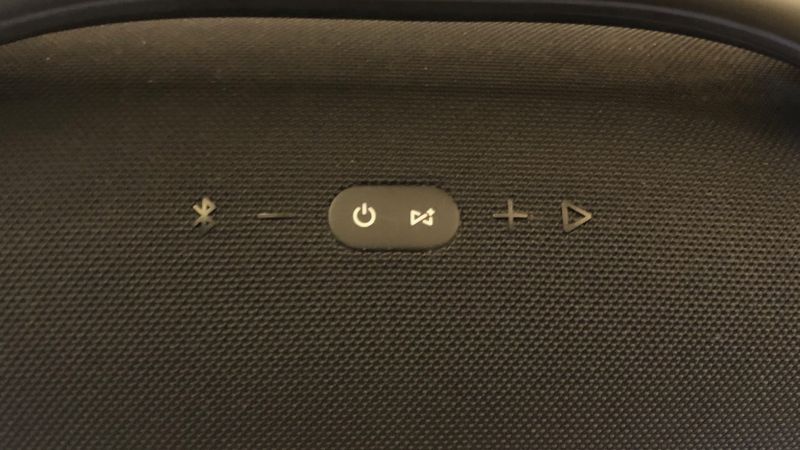 Nowadays, speakers with imposing sizes are built for merely aesthetic reasons, but when it comes to sheer performance, they fail. Upon seeing the Boombox, we were initially worried that the same might be true here. However, once we fired her up, all doubts were put to rest — we were left impressed and in awe. The JBL Boombox doesn’t come packed with features such as having AI or other smart capabilities, but the audio quality was one of the best we have ever heard from a Bluetooth speaker. It literally wowed us from the get-go.

Bass on conventional Bluetooth speakers usually do not pronounce the desired effect; however, for those who love bass heavy tunes, the Boombox, will deliver it in spades, and also keep a balanced sound across the board. At a high volume, the JBL Boombox delivered bass heavy songs with absolute precision and there was no distortion noticed even at higher volumes, this left us more than impressed. Right now, very few Bluetooth speakers are able to deliver on this front. The bass, in particular, is abundant across all volume levels, so even if you’re having a small house party, you will appreciate the music output at even a lower volume. 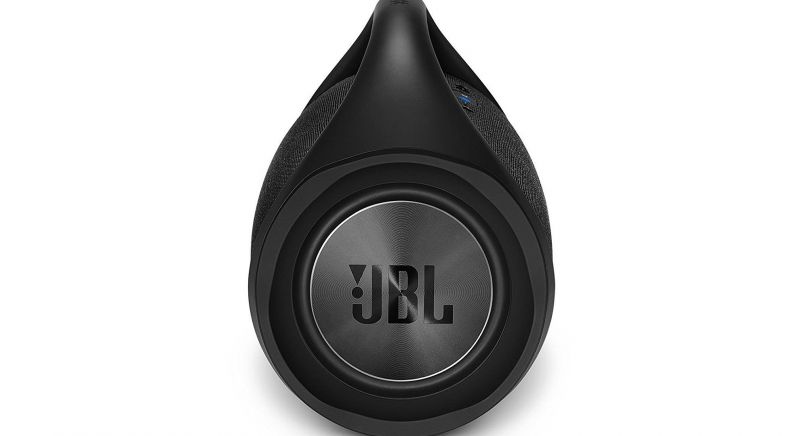 When it comes to highs and mids, the JBL Boombox absolutely nailed it with the highs being very energetic and the mids sounding luxuriant. With vocals, there was a lot of texture and detail and sounds certain elements of the track, that can usually be heard only on a pair of good earphones. Another thing that we liked about the speaker is that it gives out a good stereo effect even though the front-facing speakers are placed closely together.

A thing about this speaker that we liked most was that it can deliver equally great audio quality at both low and higher volumes, without any loss in quality or distortion, respectively. We may not classify the JBL Boombox as an audiophile-grade speaker, but one can argue that extreme bass can skew the accuracy of the sound’s output. However, one thing for certain is that we were left impressed by its soundstage. 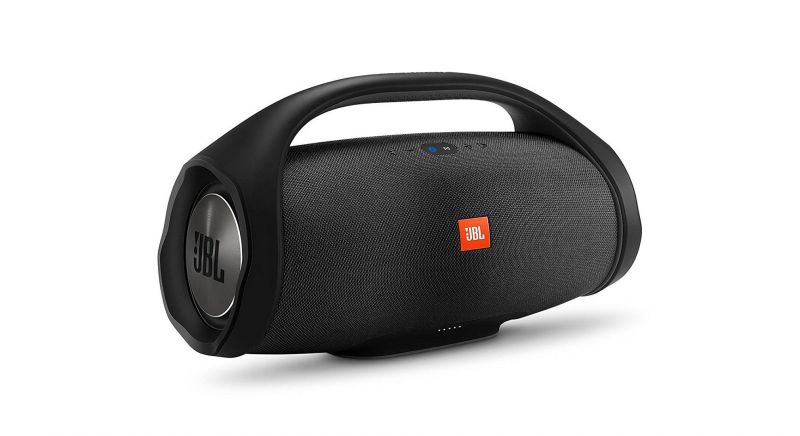 The JBL Boombox is priced in India at a steep Rs 27,999, and at this price point, we know that it is pretty expensive. However, the only true way to gauge the performance of the speaker is to witness it first-hand, which we cannot portray here — you have to try it out to believe us. It does not come loaded with features that probably others may offer, but we probably liked it for its simplistic and straight-forward approach to pure audio performance. The audio quality speaks for itself and it effortlessly delivers on all fronts.

The JBL Boombox is a perfect speaker for those who travel in groups and prefer take their music with them. It is meant for those who need a simple, all-in-one, yet superb performance solution for their home or outdoors. Alternatively, it can be great for a dance studios or dance instructors without worrying about whether the location has a good audio setup or not. However, the only possible hindrance we see is the bulky and heavy weight that one would have to bear with. The JBL Boombox is also a great option for those who wish to have pool parties or simply take it to the beach as the speaker is water-resistant.

Again, we know that the JBL Boombox is expensive, but with audio quality such as this, it has made it to up high to our recommended list. So if you have the dough and are seeking a truly excellent and portable Bluetooth speaker system, then the Boombox should hit the top of your list. The JBL Boombox deserves to be heard.